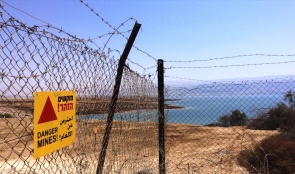 Prior to the start of the UN Conference on Climate Change (COP27), which took place in Sharm El Sheikh, Egypt, between 6 and 18 November, the Israeli Ministry of Foreign Affairs promoted the official delegation it will send to COP27, boasting that this is the State’s “most significant participation since international conferences on this topic began.” The Israeli delegation included the President of Israel, senior officials of various ministers, Zionist parastatal institutions like the Jewish National Fund, civil society, academics, senior officials of the private sector, and entrepreneurs. This year, Israel built its first national pavilion at COP, promoting 10 climate tech companies and hosting more than 30 events.

The delegation weaponised Israel’s long-used greenwashing strategy, boasting about the country’s “leading role” in climate tech and innovation toward climate change mitigation and adaptation, in areas such as renewable energy, gas, water desalination and reuse, afforestation, and alternative proteins.

Such a narrative showcases Israel as ‘environmentally-friendly’, in order to normalize and deflect its climate apartheid and environmental destruction against the Palestinian people, their land and their natural resources. The greenwashing narrative also conceals how Israel’s settler-colonial and apartheid regime, and prolonged belligerent occupation actually reinforces Palestinians’ climate vulnerability.

Israel’s greenwashing discourse has its foundation in the Zionist settler-colonial and racist logic that Zionists are “more advanced and civilised” to develop the land of Palestine than its indigenous Palestinian people, and that they came to Palestine to “make the desert bloom”. At an event titled, “Water reuse to address climate challenges” at the Israeli Pavilion at COP27, the Israeli Minister of Environmental Protection, utilised this narrative, boasting about Israel’s leading role in water desalination and reuse, underlying that “we have established the state of Israel in the middle of the desert. We suffered from water scarcity since the beginning…. We came up with the solution.”

What is Behind Israel’s Eco-Friendly Discourse and “Solutions”?

Israel’s greenwashing strategy puts a blind eye to its direct violation of Palestinians’ ability to develop self-determined resilience strategies of mitigation and adaptation to the climate crisis under its system of settler-colonialism, apartheid and prolonged occupation. This is specifically due to Israel’s policies of fragmentation, the blockade of the Gaza Strip, the denial of the peoples’ collective right to self-determination, development and the appropriation, exploitation and degradation of Palestinian land and natural resources. This has been effected through the exploitation of land, water, natural gas and oil, quarrying, extracting dead sea minerals, as well as depleting Palestinians’ non-renewable and finite resources.

Specifically vulnerable to increased climate hazards are Palestinian communities whose livelihood mostly relies on access to and exploitation of their land and natural wealth, such as farming, herding and Bedouin communities. Around two million Palestinians living under a 14-year-old illegal blockade and closure in the Gaza Strip are also exposed to increased risks to climate related hazards such as water scarcity, and food insecurity. Around 97 percent of Gaza water is undrinkable, and over 60 percent of Gaza households are food insecure. Implementation of mitigation and adaptation strategies is dependent on the Palestinian people’s ability to access and develop their land and natural resources in a sovereign and free manner, which is part of their inalienable right to self-determination.

In addition to Israel’s occupation and apartheid regime’s impacts on Palestinians’ climate vulnerability, there are many Israeli policies and activities which leave direct environmental injustice impacts over Palestinians, including:

While the COP serves as an avenue to address the global climate crisis, many States have often employed the COP to boast about their environmentally friendly initiatives, turning a blind eye to their own regimes of colonialism, occupation, aggression, apartheid, and authoritarianism and how they reinforce social injustices, racial discrimination, and the denial of the people the exercise of their right to self-determination.

The struggle for climate justice cannot be separated from struggles to end all systems of alien domination, including colonialism, apartheid, and occupation. An intersectional approach to climate change-related challenges, should be adopted, to include self-determination, human rights, and social justice.

[1] Rule 74, ICRC customary International Humanitarian Law Database; Hague Declaration concerning Asphyxiating Gases, 1899; Protocol for the Prohibition of the Use in War of Asphyxiating, Poisonous or other Gases, and of Bacteriological Methods of Warfare, 1925 (Geneva Gas Protocol); Chemical Weapons Convention, Article I; Rome Statute of the International Criminal Court, Article 8(2)(b)(xviii).