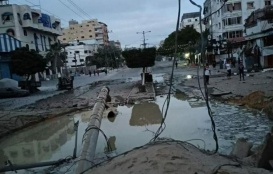 The escalating water, sanitation and hygiene (WASH) crisis had already made the Gaza Strip ‘unlivable in 2020’, as previously warned by the United Nations.[1] In the meantime, Israel’s protracted military blockade has been restricting the entry of ‘dual-use’ materials and supplies, seriously impacting and degrading the WASH situation in the Gaza Strip, and curtailing socio-economic development and amounting to acts of collective punishment against the Palestinian population.[2]

The Gaza coastal aquifer which is the only water resource in the Gaza Strip providing for the needs of 1.8 million Palestinians residing in the Gaza Strip. However, the aquifer is overexploited and 96 percent of extracted aquifer waters are polluted by agrochemicals and wastewater infiltration.[3] The lack of adequate wastewater treatment facilities leaves 35 million cubic meters untreated by year. [4] The absence of satisfactory WASH infrastructure has a direct impact on civilian health. The water-intake average per inhabitant corresponds to 90 liters per capita per day, below the World Health Organization’s recommendations.[5]

Solid waste management is equally a source of concern. Only 11 solid waste service providers operate throughout the Gaza Strip,[6] to manage 2,000 tons of waste per day.[7] Recycling stations and landfills are at capacity, sorting and recycling of trash is not clearly separated, recycling equipment is outdated and ill-maintained.[8] The Gaza Strip has only of two official landfills – Al Foukhari and Johar Ad Dik – located some 500 meters away from the perimeter fence with Israel.[9]  Access to the landfills remains contingent upon prior notification to the Israeli Occupying Forces (IOF), in coordination with the Palestinian Authority. In addition, Israel forcibly controls access to the site, using live fire ammunition. As a result, Palestinians have resorted to establishing informal landfill sites in the Gaza Strip. [10] 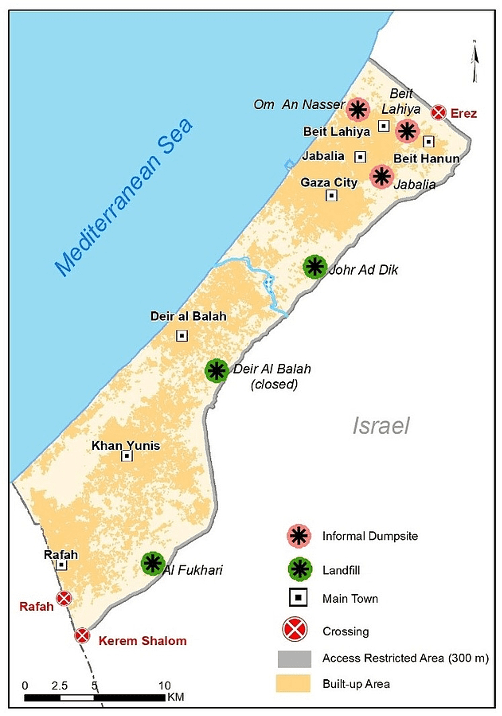 In 2009, the UN Human Rights Council Report of the Factfinding Mission highlighted a widespread Israeli military practice of targeting critical civilian infrastructure throughout the Gaza Strip including water wells, and the use of chlorine to purify the water, causing the discharging of wastewater into the sea, [12] Notably, successive wars on Gaza, especially Israel’s ‘Protective Edge’ offensive in 2014, have had severe detrimental impacts on the WASH infrastructure in the Gaza Strip, whether through direct destruction of WASH facilities and infrastructure, or indirectly by weakening the Palestinian authorities’ capacity to improve and develop an efficient WASH system. The COVID pandemic has also deteriorated WASH conditions and consumed WASH service providers’ capacity to pursue their services. [13]

Throughout the recent Israeli military offensive on Gaza, Al-Haq has reported various incidents directly or indirectly bombing WASH civilian facilities throughout the Gaza Strip. Such deliberate military targeting is not only unlawful under international humanitarian law, but raises dire concerns for the sanitary environment of the civilian population.

On 15 May 2021, in the morning, the IOF targeted, with live bullets and artillery shells, Gaza city’s municipality staff working in the main waste dump, Johar Ad Dik area, east of Gaza city. Fire broke out, and sparked the emission of toxic fumes, forcing the municipality to close the main waste dump, recipient of an average of 1,000 tons of solid waste on a daily basis. The accumulated solid waste is being redirected to the temporary transfer station of Yarmouk, center of Gaza city, which is not designated to support waste for extensive periods. Israel’s targeting of the main waste dump of Gaza city triggered a major health and environmental crisis. To date, the municipality has been in contact with the International Committee of the Red Cross to coordinate the removal of the targeted waste substance, as the Israeli Occupying Power prevents the return of workers to the site. The continuing burning of the solid waste, of type D9, [14] has both created and spread a smoke cloud over Gaza City, raising additional health concerns for the civilian population.[15]

Solid waste management, such as the Johar Ad Dik landfill is essential for maintaining public health and hygiene in Gaza. As temperatures rise, it is feared that uncollected trash or informal depots will emit toxic substances, attract more rodents and mosquitoes and foster flash fires and smoke.[16]

Additional Protocol I to the Geneva Conventions,[22] prohibits the targeting of objects indispensable to the survival of the civilian population during the conduct of hostilities, a prohibition which is also reflected in customary international law. For example, Article 54(2) of the 1977 Additional Protocol I specifically provides: “It is prohibited to attack, destroy, remove, or render useless objects indispensable to the survival of the civilian population, such as foodstuffs, agricultural areas for the production of foodstuffs, crops, livestock, drinking water installations and supplies and irrigation works, for the specific purpose of denying them for their sustenance value to the civilian population or to the adverse Party, whatever the motive, whether in order to starve out civilians, to cause them to move away, or for any other motive” The IOF targeting of civilian properties, resulting in severe collateral damage to WASH structures and infrastructure may amount to a breach of prohibited methods and means of warfare.

Further, the deliberate and indiscriminate destruction of water infrastructure is worsening a situation of great sanitary distress.[23]

Taken together with the principle of distinction between civilian objects and military objects as per Article 52(2) of the 1977 Additional Protocol I,[24] customary law stipulates that “In the conduct of military operations, all feasible precautions must be taken to avoid, and in any event to minimize, incidental damage to the environment.”[25]

Citing General Assembly resolution 47/37 of 25 November 1992 on the “Protection of the Environment in Times of Armed Conflict,”[26] the International Court of Justice has judged the precautionary principle applicable in armed conflict.[27]

Furthermore, Articles 35(3) and 55(1) of Additional Protocol I, also customary law, stipulates that “[t]he use of methods or means of warfare that are intended or may be expected, to cause widespread, long-term and severe damage to the natural environment is prohibited”.[28] As such, the targeting of Johar Ad Dik landfill causing waste-based pollution which is now directly impacting the Gaza Strip, with long term implications for the 2 million Palestinian population therein. [29] Moreover, it aggravates an already deteriorating situation regarding the COVID-19 pandemic, where no specialized treatment system for infectious waste is available, giving rise to additional contagion concerns due to the closure of Johar Ad Dik main waste site.[30]

As the Occupying Power in the Gaza Strip, Israel is obliged to comply with Article 56 of the Fourth Geneva Convention according to which “to the fullest extent of the means available to it, the Occupying Power has the duty of ensuring and maintaining […] public health and hygiene in the occupied territory […].” As such, any military offensive that would disproportionately jeopardize the health and hygiene of the occupied population, is prohibited.

Environmental damage and resulting health implications from the targeting of WASH facilities and infrastructure and through the destruction of the environment and depletion of natural resources, is an unlawful method of warfare and infringes on multiple provisions of customary law, codified in the First Additional Protocol to the Geneva Conventions.

Such practices amount to war crimes and crimes against humanity. Severe damage caused to WASH facilities and infrastructure as a result of the targeting of civilian properties, in the knowledge that such bombing will result in disproportionate, widespread, long-term and severe damage to the environment and public health, may amount to a war crime under Article 8(2)(b)(iv) of the Rome Statute of the International Criminal Law.

Al-Haq urges the Human Rights Council to investigate the targeting of WASH facilities in its fact-finding mission into Israel’s offensive on the Gaza  Strip in May 2021.

[3] UNICEF, “Water, Sanitation and Hygiene Assessment at the Household Level in the Gaza Strip,” 4, https://www.unicef.org/oPt/GVC_WASH_Assessment_at_HH_Level_in_the_GS_final.pdf

[11] OCHA, “Waste Away: Living Next to a Dumpsite,” Humanitarian Bulletin, June-July 2020, https://www.ochaopt.org/content/waste-away-living-next-dumpsite

[16] OCHA, “Waste Away: Living Next to a Dumpsite,” Humanitarian Bulletin, June-July 2020, https://www.ochaopt.org/content/waste-away-living-next-dumpsite

[22] See Article 54, Protocol Additional to the Geneva Conventions of 12 August 1949, and relating to the Protection of Victims of International Armed Conflicts (Protocol I), 8 June 1977, https://ihl-databases.icrc.org/applic/ihl/ihl.nsf/Treaty.xsp?documentId=D9E6B6264D7723C3C12563CD002D6CE4&action=openDocument

[30] OCHA, “Waste Away: Living Next to a Dumpsite,” Humanitarian Bulletin, June-July 2020, https://www.ochaopt.org/content/waste-away-living-next-dumpsite