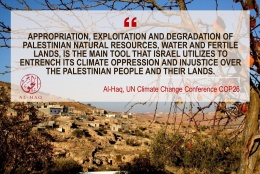 Article 1(2) of the United Nations Framework Convention on Climate Change (UNFCCC)[1] defines ‘climate change’ as “a change of climate which is attributed directly or indirectly to human activity that alters the composition of the global atmosphere and which is in addition to natural climate variability observed over comparable time periods.”[2]

Article 1(1) further describes ‘adverse effects of climate change’ as “changes in the physical environment or biota resulting from climate change which have significant deleterious effects on the composition, resilience or productivity of natural and managed ecosystems or on the operation of socio-economic systems or on human health and welfare.”[3]

Israel’s appropriation, exploitation and degradation of Palestinian natural resources, water and fertile lands, is the main tool that Israel utilizes to entrench its climate oppression and injustice over the Palestinian people and their lands. For Palestinian communities - particularly herding and Bedouin communities - whose livelihood mostly relies on access to and exploitation of their natural wealth, the appropriation thereof exacerbates climate vulnerabilities and prevents their design and implementation of climate mitigation and adaptation strategies, eventually fuelling their forcible displacement.

Addressing Israel’s exploitation of Palestinian natural resources according to an environmental approach constitutes an absolutely essential framework to understand how they constitute first and foremost a climate and environmental justice question. Although the development of international law predated the building of an international legal framework to address the adverse effects of climate change, legal provisions related to the protection of the environment provide a sound legal basis to assess states’ responsibilities in this regard.

Preventing the Adverse Effects of Climate Change: Protection of Natural Resources against Warfare

Principle 24 of the Rio Declaration on Environment and Development states that “warfare is inherently destructive of sustainable development. States shall therefore respect international law providing protection for the environment in times of armed conflict and cooperate in its further development, as necessary.”[4]

Being the de facto, temporary administrator of the occupied territory, Israel does not acquire any sovereignty over its natural resources, which it must administer according to the laws of occupation.

The right to self-determination is affirmed in Common Article 1 of the International Covenant on Civil and Political Rights and the International Covenant on Economic, Social and Cultural Rights, which stipulates that: “All peoples have the right of self-determination. By virtue of that right they [...] freely pursue their economic, social and cultural development.”[12] To this purpose, they “may, for their own ends, freely dispose of their natural wealth and resources [...]” and “In no case may [they] be deprived of its own means of subsistence.”[13]

Sustainable development in a context of shrinking natural resources, through and by means of the implementation of mitigation and adaptation strategies, is ineluctably contingent upon the Palestinian people’s ability to access and exploit their natural resources in a sovereign and unhindered manner.

Conclusion: Towards An Intersectional Approach to Tackle Climate Change

The protection of peoples’ natural resources as provided under international law is an essential basis of action towards the mitigation and adaptation of adverse effects of climate change in territories affected by armed conflicts. They bring important insights as per states’ obligations and responsibilities in terms of the exploitation and damage of natural resources.

However, the climate change legal framework as defined under the UNFCCC, the Kyoto Protocol and the Paris Agreement barely acknowledges the human rights dimensions of climate change. The Paris Agreement, to which both the State of Palestine and Israel are State signatories, makes no reference to situations of armed conflict or belligerent occupation, although it mentions, on a number of occasions, States responsibilities to decrease climate change vulnerability and reinforce resilience. In particular,

The struggle for climate justice is inherently interrelated to the liberation from all forms of alienation and oppression. Tackling climate change, particularly situations of occupation, apartheid and colonization, requires to take a broad, comprehensive and intersectional approach to climate change and human rights, and to bring the rights of peoples at the forefront.

[6] Advisory Opinion Concerning Legal Consequences of the Construction of a Wall in the Occupied Palestinian Territory, ICJ, 9 July 2004, para.114, https://www.icj-cij.org/en/case/131

[8] “The occupying State shall be regarded only as administrator and usufructuary of public buildings, real estate, forests, and agricultural estates belonging to the hostile State, and situated in the occupied country. It must safeguard the capital of these properties, and administer them in accordance with the rules of usufruct.”

[9] “Any destruction by the Occupying Power of real or personal property belonging individually or collective to private persons, or to the State, or to other public authorities, or to social or cooperative organizations, is prohibited, except where such destruction is rendered absolutely necessary by military operations.” Convention (IV) relative to the Protection of Civilian Persons in Time of War, 12 August 1949, Article 53, https://ihl-databases.icrc.org/applic/ihl/ihl.nsf/ART/380-600060?OpenDocument

[10] Protocol Additional to the Geneva Conventions of 12 August 1949 and Relating to the Protection of Victims of International Armed Conflicts (Protocol I), 8 June 1977, Article 55(1), https://ihl-databases.icrc.org/applic/ihl/ihl.nsf/ART/470-750070?OpenDocument