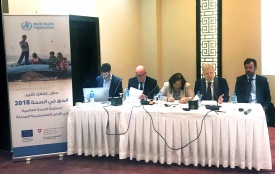 On 8 October 2019, Al-Haq participated at a launch event for the new report by the World Health Organization (WHO) in the occupied Palestinian territory on the Right to Health 2018, which examines obstacles to achieving the highest attainable standard of physical and mental health for Palestinians living under Israel’s prolonged military occupation in the West Bank, including East Jerusalem, and the Gaza Strip, including barriers to adequate healthcare provision, movement and access restrictions, denials of the underlying determinants of health, and attacks on healthcare.[1]

Held in Ramallah, the launch event included opening remarks from Dr. Gerald Rockenschaub, head of WHO office in the occupied Palestinian territory, Mr. James Heenan, head of office for the Office of the High Commissioner of Human Rights (OHCHR) in Palestine, Mr. Jamie McGoldrick, the United Nations (UN) Humanitarian Coordinator for the occupied Palestinian territory, and Dr. Mai Alkaila, the Minister of Health for the State of Palestine.

Opening the launch event on behalf of WHO, Dr. Gerald Rockenschaub stressed that WHO’s 2018 Right to Health report is an important tool for advocacy for the promotion of the right to health in Palestine in the face of chronic occupation and fragmentation, affecting access to healthcare for all Palestinians. Dr. Rockenschaub highlighted the continued attacks on health facilities and workers, including the recent military raid by the Israeli occupying forces on Augusta Victoria hospital in occupied East Jerusalem and the killing of Palestinian health workers, in particular during the Great Return March in Gaza. Discussing the dire fate of Palestinian cancer patients from Gaza, Dr. Rockenschaub highlighted the urgent need to revisit the Israeli permit regime for the referral of patients for treatment, stressing that upholding the right to health under occupation requires principled and collective advocacy efforts.

Speaking on behalf of OHCHR in the occupied Palestinian territory, Mr. James Heenan welcomed WHO’s report for its solid analytical data as a resource for advocacy to strengthen the human rights-based approach to health as a legal right. In particular, Mr. Heenan emphasized that the Israeli occupation remains a clear barrier to the enjoyment of the right to health in the occupied Palestinian territory, stressing the importance of a human rights-based approach based on non-discrimination and the full enjoyment of the rights to freedom of expression and peaceful assembly to claim the right to health.

Mr. Jamie McGoldrick, the UN Humanitarian Coordinator, recalled that 2018 had seen a rise in attacks on health workers, with three paramedics killed during the Great Return March, a large number of killings and injuries during demonstrations in Gaza, including complex injuries, which have overwhelmed the Palestinian health sector, and the impacts of conflict and occupation on the mental health of Palestinians, the full extent of which remains unknown as of yet. Addressing WHO’s new annual report, Mr. McGoldrick underlined the obstacles to enjoyment of the right to health in Palestine, including restrictions on patients and their companions seeking referral outside the Gaza Strip. In particular, he highlighted the effects of Israel’s 12-year closure and de-development of Gaza as an impediment to the full realisation of the right to health, including underlying determinants of health. Accordingly, Mr. McGoldrick called for collective advocacy for the implementation of the recommendations contained in WHO’s 2018 Right to Health report.

The Palestinian Minister of Health, Dr. Mai Alkaila, thanked WHO for their important report. Highlighting the prolonged deprivation of the rights of Palestinians for over seven decades, Dr. Alkaila highlighted Israel’s pervasive violations of the right to health of Palestinians, including as a result of freedom of movement and access restrictions, the closure of Gaza and inability of patients to travel for treatment, the construction of the Annexation Wall and fragmentation of the West Bank, and continued attacks on healthcare, including raids on hospitals and the killing and injury of health workers. In addition, the Minister further addressed the torture and ill-treatment of Palestinian detainees in Israeli prisons and incidents of medical negligence by the Israeli occupying authorities, highlighting the recent torture and ill-treatment of Palestinian detainee Samer Arbeed by Israeli interrogators. As such, Dr. Alkaila stressed that the Israeli occupation impacts all aspects of Palestinians’ lives and called for the implementation of the Human Rights Council resolution on accountability 40/13, in which the Council adopted the recommendations of the UN Commission of Inquiry on the Great Return March.

An affected health worker with the Palestine Red Crescent Society (PRCS) described the challenging environment for paramedics providing healthcare in the occupied Palestinian territory, highlighting the barriers for ambulances to access East Jerusalem hospitals, as a result of the Israeli-imposed permit regime, delays and at times denials of access at checkpoints, which may have life-threatening consequences for Palestinian patients across the West Bank. The affected health worker further described inhumane “back to back” procedures requiring the transfer of patients from one ambulance to another at Israeli checkpoints, in addition to mandatory checks imposed by the Israeli occupying authorities on Palestinian ambulances reaching Israeli hospitals in East Jerusalem, even in life-threatening situations.

Welcoming WHO’s new report on the right to health, Al-Haq’s legal researcher, Rania Muhareb, highlighted the report’s relevance for advocacy with its focus not only on violations of the right to health but also on the detrimental impact of Israel’s prolonged occupation on Palestinians’ enjoyment of the right to the highest attainable standard of physical and mental health, thereby underlining the urgent need to reform Israel’s permit regime, to remove barriers, and “to depoliticize humanitarian health access.” In particular, Al-Haq welcomed the report’s attention to Palestinians’ high exposure to violence under Israeli occupation, including to excessive use force and lethal force by the Israeli occupying forces, which, as the report highlights, “has longer-term implications for physical and mental health, with Palestinian adolescents having one of the highest burdens of mental disorders in the [region].”

Presenting Al-Haq’s documentation of violations of the right to health of Palestinians, Ms. Muhareb highlighted Israel’s disregard for Palestinian life and health under occupation, including the result of torture and ill-treatment in Israeli detention, and the continued use of live fire against Palestinian civilians. In particular, she outlined the failure by the Israeli occupying forces, in most cases, to provide first aid and medical attention to injured Palestinians, but also denials of access for Palestinian ambulances, and increased attacks on health workers, in particular within the context of the Great Return March. She recalled that, according to the findings of the UN Commission of Inquiry on the 2018 protests in the occupied Palestinian territory, all health workers killed in Gaza in 2018 were clearly distinguishable as such and were shot without posing a threat to the lives of Israeli soldiers. Accordingly, Al-Haq recalled the recommendation by the UN Commission of Inquiry for Israel to bring its rules of engagement for the use of live fire in line with international human rights law, stressing that this recommendation must be fulfilled to address Israel’s policy of excessive use of force, in violation of international law.

Examining international legal mechanisms of accountability, Al-Haq’s intervention further outlined the experience of Palestinian civil society and human rights organisations in engaging with the UN Commission of Inquiry and the importance of addressing the root causes of the Great Return March and overall human rights violations committed in the occupied Palestinian territory, noting that the Israeli closure of Gaza for the past 12 years has made Gaza uninhabitable, giving rise to obligations on Israel, as occupying Power, to lift the Gaza closure, as recommended by the Commission of Inquiry, and on third States to cooperate to bring the illegal situation to an end. Accordingly, Al-Haq stressed the urgent need for justice and accountability for widespread and systematic human rights violations, including suspected crimes, committed in Palestine. This, Al-Haq argued, requires an end to Israeli impunity, the opening of an investigation by the International Criminal Court into the situation in Palestine, and immediate follow-up on the implementation of the Commission of Inquiry’s recommendations both by OHCHR, as mandated by Human Rights Council resolution 40/13, and at a system-wide UN level for the promotion and protection of the rights of the Palestinian people, including to the highest attainable standard of health.

Presenting the findings of WHO’s report, Dr. Ben Bouquet explained the conceptual framework of the right to health, focusing on the importance of fulfilling the underlying determinants of health, or those conditions of life conducive to good health and well-being. These conditions include access to secure housing, adequate water and sanitation, food, nutrition, and livelihoods, all of which have a significant impact on health outcomes. Within this framework, Dr. Bouquet highlighted existing health inequities, which are fundamentally unjust, and require duty bearers to implement core minimum obligations to respect, protect, and fulfil the right to health. Within the context of a captive Palestinian economy, Dr. Bouquet highlighted the financial barriers hampering the availability and affordability of healthcare, including the provision of essential medicines and other health deliverables. He also presented on barriers to health access in the Gaza Strip, with the second lowest approval rate for patient travel permits recorded in 2018, and in the West Bank, mostly linked to the fragmentation of the territory, the Annexation Wall and its associated permit regime, hampering freedom of movement of Palestinians. Looking at attacks on healthcare, Dr. Bouquet presented on WHO’s surveillance system for the monitoring of health attacks, stressing the importance of further developing this mechanism. Finally, he outlined the recommendations of WHO’s report, which reiterate recommendations put forward by UN Special Rapporteur on the situation of human rights in the Palestinian territory occupied in 1967, as presented to the UN Human Rights Council in June 2018,[2] and the recommendations of the UN Commission of Inquiry on the Great Return March,[3]which require urgent implementation and follow-up.

For Al-Haq’s previous work on the right to health, see:

[1] See WHO, WHO launches report on the Right to Health 2018, October 2019, available at: http://www.emro.who.int/pse/palestine-news/who-launches-report-on-the-right-to-health-2018-october-2019.html?format=html.

[2] UN Human Rights Council, Report of the Special Rapporteur on the situation of human rights in the Palestinian territories occupied since 1967, 14 June 2018, UN Doc. A/HRC/37/75.

[3] Human Rights Council, Report of the independent international commission of inquiry on the protests in the Occupied Palestinian Territory, 25 February 2019, UN Doc. A/HRC/40/74.