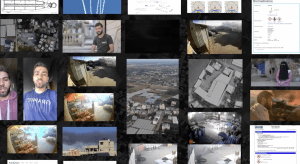 In Collaboration with: Forensic Architecture

Abstract: Marking the launch of Al-Haq’s Forensic Architecture Investigation Unit based in Ramallah and built in collaboration with Forensic Architecture, we examined the circumstances of the 15 May 2021 Israeli bombing of the Khudair Pharmaceuticals and Agricultural Tools Company in Beit Lahiya—the largest agricultural chemical warehouse in Gaza—as part of the environmental disaster imposed on Palestinians in the besieged enclave.

On the evening of 15 May 2021—the 73rd anniversary of al-Nakba and during Israel’s latest military attack on Gaza—the Israeli occupation forces bombed the Khudair Pharmaceuticals and Agricultural Tools Company in Beit Lahiya, the largest agricultural chemical warehouse in Gaza. 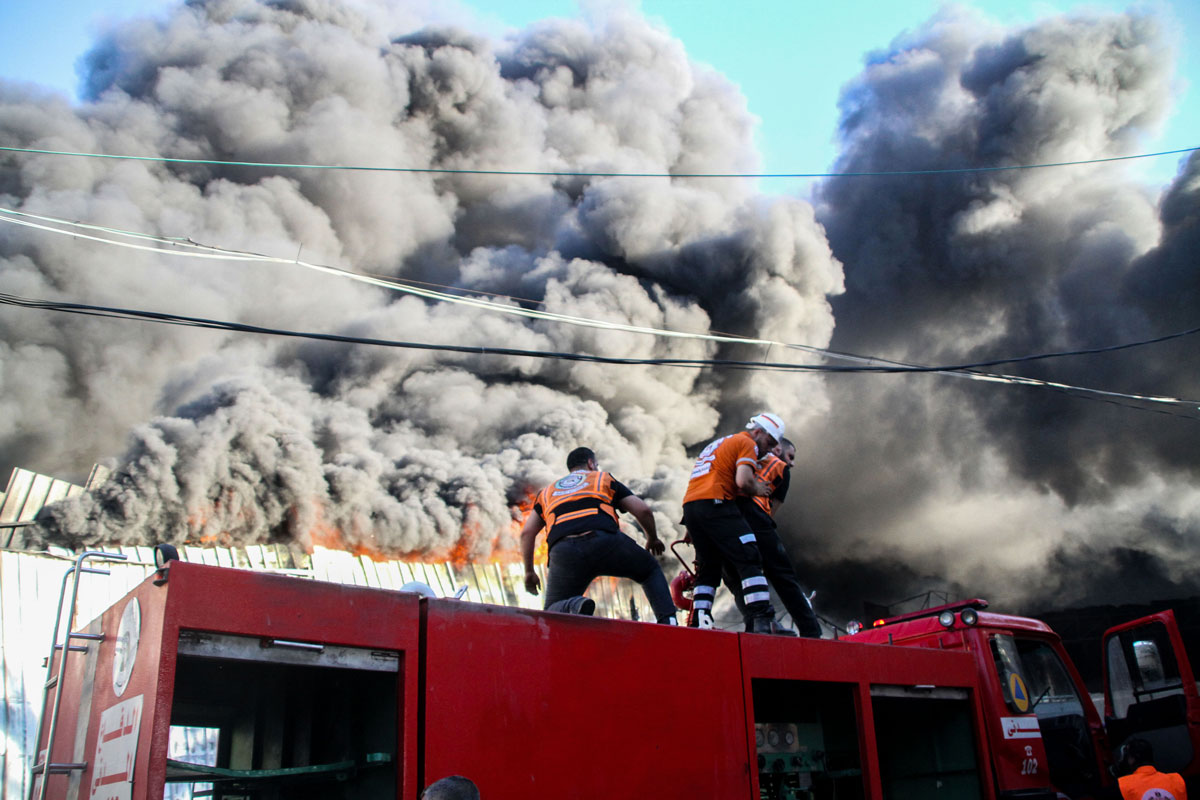 Incendiary artillery shells set fire to hundreds of tons of toxic pesticides, fertilizers, chemicals and other farming materials, initiating a toxic cloud that enveloped large parts of northern Gaza. The Israeli army did not provide a statement about the attack.

Forensic Architecture and Al-Haq’s newly established Forensic Architecture Unit (FAI Unit) worked together with members of the Khudair family and residents of the area to investigate the attack and its toxic consequences as part of the ongoing environmental disaster imposed on Palestinians living in Gaza.

This investigation marks the launch of the FAI Unit. The first of its kind in the Middle East, the FAI Unit ushers in a new generation of visual investigations for the monitoring and documentation of Israeli war crimes and apartheid.

Located in Beit Lahiya, the Khudair Warehouse stores roughly 50% of all vital agricultural chemicals used in the besieged strip.

We gathered original photos, interviews, and drone footage, and analysed dozens of images and videos of the site available online, as well as CCTV footage given to us by the Khudair family, in order to construct a 3D model of the warehouse. 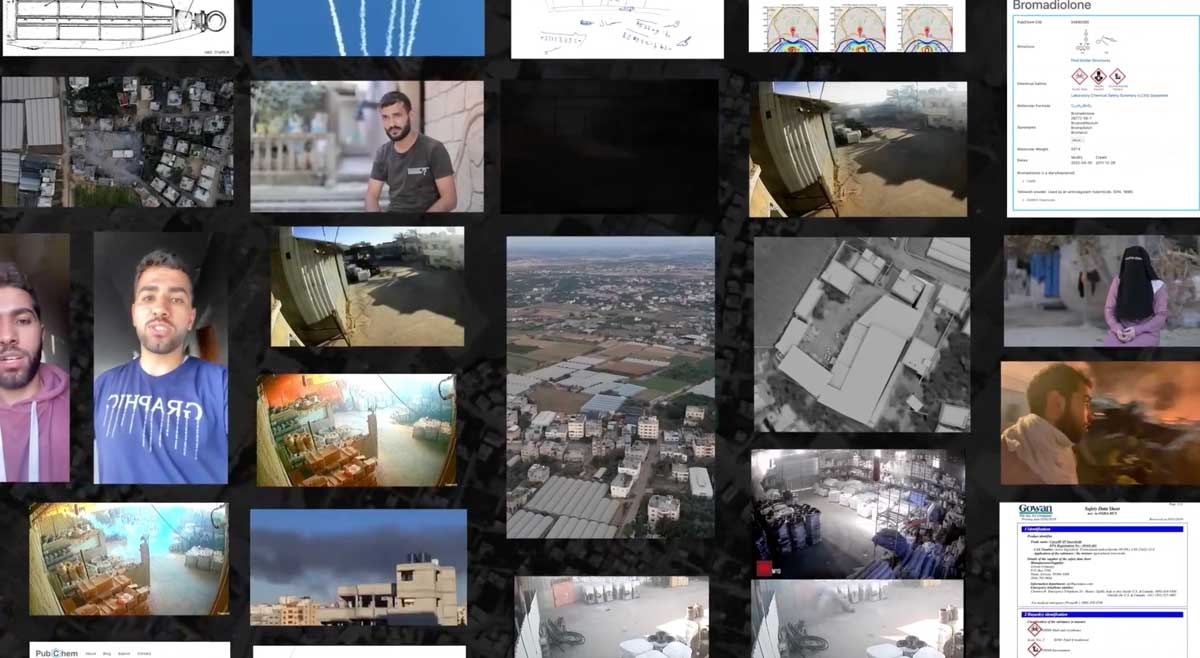 The warehouse is composed of six rooms totaling 2,700 square meters and is surrounded by Palestinian homes and agricultural fields

The precise circumstances of the strike were initially unknown as none of the CCTV videos we sourced contained an accurate timestamp. Seeking time indicators, we conducted shadow analysis to determine the approximate time of attack.

We then synchronized the videos to determine the timing of events, and established the time of the first canister to hit the site at around 5:46pm – likely from the south-east. This was followed by a second canister three seconds later, and at 5:48pm, four other canisters followed. We identified three of these canisters in the interior of the warehouse—landing inside Room 1 and Room 4. By 5:56pm, a plastic stockpile opposite to the south entrance caught fire, and a minute later another fire started inside Room 4. 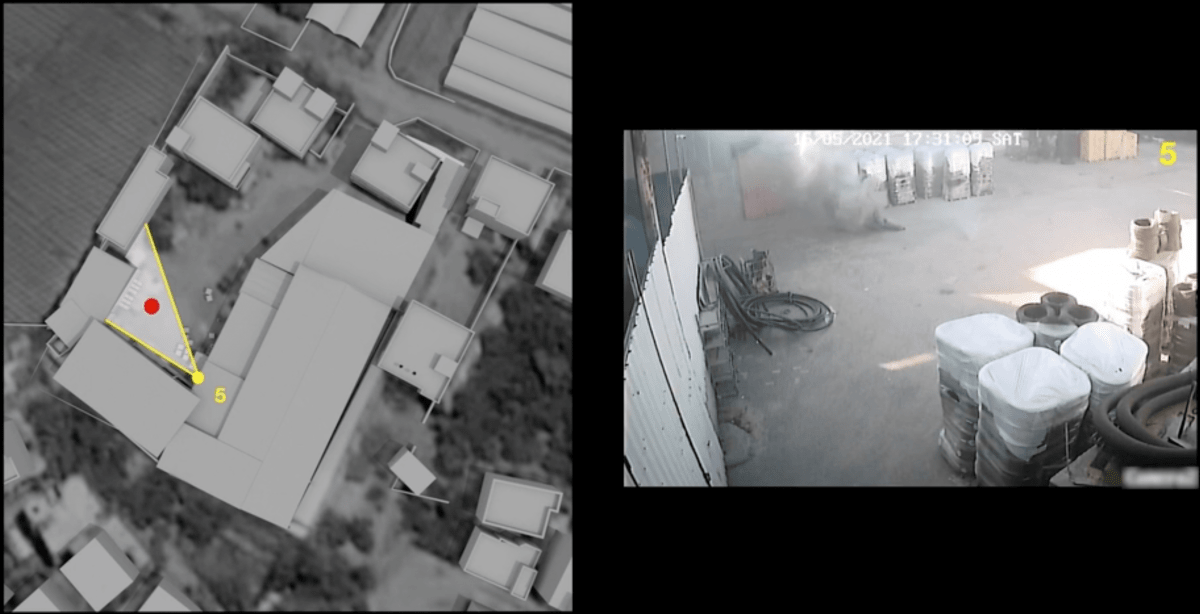 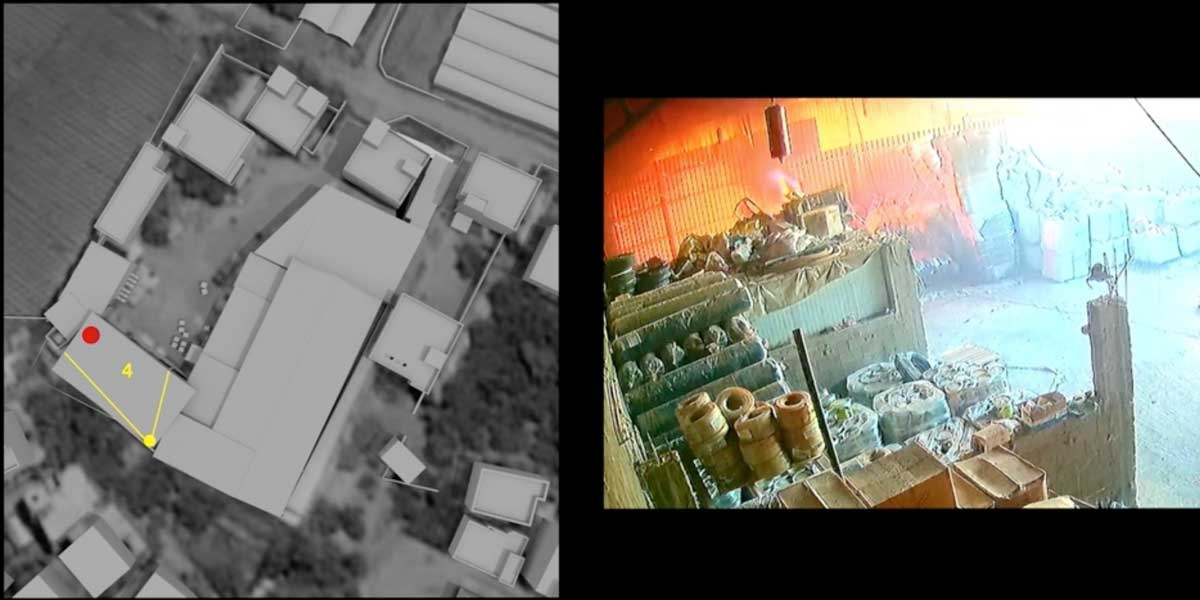 Photos of munition collected from the site by the Palestinian Center for Human Rights show the remains of cylindrical canisters, around 15cm in width. 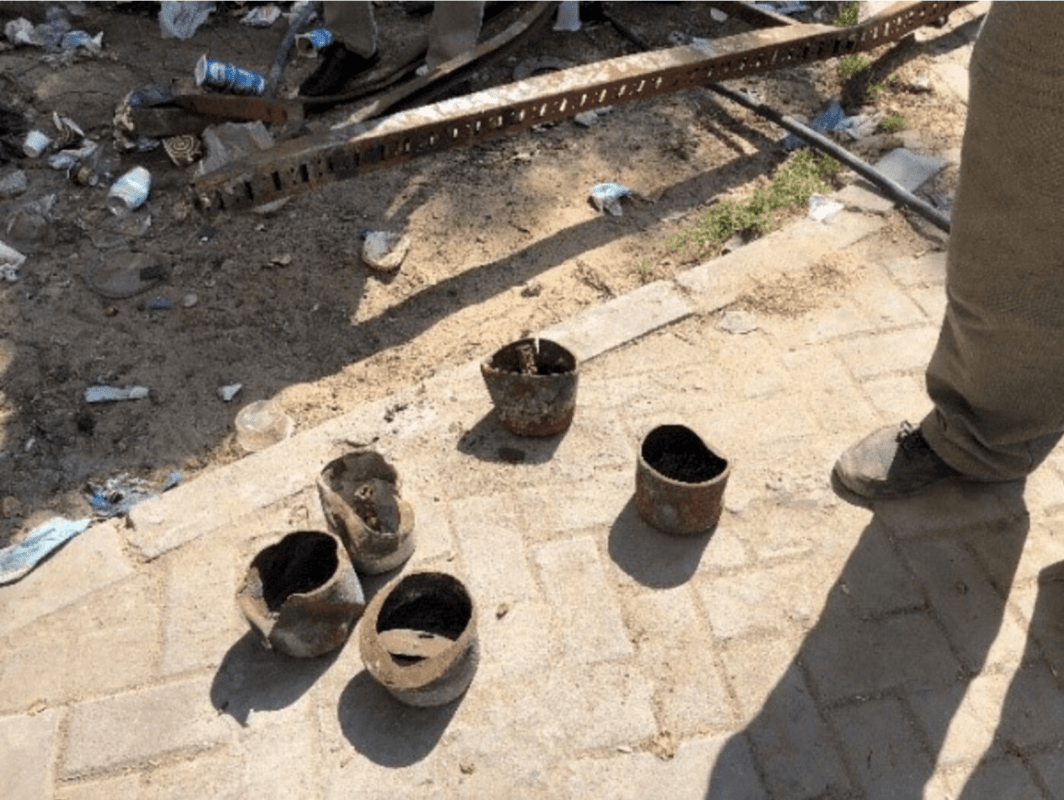 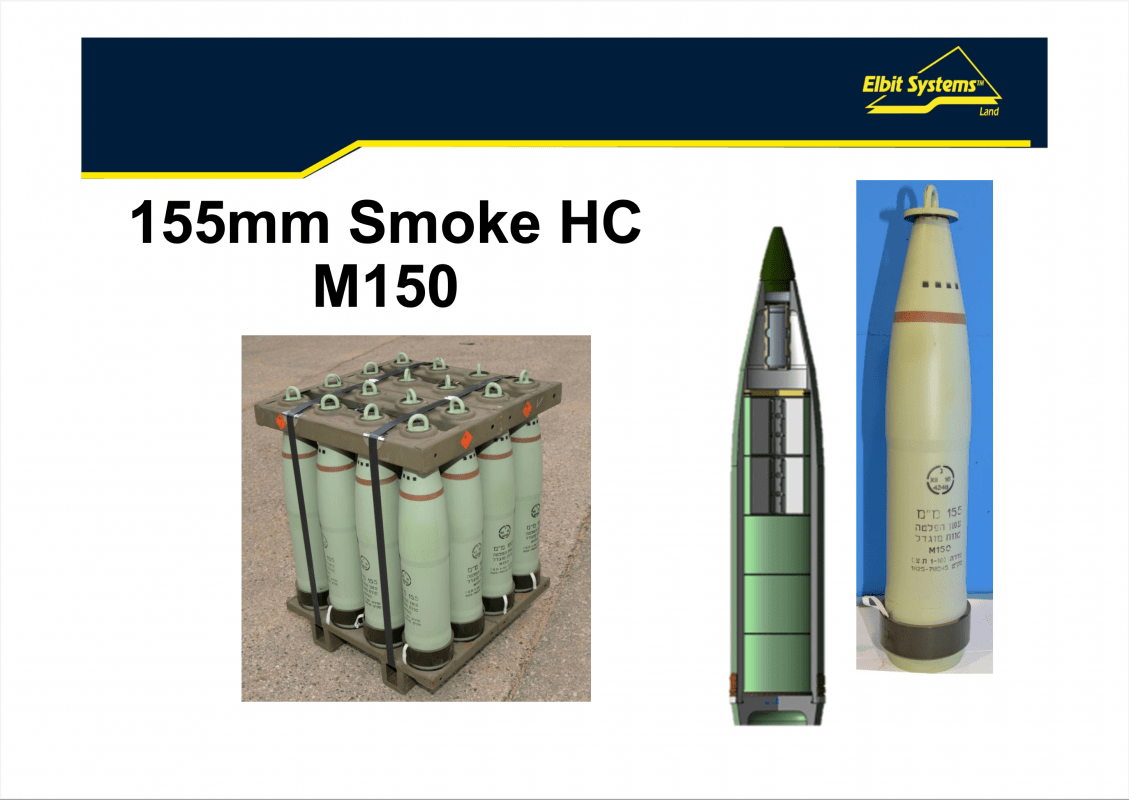 The dimensions and the smoke tail match the M150 Smoke HC 155mm ammunition developed by the Israeli weapons manufacturer Elbit Systems: an ‘advanced smoke projectile’ and a new type of shell designed to splinter into five separate canisters, all of which emit high-density smoke.

Munitions experts explained that M150 artillery is designed to create smoke screens to mask troop movement. But on May 15 there were no reported occupation forces on the ground in Beit Lahiya, and thus:

“There is no military justification for the M150 to be used here. It is inherently inaccurate and unsuitable for use in an urban environment.” - Chris Cobb-Smith

Room 1 contained plastic and nylon sheets, as well as plastic pipes and farming equipment, while Room 2 contained primarily pesticides and fertilisers, including over 18,000 liters of Kontos, a highly toxic and flammable liquid insecticide. Meanwhile, Room 3 contained around forty varieties of chemicals, fertilisers and pesticides, including Ken-Amine Herbicide, Dursban Insecticide, and NPK Fertiliser. 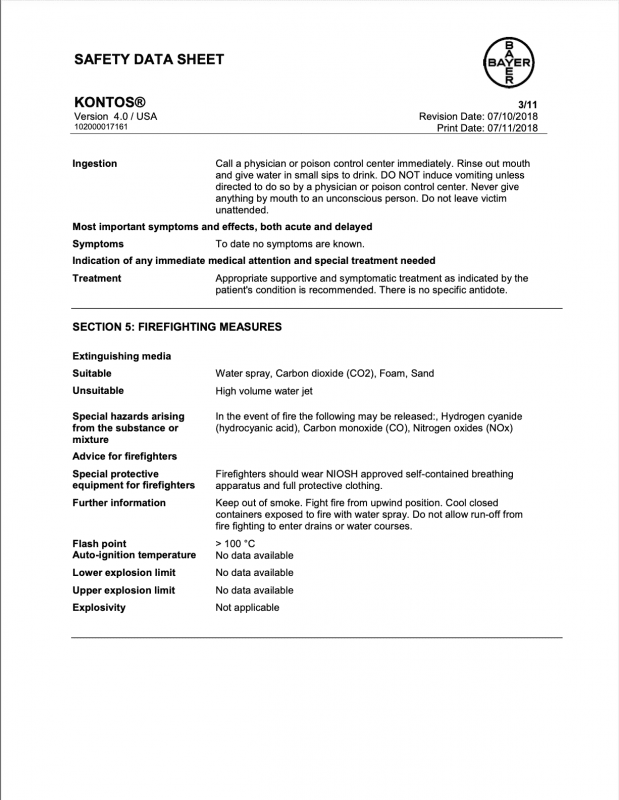 In total, the fire affected over fifty tonnes of hazardous chemicals stored on the site.

Starting on 13 May, and for a full week thereafter, Abdelsalam Abu Halime, who lives nearby, documented the consequences of Israeli occupation forces’ attacks. On 15 May, at 5:52pm, Abu Halime filmed a thick column of black smoke rising from the Khudair warehouse.

To estimate the reach of the plume, we used meteorological data such as wind direction from the day of the attack, and geolocated two frames of Abu Halime’s footage. 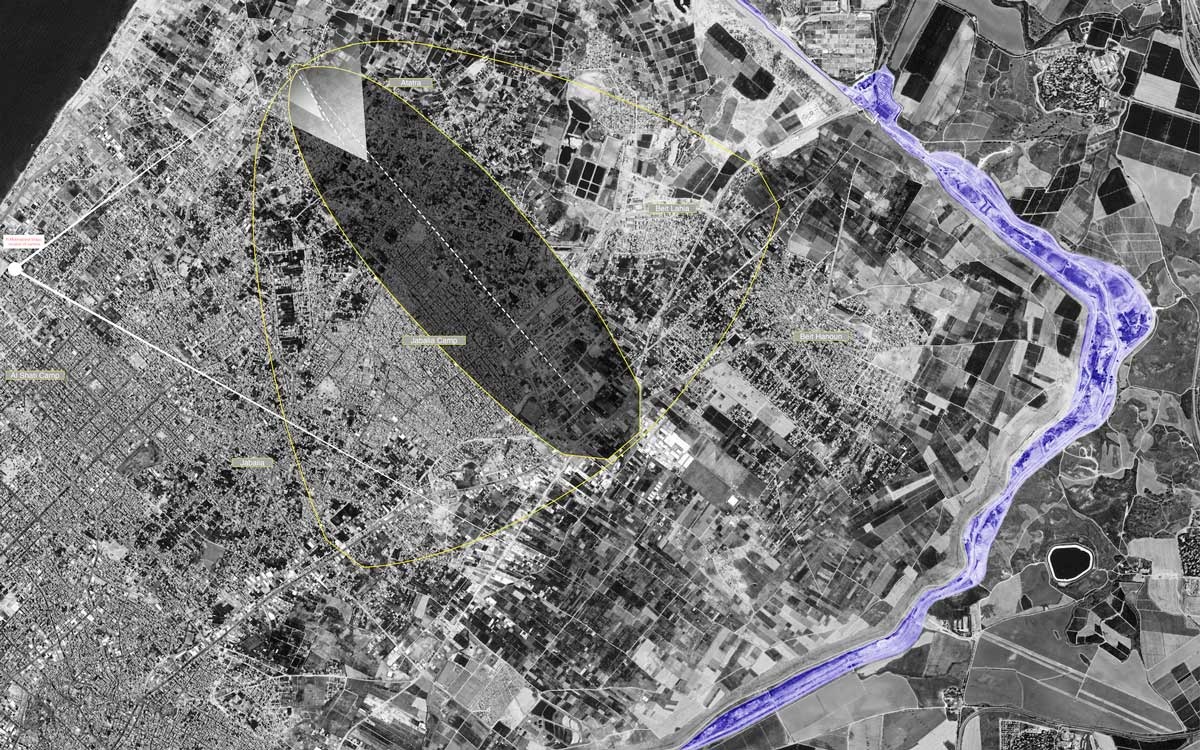 Within the first hour, the toxic plume had affected an area of approximately 5.7 square kilometers— spanning Beit Lahiya and its agricultural zones, as well as the densely populated Jabaliya refugee camp— placing approximately 3,000 homes in its shadow.

The Khudair fire continued for six hours, from 5:50pm until 11:00pm, destroying most of the facility and consuming the majority of its contents.

We consulted fluid dynamics expert, who measured the concentration and spread of the hazardous chemicals stored in the warehouse. He explained that the air concentration of some of the chemicals crossed Acute Emergency Levels—or AEGL. Areas hundreds of metres away from the warehouse had sulfur dioxide and phosphorus pentoxide concentrations of above AEGL-2, indicating a high risk of ‘irreversible damage’ to human health.

He stated that: ‘When exposed to several chemical substances at the same time, as with the fire at this Warehouse, toxic emissions have the potential to amplify each other’s impacts.’

[Clip of Doaa 8:14-8:34 “Because of the intensity of the toxic smell and the smoke, we suffered from stomachache, vomiting and diarrhea. Later I experienced an abnormal pain and, after visiting the doctor, I was informed that I had a miscarriage.”].  Watch the video

This strike was the first in an apparent series of punishing attacks by the Israeli occupation forces, deliberately targeting civilian economic infrastructure and the industrial sector.

On 17 May, two days after the Khudair Warehouse was destroyed, the Fomco Sponge Factory near Jabaliya camp was attacked in a similar manner, causing a large-scale fire. On the same day, over half a dozen other factories and warehouses, located in the industrial zone east of Gaza’s Shejaiyyeh neighborhood, were also bombed. 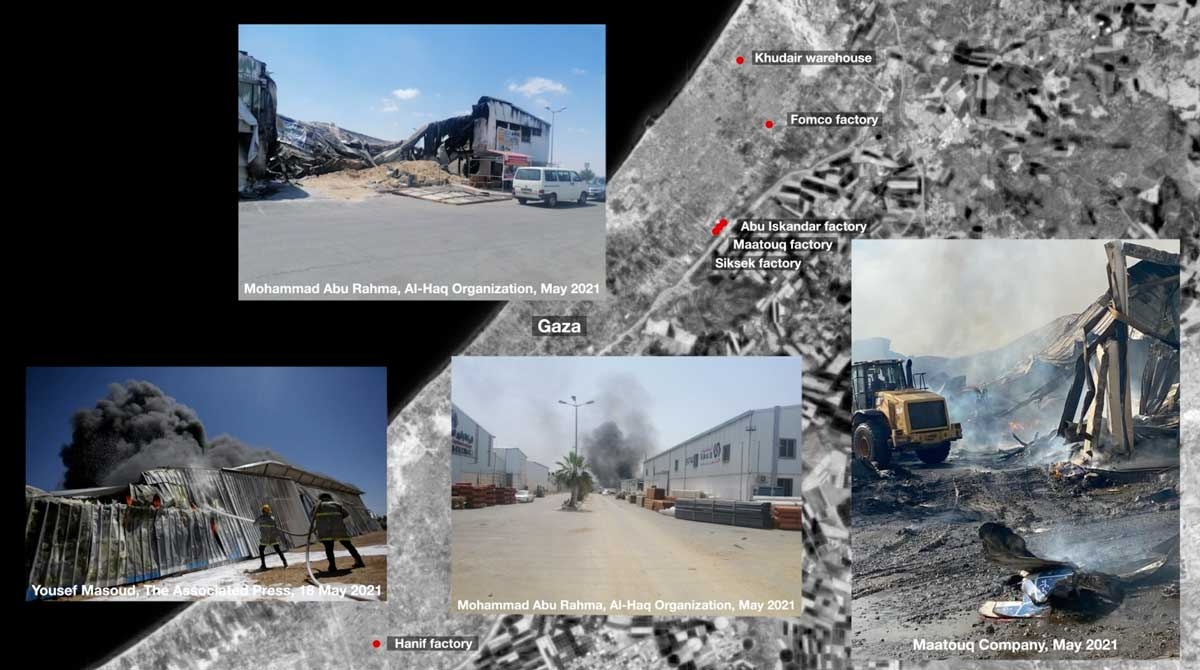 The pattern visible across these strikes suggests that the targeting of the Khudair warehouse was deliberate—this is further supported by the fact an incendiary weapon was used. Each of these bombings exposes Palestinian residents to a range of lethally toxic chemical gases, generating additional long-term health and environmental damage in the besieged strip.

In a legal report based on the findings of this investigation, Al-Haq states that: ‘Israeli occupation forces’ shelling of the Khudair Agrochemical Warehouse, with knowledge of the presence of toxic chemicals stored therein, is tantamount to chemical weapons through indirect means.

Such acts are clearly prohibited… and prosecutable under the Rome Statute of the International Criminal Court.’