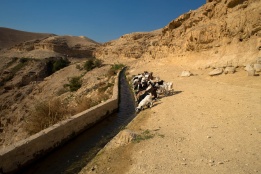 Since the initial observation of the United Nations World Water Day on 22 March 1993, Israel, as the Occupying Power in the Occupied Palestinian Territory (OPT), has continued to consolidate and expand its domination of the Palestinian people through its discriminatory and unlawful policies and practices around the control and distribution of water.

The human right to water encompasses a number of elements, including availability, quality, and accessibility, and includes the ability to both physical access water and the principle of non-discrimination in the distribution of water.[1]

The OPT’s natural water supply comes from three main sources: the Jordan River, the Mountain Aquifer, which stretches from the West Bank across the Green Line, and the Coastal Aquifer, located around the Gaza Strip. Each of these sources are under Israeli military control, and have been the subject of extensive restrictions introduced either by the Israeli occupying forces or Mekorot, the Israeli national water company,[2] into which the Palestinian water system has been integrated.[3]

Palestinian direct access to water in the occupied West Bank is denied in favour of providing access to illegal Israeli settlements. Approximately 50,000 Palestinians residing in Area C of the West Bank are denied access to clean, safe, and affordable water,[4] while as of 2016, Palestinians in the occupied West Bank consumed on average only 73 litres of water per day, well below the World Health Organisation’s (WHO) recommended 100 litres. Conversely, Israeli settlers consumed approximately 369 litres per day, over three times the recommended average.[5] It is estimated that Israeli settlers, illegally residing in the OPT, consume three to eight times more water than the entire Palestinian population of the West Bank, excluding East Jerusalem.[6]

In a 2018 report on the right to health in Palestine, WHO warned that the health system in the OPT is fragmented and fragile and highlighted the precariousness of the situation in the Gaza Strip, where Israel’s illegal closure has led to de-development of the health sector and Palestinian economy, significantly affecting the sustainability of public healthcare provision.[7] In the occupied Gaza Strip, subject to an ongoing 13 year closure and blockade, itself constituting collective punishment of some 2 million Palestinians, only one in ten Gazan households have direct access to clean and safe water.[8] Only five per cent of the water supply in the Gaza Strip is provided by Israel, the Occupying Power, and less than four percent of Gaza’s fresh water supply is fit for human use and consumption.[12]

Israel’s denial to Palestinians of the human right of access to water has been aggravated by COVID-19, with the pandemic presenting a disproportionate and substantial threat to a Palestinian society deliberately denied for decades the right to develop a functioning healthcare system, as a result of apartheid policies and practices imposed by Israel’s occupation.

Palestinian Bedouin communities in the Naqab within the Green Line have been significnatly affected, where 80,000 Palestinian citizens of Israel have no access to emergency medical services and 56,000 residents of villages unrecognised by Israel have no adequate access to safe, clean running water.[9] Palestinian refugees residing in overcrowded refugee camps and Palestinian prisoners and detainees facing overcrowding and unsanitary detention conditions in Israeli prisons are rendered more susceptible to the pandemic and denied access to adequate water and sanitation.[10]

Article 55(1) of the Fourth Geneva Convention establishes Israel’s duty, as Occupying Power, to ensure the food and medical supplies of the civilian population in the OPT to the fullest extent of the means available to it. Article 14(1) of Additional Protocol I to the Geneva Conventions, which is reflective of customary international humanitarian law, provides that the Occupying Power has the duty to ensure that the medical needs of the civilian population in occupied territory continue to be satisfied.

Article 56 of the Fourth Geneva Convention provides that:

‘To the fullest extent of the means available to it, the Occupying Power has the duty of ensuring and maintaining, with the co-operation of national and local authorities, the medical and hospital establishments and services, public health and hygiene in the occupied territory, with particular reference to the adoption and application of the prophylactic and preventive measures necessary to combat the spread of contagious diseases and epidemics. Medical personnel of all categories shall be allowed to carry out their duties.’

That Israel, as Occupying Power, has failed, and is continuing to disregard its obligations under international humanitarian law and human rights law, in the context of the COVID-19 pandemic is borne out not only by the absence of any effort at adopting and applying ‘the prophylactic and preventive measures necessary to combat the spread of contagious diseases and epidemics,’ but by Israel’s discriminatory policies and practices, which actively deny Palestinians access to adequate water and sanitation.[11]

The ongoing pillage by Israel, and with the complicity of corporate actors, of Palestinian water resources in the occupied West Bank is having a disproportionate affect on Bedouin and herder communities and Palestinian farmers. These communities depend fully or partially on water for their survival and livelihoods, and are particularly severely affected by Israeli and corporate pillage of their natural resources including water.

Bedouin communities are most affected by Israeli policies of fragmentation, discriminatory planning and zoning, resulting in demolitions and land confiscations, promotion of ‘relocation’ plans, forced evictions, denial and restrictions on access to essential services and natural resources, including to farming and grazing land and water; restrictions on freedom of movement; lack of enforcement of settler violence and  exposure to military trainings and activity in closed military areas and firing zones, and related temporary displacement, as well as the risk posed by unexploded munitions.[12]

Israeli ‘Water-Apartheid’[13] constitutes a systemic attack on the Palestinian people’s right to water and sanitation as well as a concerted assault on the broader right of Palestinians to the highest attainable standard of health, at a time of unprecedented global crisis.

[7] WHO in the occupied Palestinian territory, Right to Health 2018, pp. 14-16, available at: http://www.emro.who.int/images/stories/palestine/documents/who_right_to_health_2018_web-final.pdf?ua=1

[11] COVID-19 and the Right to Health of Palestinians under Israeli Occupation, Colonisation, and Apartheid (AL-Haq) December 2020: https://www.alhaq.org/publications/17621.html

[13] Al-Haq, Water For One People Only: Discriminatory Access and ‘Water-Apartheid’ in the OPT (2013), available at: http://www.alhaq.org/cached_uploads/download/alhaq_files/publications/Water-For-One-People-Only.pdf; Al-Haq, International Day for the Elimination of Racial Discrimination: Time to Recognise and End Israeli Apartheid over the Palestinian People (21 March 2020), available at: http://www.alhaq.org/advocacy/16614.html.