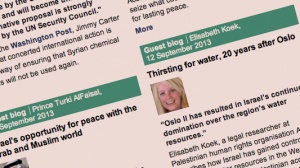 The following op-ed appeared on TheElders.org on 12 September 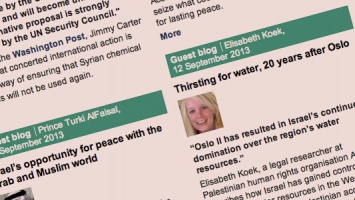 This September marks twenty years since the signing of the Oslo Accords. For Palestinians living in the occupied Palestinian territory (oPt), the struggle for water serves as a constant reminder of the failed promises of that moment.

Palestinians have long suffered from a shortage of clean and safe water. Along with other interim measures, the Oslo Accords promised to temporarily fix the problems of water management and access until a final status agreement between the Israelis and the Palestinians was reached. The Oslo I Accord in 1993 included a provision on Israeli-Palestinian cooperation in the management of water resources. This was followed two years later by Oslo II, which recognised the Palestinians’ right to water and promised them greater access to the region’s water resources.

However, the Oslo Accords did not lead to greater Palestinian access to water, but in fact formalised an existing discriminatory arrangement. Today, this results in a lack of water for Palestinians versus a plentiful supply for those living in Israel and in Israeli settlements, established in contravention of international humanitarian law, throughout the West Bank and East Jerusalem. In fact, the more than half a million Israeli settlers in the West Bank consume approximately six times more water than the Palestinian population of 2.6 million.

A shared resource in a divided land

Water is not, and has never been, scarce in the region. Israel, the West Bank and Gaza Strip have three main sources of natural fresh water. Water does not follow territorial boundaries: the Jordan River and the two major sources of groundwater – the Mountain Aquifer and the Coastal Aquifer – stretch between Israel and Palestine.

Yet Israel has illegally exercised sovereign rights over Palestinian water resources since the end of the Six-Day War in 1967. A series of military orders – still in force and applicable only to Palestinians – integrated the Palestinian water system into the Israeli system. Israeli control increased even further in 1982 with the transfer of Palestinian water infrastructure in the West Bank to Mekorot, Israel’s national water company.

By cementing Israel’s control over the parts of the Mountain Aquifer that lie underneath the West Bank, Oslo II has resulted in Israel’s continued domination over the region’s water resources.

An unequal and unfair arrangement

The Mountain Aquifer between Israel and Palestine is divided into three basins: the Western, the Northeastern and the Eastern. The Western basin is the largest and most productive, yielding more water than the Northeastern and Eastern basins combined. By investigating the patterns of Israeli and Palestinian extraction and use of the basins, it is clear that the outcomes of the Oslo II water management regime have been neither equal nor fair.

One seemingly positive reform that resulted from Oslo II was the establishment of the Joint Water Committee (JWC), an Israeli-Palestinian body that manages all water resources in the West Bank. The committee operates by consensus, meaning that Israelis and Palestinians would have, in theory, equal power to approve and reject each other’s projects. However, the fact that the JWC’s mandate is limited to water resources in the West Bank – and not the downstream Israeli part that flows from it – means that Israel effectively has a veto over Palestinian projects, and not vice versa.

While agreeing to the majority of applications that draw water from the small Eastern Aquifer Basin, Israel has vetoed all applications for Palestinian production wells in the large Western basin. Moreover, approval for major Palestinian water projects is often conditional upon Palestinian agreement to Israeli demands for new and enlarged water supply systems that would benefit Israeli settlements in the West Bank.

The Oslo Accords have provided a veneer of legitimacy for Israel’s second ‘veto’ that hampers the development of the Palestinian water sector. The Accords divided the West Bank into three areas: ‘A’, ‘B’ and ‘C’, each with a varying degree of Palestinian and Israeli control. Israel retains full civil and military control of Area C, which makes up 62 per cent of the West Bank and holds the majority of the natural resources. On top of approval from the JWC, all proposed water structures in Area C must receive permits from Israeli authorities before being built, or face the risk of demolition. These permits are virtually impossible to obtain.

In violation of international law

United Nations resolutions have affirmed that international humanitarian law applies in the oPt. This means that Israel, as the ‘occupying power’, must preserve the sovereign rights of the occupied population and must not exploit and deplete their property – in this case, the Palestinians’ water resources. International human rights law in turn contains specific provisions on access to water. In fact, in 2010, the UN General Assembly recognised the 'right to safe and clean drinking water and sanitation as a human right'. Through its exploitation of the oPt’s water resources and its restrictions on Palestinians’ right to water, Israel contravenes these bodies of law.

International water law regulates the relationship between water-sharing states. According to this body of law, states must share their common water resources according to the principle of ‘equitable and reasonable utilisation’. The Oslo II water regime ignores this principle by safeguarding the quantity of water that Israel was already extracting at the time of the agreement. This meant that a shocking 87 per cent of the Mountain Aquifer was off limits to the Palestinian side before the planning for water infrastructure developments even commenced.

New negotiations must be based on rights

The Palestinian people have been deprived of their sovereign rights over their territory and resources for far too long. In the twenty years since Oslo, not only have Palestinians not realised their national aspirations, but they have seen their potential for economic, social and political development heavily impeded. Israel has implemented policies vis-à-vis the Palestinian territory that undermine the spirit of the Oslo Accords and which are intended to outlast any further negotiations.

The international community must realise that today’s reality post-Oslo provides a sneak peak into the future ‘final status agreement’ that Israel desires. Unless a genuine commitment is made to base this new round of negotiations on the Palestinians’ right to their territory and resources, we are looking at a second agreement that promises much but delivers little.

Elisabeth Koek is a Legal Researcher with Al-Haq and holds an LLM in Public International Law from King’s College London and an LLM in Corporate Law from the University of Leiden.

Views expressed are those of the author and do not necessarily represent those of The Elders or The Elders Foundation.