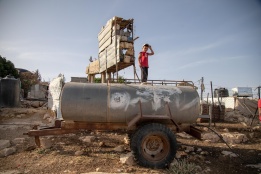 On 22 March every year, World Water Day is designated to measure the world’s progress towards providing everyone with clean, accessible, and affordable water, and reminds us of the challenges faced by hundreds of millions across the world who do not have access to this basic human right. This year, however, those who are denied such access face a unique and added challenge in the form of the novel coronavirus (COVID-19) pandemic. Regrettably, as the World Health Organization (WHO) and Governments across the world advise on increased hygiene, particularly the regular and thorough washing of hands, for many, this everyday preventative action is an impossibility.[1]

The right to water encompasses a number of elements, including availability, quality, and accessibility, referring to both physical accessibility and the principle of non-discrimination in the distribution of water.[2] Despite the right to water being more critical now than any time in recent memory, Israel, the occupying power, continues to restrict access to clean and safe water to millions of Palestinians across the occupied Palestinian territory (oPt), encompassing the West Bank, including East Jerusalem, and the Gaza Strip.

While the oPt suffers from politically-induced water scarcity, the notion that the oPt is water-scarce due to environmental factors is a fictional narrative constructed and imposed by Israel to justify its discriminatory water distribution measures. In fact, the city of Ramallah, located in the occupied West Bank, has more annual rainfall than London.[3] The oPt’s natural water supply comes from three main sources: the Jordan Valley, the Mountain Aquifer, which stretches from the West Bank across the Green Line, and the Coastal Aquifer, located around the Gaza Strip. Nonetheless, all of these sources are under Israeli military control, and have been the subject of extensive restrictions introduced either by the Israeli occupying forces or Mekorot, the Israeli national water company,[4] into which the Palestinian water system has been integrated.[5]

Palestinian direct access to water in the occupied West Bank is denied in favour of providing access to illegal Israeli settlements. Thus, nearly 50,000 Palestinians residing in Area C of the West Bank live without access to clean, safe, and affordable water,[6] and are moreover prevented from building and renovating their own water infrastructure via severe building restrictions imposed by the Israeli Civil Administration, making it difficult to have enough water for both domestic consumption and for maintaining self-sufficiency and food independence.[7] In light of this, as of 2016, Palestinians in the occupied West Bank consumed on average only 73 litres of water per day, well below WHO’s recommended 100 litres, whereas Israeli settlers consumed approximately 369 litres per day, over three times the recommended average.[8] Today, it is estimated that Israeli settlers, illegally residing in the oPt, consume three to eight times more water than the entire Palestinian population of the West Bank, excluding East Jerusalem.[9]

The situation in the Gaza Strip is particularly concerning due to Israel’s prolonged 12-year closure, which amounts to unlawful collective punishment. According to the United Nations Children’s Fund (UNICEF), as of 2019, only one in ten Gazan households had direct access to clean and safe water.[10] Only five per cent of the water supply in the Gaza Strip is provided by Israel, the occupying power, whereas the rest comes from either the Coastal Aquifer, which is largely contaminated, or private wells, which are not affordable for most Palestinians.[11] Moreover, less than four percent of Gaza’s fresh water is fit for human use and consumption.[12] This, along with other factors such as the denial of the right to health by Israel, the occupying power, led the United Nations in 2012 to estimate that the Gaza Strip would become uninhabitable by 2020.[13]

Israel’s prolonged closure of the Gaza Strip and the already existing water and sanitation crisis undermine the ability of Palestinians to adequately prevent and mitigate the impacts of the COVID-19 outbreak, should the pandemic spread across the Gaza Strip. With Gaza’s healthcare system already on the verge of collapse as a result of 12 years of closure, Israel, as occupying power, has further undermined the right to health of Palestinians in the Gaza Strip, including the right to access healthcare. In light of this, Israel’s closure and blockade have rendered Gazans amongst the most vulnerable people in the world to the global COVID-19 pandemic.

At present, the Palestinian Authority has reported 59 COVID-19 cases throughout the oPt, including 57 confirmed cases in the West Bank[14] and two cases in the Gaza Strip.[15] While the virus poses a threat across the world, Israel’s ongoing restrictions imposed on the oPt severely impair the ability of Palestinians to follow important hygiene guidance, critical for slowing the spread of the virus. Under international humanitarian law, namely under Article 56 of the Fourth Geneva Convention, Israel, as occupying power, must maintain healthcare services, public health and hygiene. In particular, Israel must deploy all preventive means available to halt the spread of contagious diseases and pandemics.[16]Under international human rights law, Israel must respect, protect, and fulfil the right of Palestinians to the highest attainable standard of physical and mental health and the right to an adequate standard of living for oneself and one’s family, including adequate water and sanitation.[17]

In this context, Israeli ‘Water-Apartheid’[18] constitutes a systemic attack on the Palestinian people’s right to water and sanitation as well as a concerted assault on the broader right of Palestinians to the highest attainable standard of health, at a time of unprecedented global crisis. Accordingly, Al-Haq calls upon third States, the international community, and private entities to recognise Israeli policies and practices with regards to access to water in the oPt as a gross and systematic denial of the right to health and to water and sanitation, and a contributing factor of the construction, and maintenance, of Israel’s institutionalised regime of systematic racial domination and oppression, amounting to the crime of apartheid, over the Palestinian people as a whole.[19] In line with their obligations erga omnes under international law, we urge all States to take positive measures to bring this unlawful situation to an end.[20]

[12] Oxfam, Failing Gaza: undrinkable water, no access to toilets and little hope on the horizon, available at: https://www.oxfam.org/en/failing-gaza-undrinkable-water-no-access-toilets-and-little-hope-horizon.

[18] Al-Haq, Water For One People Only: Discriminatory Access and ‘Water-Apartheid’ in the OPT (2013), available at: http://www.alhaq.org/cached_uploads/download/alhaq_files/publications/Water-For-One-People-Only.pdf; Al-Haq, International Day for the Elimination of Racial Discrimination: Time to Recognise and End Israeli Apartheid over the Palestinian People (21 March 2020), available at: http://www.alhaq.org/advocacy/16614.html.

[19] On this, see Al-Haq, Palestinian, regional, and international groups submit report on Israeli apartheid to UN Committee on the Elimination of Racial Discrimination (12 November 2019), available at: http://www.alhaq.org/advocacy/16183.html.