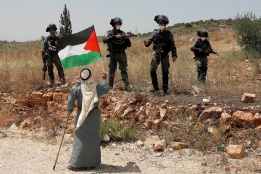 This week marks 55 years since the start of Israel’s occupation of the Palestinian territory (i.e., the West Bank, including East Jerusalem and the Gaza Strip), a belligerent occupation which has been carried out in the context of, and serves to entrench, Israel’s settler colonisation and apartheid of Palestine. An occupation, which former UN Special Rapporteur for the OPT has condemned as illegal.[1]

Despite countless condemnations of the prohibited acquisition of this territory by force,[2] Israel has taken advantage of an internationally permissive climate of impunity, increasing its domination over the Palestinian people under its military control. Israel’s development of an illegal settlement enterprise for the sole benefit of Israeli Jews, the construction of a far-reaching separation Wall which even oversteps the Green Line,[3] and its unilateral military closure and blockade of the Gaza strip are all measures that met little or no actual opposition from the international community. This makes international organisation and third states complicit in some of the most serious international crimes, namely war crimes and crimes against humanity.

This passivity is all the more striking today in light Russia’s military offensive and occupation of Ukraine. The international outpouring of support and concrete actions to support Ukraine makes crystal clear the appalling double standard that the Palestinian people have been facing, not only since 1967, but since the Nakba in 1948. This double standard is such that “the significance of international law to the conflict has long been the subject of much cynicism amongst Palestinians, given the politicized nature of the UN Security Council” and the lack of support from the liberal European and western states.[4]

This June will also mark 15 years since Israel unilaterally decided to close the Gaza Strip in violation of international humanitarian law, preventing any movement by air, sea, and by land. In addition, Israel unilaterally decreased the Palestine’s agreed maritime space from 20 nautical miles to 6 nautical miles.[5] Through the closure of the Gaza Strip, Israel has facilitated, “its decades-long policy of de-development” thereof, conducted through the limitation of electricity supply at approximately five hours of electricity per day, the destruction of Gaza’s agriculture, and attacks against fishermen and their livelihoods. The Israeli Occupying Forces have targeted Gaza’s wastewater treatment plants in successive military offensives on the Gaza Strip, damaging sanitation infrastructure and leaving Gaza with very little consumable water. Yet, Israel pursues its illegal exploitation of natural resources present in the Gaza Strip, which is an essential consideration explaining the closure thereof.[6]

Both the closure of the Gaza Strip and the four wars waged by Israel have destroyed Gaza’s economy. During the May 2021 military offensive, Israel’s airstrikes targeted and destroyed Gaza’s largest warehouse providing agricultural supplies, the Khudair By targeting the warehouse, the IOF “acting with knowledge, created a chemical weapon via the destruction of agrochemical products. This produced a chemical cloud and leaked toxic material into the soil”.[8] The attack caused adverse effects on the civilian population, including ”pain in the abdomen”, ”shortness of breath”, and  “strong itching in the skin”.[9] The fact that Israel was fully aware that toxic chemicals were stored inside the warehouse makes the attack a prohibited ”indirect use of a chemical weapon” under customary international law.[10] This further amounts to acts targeting objects indispensable for the survival of the civilian population, prosecutable as war crimes under Article 8(2)(b)(xxv) under the Rome Statute of the ICC (the Rome Statute).

Although the international community has recognised the situation in the Gaza Strip as uninhabitable, it has yet to take concrete measures to end the closure and occupation, and dismantle the apartheid regime. Critically, the closure of the Gaza Strip constitutes collective punishment prohibited under the Fourth Geneva Convention,[11] and thus entails the obligation of Third States to act in order to ensure respect for IHL.[12]

In the West Bank, including eastern Jerusalem, the fragmentation of the territory is manifested through the Annexation Wall along with a network of  “military watchtowers, checkpoints and surveillance systems that operate alongside the permit system”, cutting ”sections of the Palestinian community into enclaves” which ”further enables settler-colonial expansion into the West Bank.”[13] The International Court of Justice (ICJ) has previously warned that through the Annexation Wall and its associated regime the situation on the ground may well become de facto annexed.[14]

Israel has escalated its settlement enterprise, through house demolitions and forcible transfers. Today, some 700,000 illegally transferred in Israeli Jewish settlers live in 300 settlements in the West Bank. In 2021, Al-Haq documented the killing of 324 Palestinians, including 84 by the IOF outside of active hostilities. Further, Al-Haq documented the destruction of 367 Palestinian privately-owned structures in the West Bank. In 2022, Al-Haq documented 59 killings as of 1 June, and 62 administrative house demolitions, in addition to demolitions of 46 other structures as of 31 May. In March-April 2022, in a massive crackdown on the Palestinian territory, Israel significantly increased its recourse to excessive force.[15]

Another noticeable pattern we would like to highlight is the State-sponsored and rising violence emanating from the Israeli-Jewish settlers. This violence is part of the settlement enterprise and directly related to the Zionist project aimed at manipulating the demography in the OPT to ultimately erase the Palestinian presence from the West Bank, including eastern Jerusalem. Palestinians living near Israeli settlements live with the constant fear of being subject to, inter alia, killings, beating and vandalization of the properties, committed with the green light of the Israeli authorities and sometimes active support of Israeli forces. This climate of impunity enjoyed by Israeli Jewish settlers resulted in the killing of eight Palestinians by settlers in the last three years, including four in 2021 and two in 2022.[16]

Alongside Israel’s apartheid regime and the settlers, corporations have played a crucial role in the settlement enterprise. Regardless of the UN Guiding Principles on Business and Human Rights and the prohibition of pillage[17], they have prolonged the lucrative occupation of the OPT by exploiting Palestinian natural resources. In conflict-affected areas, companies must “practice enhanced due diligence in understanding their impact on and ensuring compliance with human rights”.[18] In order to pave the way for corporates accountability, Al-Haq calling for the annual update of the UN Database on Businesses active in the Settlements established pursuant to UN Human Rights Council resolution 31/36.[19]

55 Years of Inaction: Time for Sanctions

As rightly noticed by the members of the UN Security Council in the landmark resolution 2334, the “Status quo is not sustainable and… significant steps … are urgently needed in order to (i) stabilize the situation and to reverse negative trends on the ground, which are steadily eroding the two-State solution and entrenching a one-State reality, and (ii) to create the conditions … for advancing the two-State solution… on the ground.” According to the Security Council, the illegal settlements established in the OPT, including East Jerusalem, constitute a “major obstacle to the achievement of the two-State solution and a just, lasting and comprehensive peace”.[20]

More than five years after the adoption of this resolution, these ”negative trends on the ground” have been further entrenched, to the point that Israel’s discriminatory and oppressive policies and practices are on the verge to impose” facts on the ground … which have the potential to become irreversible”.[21]

Never in human history has the international community abandoned for such a long time a people facing a racist and oppressive and brutal regime to its own fate. It is time for the international community to prioritise the protection of the values and principles promoted in the UN Charter, such as the peaceful settlement of disputes, the prohibition of the use of force,[22] over the realpolitik and double standard Palestinians have been subjected to for far too long.

Israel, as Occupying Power, must:

1. End its occupation of the OPT and apartheid regime over the Palestinian people as a whole;

2. Immediately and urgently end its unlawful closure and blockade of the Gaza Strip, amounting to collective punishment, and refrain from impeding access to and movement from the Gaza Strip;

3. Dismantle the illegal Annexation Wall and its associated regime, pursuant to the 2004 Advisory Opinion of the ICJ on the Wall;

4. Dismantle all Israeli settlements in the OPT, including East Jerusalem, and immediately stop the advancement of its settlement enterprise through further construction and expansion in the OPT;

1. Recognise the applicable legal frameworks as apartheid and settler colonialism, and belligerent occupation;

2. Comply with their legal obligations not to recognise as lawful any alteration imposed by Israel in the OPT, including the construction of an Annexation Wall beyond the Green Line and the annexation of Jerusalem;

3. Abide by their obligations as third States not to render aid or assistance in maintaining Israel’s occupation, apartheid and settler colonisation, and impose sanctions on the corporate entities domiciled in their territories and any other company profiting from Israel’s exploitation of Palestinian natural resources and occupation at large.[23]

4. Bring perpetrators of grave breaches of the 1949 Geneva Conventions, including corporate entities, before their own courts consistent with their obligations as State parties to the Fourth Geneva Convention under Article 146 and;

5. Support the investigation of the Office of the Prosecutor of the ICC.

The international community, through the UN, must:

1. Impose sanctions and urgently take action to ensure that Israel’s unlawful 15-year closure and blockade are completely and immediately lifted and Israel’s 55 years occupation of the Palestinian territory is brought to an end, and apartheid regime dismantled;

2. Ensure Israel ceases all settlement activities in the OPT, including East Jerusalem, in line with UNSC resolution 2334;

3. Call for a meeting of the High Contracting Parties to the Fourth Geneva Convention of 1949 on steps towards decolonisation and ending apartheid;

4. Call on the Office of the High Commissioner for Human Rights to annually and comprehensively update the UN database on companies operating in the OPT as required under paragraph 17 of UN Human Rights Council resolution 31/36.

[3] Also known as the 1949 Armistice Line, the Green Line is the de facto internationally recognised border formed in 1949 between Israel and what was left of historic Palestine.

[4] Michael Kearney, “Lawfare, Legitimacy and Resistance : the Weak and the Law”, 2010, p.2, available at https://www.academia.edu/30831448/Lawfare_Legitimacy_and_Resistance_The_Weak_and_the_Law?auto=download&email_work_card=download-paper

[14] ICJ, “Legal Consequences of the Construction of a Wall in the Occupied Palestinian Territories” (hereinafter ‘the wall’), Advisory Opinion, 9 July 2004, paras 142-153

[16] Figures on file with Al-Haq Monitoring and Documentation Department. Five Palestinians killed by settlers between 1 January 2019 and 1 June 2022.

[17] Articles 28 and 47, The Hague Regulations Respecting the Laws and Customs of War on Land annexed to the Fourth Hague Convention of 18 October 1907.

[19] UN High Commissioner for Human Rights, ”Database of all business enterprises involved in the activities detailed in paragraph 96 of the report of the Independent International Fact-Finding Mission to Investigate the Implications of the Israeli Settlements on the Civil, Political, Economic, Social and Cultural Rights of the Palestinian People throughout the Occupied Palestinian Territory, including East Jerusalem” (hereinafter « UN Database on companies operating in the OPT »)   (2018), available at https://digitallibrary.un.org/record/1475002?ln=en.

[23]  The UN database on companies operating in the OPT, publicly released in 2020, listed 112 corporations conducted such illegal activities.