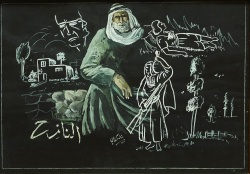 Seventy-two years have passed since the Palestinian people were forcibly expelled from their homes, lands, and property in Palestine during the Nakba or ‘catastrophe’ which started in 1948. Palestinian society was decimated during the Nakba, 531 Palestinian villages were destroyed, while Zionist militias carried out more than 70 massacres in which more than 15 thousand Palestinians were killed between 1947 and 1949.[i] Some two-thirds of the Palestinian people became refugees in and around 1948 and a quarter of those who remained were internally displaced following the war, denied their right of return to their villages, towns, and cities of origin ever since. Yet, the Nakba’s colonial legacy lives on.[ii] At 72, the Nakba is far from a distant memory for the Palestinian people: it is an ongoing reality of Israeli settler-colonialism, population transfer, apartheid, and dispossession, policies which have never ended and continue to be entrenched today.[iii]

In the immediate aftermath of the Nakba, Israel adopted a series of laws, policies, and practices, which sealed the dispossession of the indigenous Palestinian people, systematically denying the return of Palestinian refugees and other Palestinians who were abroad at the time of the war, while escalating Palestinian dispossession and imposing a system of institutionalised racial discrimination over Palestinians who remained in the land, many of whom had been internally displaced. The 1950 Absentee Property Law became the main legal instrument of dispossession and was used by Israel to confiscate the property of Palestinian refugees and displaced persons, who were deemed ‘absentees’ despite the State denying their return. Seventy years after its adoption, the Absentee Property Law continues to be used to advance the Judaisation of the city of Jerusalem and to alter its Palestinian character, demographic composition, and identity.[iv]

In turn, the 1950 Law of Return and the 1952 Citizenship Law cemented Israel’s institutionalised racial discrimination in law. Establishing domination, both in law and in practice, Israel granted every Jew the exclusive right to enter the State as an immigrant and to obtain citizenship, while Palestinian refugees have been categorically denied their right of return, to the homes, lands, and property from which they were illegally dispossessed, as mandated by international law. These Israeli laws form the legal foundation of Israel’s settler-colonialism and apartheid regime of systematic racial domination and oppression over all Palestinians on both sides of the Green Line and as refugees and exiles abroad. Seven decades since, Israel continues to impose its apartheid regime by entrenching the erasure and dispossession of the indigenous Palestinian people, while ruthlessly fragmenting, segregating, and isolating Palestinians legally, politically, and geographically in order to ensure Israeli-Jewish domination.[v]

As we mark 72 years since the Nakba, the Israeli government’s plan to move forward with de jure annexation of parts of the West Bank will become another strategic milestone in Israel’s settler-colonial project in historic Palestine, consisting of continued land grab, pillage, and displacement of Palestinians through the maintenance of Israel’s apartheid regime. As recently warned by Professor Michael Lynk, the United Nations (UN) Special Rapporteur on the situation of human rights in the Palestinian territory occupied since 1967, Israel’s annexation plans “would crystalize a 21st century apartheid, leaving in its wake the demise of the Palestinians’ right to self-determination. Legally, morally, politically, this is entirely unacceptable.”[vi]

The crimes of the Nakba, including the expulsion of Palestinian refugees, extensive destruction of Palestinian property, mass killing, and the prolonged denial of Palestinian refugee return, have never been prosecuted or remedied. Just two years ago, the Israeli occupying forces carried out the mass killing of some 60 unarmed Palestinian protesters in the Gaza Strip at the eve of the 70th Nakba commemoration.[vii] It is the injustices of the Nakba and the ongoing denial of the right of return that led to the Great Return March demonstrations over nearly two years in Gaza and it is the continued failure to ensure justice and accountability that has given Israel a greenlight to kill with impunity. The international community has consistently failed to hold Israel to account, despite clear tools at its disposal to put an end to this injustice.

Today, States must guarantee international justice and accountability by supporting a full and thorough investigation by the International Criminal Court (ICC) into the Situation in Palestine.[viii] The Court is competent to investigate the crimes of population transfer, extensive destruction of property, apartheid, and has a responsibility to deliver justice to Palestinian victims. At this critical juncture in the Palestinian struggle for self-determination, which includes the right of return, support is also needed for the UN Relief and Works Agency for Palestine Refugees in the Near East (UNWRA) until a durable solution to the Palestinian refugee question, based on the realisation of the Palestinian people’s inalienable rights under international law, is achieved.

Seventy-two years on, the Nakba has come to symbolise the ongoing oppression of the Palestinian people through Israel’s racist colonial rule, implemented through an apartheid regime over all Palestinians, which continues to be entrenched. On Nakba Day, we call on civil society organisations and state representatives from around the world to take effective legal and political measures to eradicate colonialism, to bring perpetrators of suspected war crimes and crimes against humanity to justice at the ICC, and to publicly recognise and collectively overcome Israel’s apartheid regime imposed over the Palestinian people as a whole.

See how the Nakba has transformed Palestine since 1948 with this map by Visualizing Palestine marking the Nakba at 72: https://today.visualizingpalestine.org/?blm_aid=8507392.

[i] PCBS, “Dr. Ola Awad, reviews the conditions of the Palestinian people via statistical figures and findings, on the 72nd Annual Commemoration of the Palestinian Nakba”, available at: http://www.pcbs.gov.ps/site/512/default.aspx?lang=en&ItemID=3734.