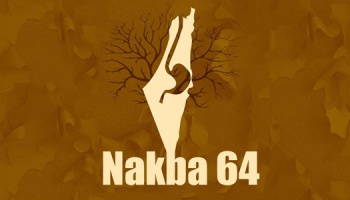 Sixty-four years have passed since Palestinian society was decimated by the forcible transfer of some 700,000 people by Israeli forces. Each year, on 15 May, ‘Nakba Day’ commemorates the anguish of those who were expelled from their homes and those who fled in panic under direct military assault. Today also serves as a day of remembrance for the mass murders of 1948 and the destruction of entire villages, of Deir Yassin and Tantura and Al-Dawayima, when hundreds of Palestinians were killed during a period that is now known simply as ‘the catastrophe’.

While the term Nakba is seen as a reference to the murder, exile and devastation of the 1948 war, in reality, it could just as easily be used to describe the current belligerent occupation. It is an appropriate term for nearly six decades of demolitions, internment, the appropriation of land and the refusal by Israel to recognise and respect the basic human rights of the Palestinian people. It could very easily be used to describe the denial of the right to self-determination of the Palestinian people. The Nakba did not end in 1948. The mass forcible transfer that occurred during and in the aftermath of the war was only the first stage in Isreal’s illegal policy of displacement that is being implemented with equal determination and precision to this day.

For the last six decades, the rights of those dispossessed have never been addressed. Today, seven million Palestinian refugees are scattered across the globe. The right of the Palestinians displaced by the wars in 1948 and 1967 has been framed by Israeli rhetoric as a political claim and continuously rejected. In truth, the right to return of those displaced by a conflict is a well-established principle of international law. In particular, the right of Palestinian refugees has been unequivocally reiterated by the Security Council in its unanimously adopted Resolution 237 of 1967.

Indeed, the most recent bout of negotiations came about in response to a request from the Quartet for proposals on borders and security arrangements in a future two-State solution. However, this seems to ignore the fact that the conflict is not simply one of borders, but revolves around a multitude of interrelated issues, including the rights of refugees, Jerusalem, water, and prisoners, which need to be addressed in an equitable manner to bring about a just and durable solution to the conflict. By resolving the issues that Israel wants negotiated first, Palestinian representatives will be stripped of any leverage they have to negotiate other important questions, resulting in an illusory peace process and continued occupation.

Furthermore, Israel has repeatedly demanded that Palestinian representatives come to the negotiating table without preconditions. It should be clear to all involved that international law cannot be dismissed as a simple precondition. Rather, it is the foundation upon which constructive and well-balanced negotiations must be based and as such it must be upheld and respected by all parties involved.

As such, denial of the right to self-determination, which encompasses the right to return, has become a legacy, passed down by Palestinian parents to their children. Palestinians in 2012 still experience ‘the catastrophe’, albeit in a slightly different format. The term is today a reference to the silent annexation of the Jordan Valley and the forcible transfer of families across Area C of the West Bank. It describes the effects of the Annexation Wall, the illegal blockade of the Gaza Strip and the violent suppression of freedom of expression. It is also a fitting portrayal of a situation where some 2,500 Palestinian prisoners must go on hunger strike, several to the point of near-death, to demand the most basic human rights.

For Palestinians, the Nakba has been perpetuated for decades. It will continue for decades more, for as long as justice is sidelined and Israel is granted impunity by the international community for an uninterrupted stream of violations of international law that began more than sixty years ago.