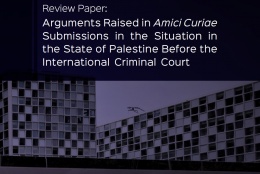 In particular, the review paper, analyses the amici curiae briefs submitted by Australia, Austria, Brazil, Czech Republic, Germany, Hungary, and Uganda, as well as a number of academics and organisations, arguing that the Court does not have jurisdiction over the Occupied Palestinian Territory (OPT). These amici contend that the State of Palestine does not constitute a State under international law, is not a valid State Party to the Rome Statute of the International Criminal Court, and ultimately that the ICC cannot exercise territorial jurisdiction over the West Bank, including East Jerusalem, and the Gaza Strip.

This report follows an amicus submission made by Al-Haq, PCHR, Al Mezan, and Al-Dameer to the Court, arguing that Palestine does constitute a State, has validly acceded to the Rome Statute, and may confer the ICC with full jurisdiction over both Israelis and Palestinians within the OPT.[1] Our organisations, having analysed legal objections to this position, ultimately find such analyses unpersuasive, and conclude that the Pre-Trial Chamber of the ICC may not prevent the Prosecutor from conducting a full, free, and detailed investigation into international crimes, including war crimes and crimes against humanity, committed in the OPT.

The Palestinian organisations have previously engaged with the ICC, and in particular the Office of the Prosecutor, in bringing about an investigation. To date the Palestinian organisations have submitted seven substantial communications along with thousands of files of photographic and other evidence recorded through Eyewitness. On 27 September 2017, a 700-page communication was submitted to the Prosecutor providing evidence and details of an extensive and systematic campaign of war crimes and crimes against humanity committed by Israel in the OPT.[2] Similarly, in October 2018, a 500-page file on the crime of pillage, and the appropriation and destruction of Palestinian natural resources was submitted to the Office.[3]

On 29 April 2020, the review paper “Response to Arguments Raised in Amici Curiae Submissions in the Situation in the State of Palestine Before the International Criminal Court” was submitted to the Office of the Prosecutor of the ICC, to provide additional guidance on the territorial jurisdiction of the Court and move the Situation in Palestine towards a criminal investigation. Our organisations seek to ultimately end Israeli impunity for war crimes and crimes against humanity carried out in the OPT and bring justice and accountability to Palestine.

[1] Al-Haq, Palestinian Human Rights Organisations Submit Amicus on Territorial Jurisdiction of the state of Palestine, to the Pre Trial Chamber of the International Criminal Court (19 March 2020), available at: http://www.alhaq.org/advocacy/16609.html.