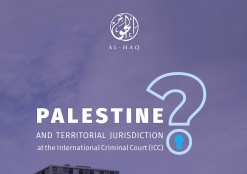 On 28 April 2020, Al-Haq published its Q&A, titled Palestine and Territorial Jurisdiction at the International Criminal Court, an accessible but comprehensive introduction to the ‘Situation in the State of Palestine’ before the International Criminal Court (ICC). The report provides an overview into the process currently taking place at the Pre Trial Chamber at the ICC, as the Prosecutor, States, victims lawyers, human rights organisations, academics, and others, provide arguments pertaining to the Courts territorial jurisdiction over the Occupied Palestinian Territory, encompassing the West Bank, including East Jerusalem, and the Gaza Strip.

Al-Haq, along with its partners the Palestinian Centre for Human Rights (PCHR), Al Mezan, and Al-Dameer, have submitted detailed legal observations to the Court arguing that the Prosecutor has the full legal authority to open a criminal investigation into war crimes and crimes against humanity committed in Palestine.[1] In the face of increasingly aggressive threats of annexation from the State of Israel,[2] it is now more important than ever for the ICC to take positive action to end the culture of impunity which has facilitated the widespread and systematic commission of war crimes and crimes against humanity by Israel and its military.

International crimes have been commonplace in Palestine since 1948, and have continued throughout the military occupation which started in 1967. Forced displacement, the excessive and deadly use of force, the construction and maintenance of the Annexation Wall and illegal Israeli settlements, the killing of civilians and protestors as part of 2014’s Operation Protective Edge and the Great Return March in Gaza, all represent crimes which the Court may investigate and punish. To date, no actions have been taken by the State of Israel to investigate such crimes, or to bring individual perpetrators to justice; thus, the ICC is the final avenue in the pursuit of accountability, and an end to impunity.

Al-Haq presents this Q&A, to provide a digestible but rigorous understanding of the workings of the Court in the Palestine context, as well as the importance of the upcoming decision of the Pre-Trial Chamber on the Court’s territorial jurisdiction in Palestine.

[2] See Times of Israel, ‘US says “prepared to recognize” Israeli annexation of parts of West Bank’ (28 April 2020), available at: https://www.timesofisrael.com/us-says-it-would-recognize-israeli-annexation-of-parts-of-the-west-bank/.