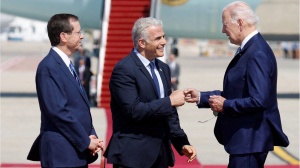 As they met on 14 July, President Biden and Israel’s Prime Minister Lapid reaffirmed the United States’ commitment to Israel’s ‘security’ as well as the strategic U.S.-Israel partnership, with the doubtful objective of “repairing the world”. They further “affirm that they will continue to work together to combat all efforts to boycott or de-legitimize Israel, to deny its right to self-defense, or to unfairly single it out in any forum, including at the United Nations or the International Criminal Court” which they label as a so-called “source of antisemitism”.[1]

This attack against Palestine’s proceedings before the International Criminal Court (ICC), is not new. In 2015, following the opening by the ICC’s Office of the Prosecutor of a preliminary examination into the Situation in Palestine, some States politicised the proceedings before the Court and attempted to cripple the Court financially. The same line of argument was reproduced in 2020.[2] Another attack against the ICC was launched by the US in September 2018 and included “banning ICC and its personnel, such as its judges and prosecutors”, thus targeting the independence of the Prosecutor and the judiciary. By June 2020, the US had revoked the visa of the ICC Prosecutor and other staff members of her office. The US targeting of ICC staff members crystallised in 2020 with the issuing of an Executive Order which allowed the US President, under the pretext of a national emergency, to suspend the visa and “freeze the assets of any foreign person deemed […] to have engaged with, or assisted the ICC in its efforts to investigate, detain, or prosecute the personnel of the United States or its allies”.

This latest “combat” against the so-called efforts to “unfairly single out” Israel at the ICC and the United Nations, is the latest continuation of Israel’s protracted smear campaign targeting Palestinian civil society organisations, supported by the United States. Recently, the US further attempted to circumvent Israeli accountability by discrediting the UN Commission of Inquiry through an unconvincing argument related to the “longstanding disproportionate attention given to Israel in the Council”. Once again, short of any proper legal argument tackling the findings of the Commission, this constitutes a desperate attempt to, “ensure that the entrenched culture of impunity for international crimes committed by the United States and its allies, in particular Israel […] remains intact”.

Turning to the content of the joint statement, it is essentially comprised of inconsistencies, contradictions, and irrelevant claims.

First, the reference to the right of Israel to self-defense is flawed on many levels. This right is enshrined in Article 51 of the United Nations Charter, which provides an exception to the prohibition upon the use of force in the event of “an armed attack” launched against a Member State of the United Nations.[3] It therefore belongs to the law against the use of force, jus ad bellum, which regulates the initiation of hostilities. Conversely, the investigation of the ICC in the Situation in Palestine concerns humanitarian law, jus in bello, (as well as human rights law) which applies during an armed conflict. The Preamble of Additional Protocol I clarifies that IHL must be applied “without any adverse distinction based on the nature or origin of the conflict or on the causes espoused by or attributed to the Parties to the conflict”.[4] Furthermore, the terms “attack” for the purposes of self-defence is used interchangeably with “aggression” by the International Court of Justice (ICJ).[5] The traditional definition of aggression contained in resolution 2274, adopted by the UN General Assembly in 1974 provides that “aggression is the use of armed force by a State against the sovereignty, territorial integrity or political independence of another State, or in any other manner inconsistent with the Charter of the United Nations, as set out in this Definition”.[6]

However, the State of Palestine has not been involved in any such use of armed force against Israel. Most importantly, the concept of natural self-defence, which extends the notion of armed attack or aggression to an attack emanating from armed-non state actors, is not supported under a reading of article 2(4) of the UN Charter in the context of the occupation of Palestine. Indeed, in light of the protracted occupation of Gaza and the West Bank, including East Jerusalem, it is difficult, if not impossible, to support the view that such an occupation, which Israel alleged in 1967 was an exercise of its right to self-defence, is still nowadays proportionate and necessary.[7] In light of the above, we hardly see how the current international investigations conducted in the Situation of Palestine denies Israel’s right to self-defence- rather Israel’s reliance on self-defence arguments, to propel the continuation of the occupation into perpetuity, breaches the principles of necessity and proportionality, amounting to a violation of the jus ad bellum incurring responsibility as an internationally unlawful act.

Furthermore, an obvious contradiction appears in this joint statement between the attempts to deliver justice and the so-called commitment to the two-state solution. This is an irrelevant reference to a vague and baseless political peace process. We stress that protracted occupation and apartheid and its growing settlement enterprise are imposing the facts on the grounds, while applying Israeli law to the OPT, which amounts to de facto annexation. This can hardly be seen as paving the way for a two-state solution but rather is the imposition of one Jewish State in historic Palestine and the erasure of the Palestinian people from it.

The intervention of the international community is meant to counter this appalling situation by holding those accused of core international crimes, including war crimes and crimes against humanity responsible, which is “a necessary ingredient for any peace and reconciliation”. It is also intended to ensure that core international crimes will not go unpunished and to fill the gap arising from the State’s failure to comply with their obligation to investigate, and if appropriate, to prosecute, their nationals potentially responsible for these crimes. We further fail to see how this alliance and reaffirmed commitment contributes to “repairing the world”. Instead, it is crystal clear that the current agreement will further entrench the Israeli apartheid regime.

Similarly, the reference to antisemitism constitutes another baseless accusation and reveals the weakness, if not the non-existence of Israel’s legal argument with respect to international criminal justice, which perpetuates the climate of impunity for core international crimes in Israel. In 2016, Richard Falk, the then Special Rapporteur on the situation in the Palestinian territory occupied since 1967, sent a letter to the UN Secretary-General where he denounced Israel’s strategy to “take attention away from the issues raised” by “shooting the messenger” instead of responding to the message. It is thus critical to remind Third States “of their responsibility to take steps that will bring this unprecedented ordeal to an end”. Indeed, Third States, including the United States, have an obligation not to recognise the illegal situation created in the OPT, as of 1967. They also have to refrain from assisting in the violations of peremptory norms of international law, which, in the situation of Palestine, are for instance the prohibition of forcible transfers of population and the denial of the Palestinian peoples’ right to self-determination.

In light of the above, we call on Third States, including the United States and Israel, to refrain from impeding or discrediting the investigation conducted by the ICC’s Prosecutor in the situation of Palestine, as well as the investigation of the above-mentioned Commission of Inquiry. We further urge Third States to support these investigations and to apply their universal jurisdiction, when possible, pursuant to Article 146 of the Fourth Geneva Convention.

[4] Protocol Additional to the Geneva Conventions of 12 August 1949, and relating to the Protection of Victims of International Armed Conflicts (Protocol I), 8 June 1977, Preamble.