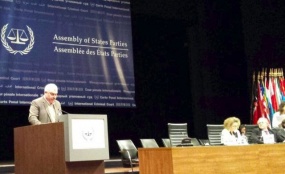 FIDH and Al-Haq Oral Statement at the General Debate of the Fourteenth Session of the Assembly of States Parties (The Hague, 18 – 26 November), delivered by Mr. Shawan Jabarin, FIDH Vice President and Al-Haq General Director.

Its an honor to address the 14th Assembly of States Parties (ASP) in the name of Al-Haq and the International Federation for Human Rights (FIDH) and its 178 member organisations.

Today, I arrived in The Hague from Palestine – leaving behind victims of the most heinous crimes who are looking to the ICC to vindicate their rights.

During the past year we have witnessed important developments at the ICC, including the Prosecutor's request to open an investigation into the most serious crimes committed in Georgia, the first situation outside the African continent. We also welcome the rapid decision to open the preliminary examination into the situation in Palestine, following Palestine's 12(3) declaration and accession to the Rome Statute. Al-Haq and FIDH together with its members and partners organisations will continue to support the Prosecutor's efforts to fight impunity for the crimes under its jurisdiction.

In the framework of the general debate states have highlighted their firm commitment to a strong and independent International Criminal Court, from all regions.

But some States have also tried to undermine the ICC's credibility by politicising judicial proceedings and the application of its Statute. Furthermore, there are states that are trying to bind the Court's hands financially, thereby effectively incapacitating it.

We call on States Parties to uphold, at every opportunity, the independence of the Court, and to respect its judicial processes and decisions. We direct this comment of course to the discussion around the agenda items proposed by Kenya and South Africa.

But we also want to highlight unduly reductionist views on the Court's role in countries where parties seek a political solution to ongoing conflicts. Palestine is a prime example where some states seek to delay the delivery of justice due to political considerations. FIDH and Al-Haq must underline that a peace process does not thwart victims' legitimate call for accountability and reparation.

Accountability is not an obstacle to the peace process, but rather a necessary ingredient for any sustainable peace or reconciliation.

FIDH and Al-Haq call on you recognise the work that the ICC needs to carry out in the coming year, and to set a budget that will allow it to optimally function. As the Court is stretching its recourses across multiple situations, it is only natural that the Court requires further financial backing.

In increasingly troubled times of conflict and violence, we look towards the ICC to provide a beacon of hope for victims of atrocities. Along that line we welcome the report presented by the Office of the Prosecutor on its preliminary examinations. It is an important document that enables more transparency about that process, and encourages positive complementarity.

FIDH and Al-Haq further welcomes that the reparations mandate of the ICC has finally become operational this year. We encourage States Parties to renew their support to the Trust Fund for Victims, and to cooperate on the implementation of reparation orders to provide redress to victims.Finally, rather than weakening the institution through political attacks and rigid approaches to funding or cooperation, let us think creatively about how to support and fully finance this Court to meet its mandate. Victims of atrocity crimes deserve no less.