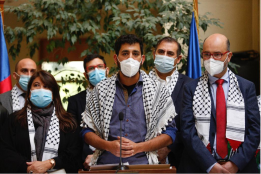 Al-Haq welcomes the drafting and tabling of a bill in the Chilean Parliament prohibiting the importation of goods produced in and sourced from illegal settlements in occupied territories. The resolution will prevent the importation of any goods, products, or services originating in Israel’s illegal colonial settlements across Palestine. If passed, the law will punish the importation of such products and services imposing criminal penalties on violators, with fines up to five times the customs value of the illegally sourced goods. This action is essential in helping to obtain justice for the Palestinian people and for all people suffering land dispossession and displacement under occupation. It is also an important step in moving Chile toward meeting its obligations under international law.

Al-Haq commends Chile’s continued contributions to Palestinians in their quest for justice and their inalienable rights, including the right to self-determination. In the past, the Chilean Parliament has called on its government to review treaties concluded with Israel to ensure they do not define Palestine as a part of Israel. Chile has also issued guidance for potential investors, tourists, and citizens who would visit or invest in Israel or the Occupied Palestinian Territory to ensure they do not contribute to the colonization of Palestine and to advise on the consequences of any actions that may violate international law. At the time those resolutions were passed, the Parliament called on the Government to ban the importation of products from illegal settlements. The Chilean Parliament now meets its own call to action in drafting and tabling such a law.

In May 2019, Al-Haq received a delegation of Deputies of the Chilean Parliament representing parties from across the political spectrum. In that meeting, Al-Haq briefed the delegation, which included members of the Chilean media and representatives of the Palestinian community in Chile, on Israel’s settlement enterprise, and the deteriorating human rights situation on the ground. This meeting included the showing of a short documentary film on Ahava, an Israeli cosmetic company that exploits Palestinian natural resources of the Dead Sea, as well as an engaging discussion about the importance of Chile and other States meeting their obligations under international law, including their legal obligation to not recognize a situation arising from unlawful conduct as lawful, and to actively cooperate to bring the unlawful situation to an end, to prevent the continued oppression of the Palestinian people. At this meeting, the delegation re-iterated its commitment to passing a bill prohibiting the importation of illegal settlement goods, and Al-Haq is heartened to see this commitment is being fulfilled.

We commend Chile on its long-standing support of the Palestinian people and their inalienable rights denied for 73 years, due to Israel’s institutionalized oppression, domination, and fragmentation of the Palestinian people, embedded in its settler-colonial and apartheid regime. Al-Haq further applauds the drafting and tabling of a bill banning the importation of illegal settlement goods, services, and products, and calls on Chilean Deputies from across the political spectrum to support its passage into law.