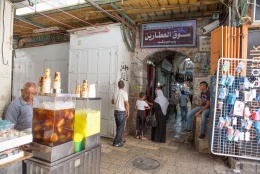 On 25 May 2021, at around 1:00 am, the Jerusalem municipality, under the protection of the Israeli Occupying Forces (IOF), erased Palestinian wall murals painted inside the Sheikh Jarrah neighbourhood.[1] The attempt to expunge this form of expression from the sight of world is just another example of Israel’s systematic policies of domination and suppression of the Palestinian people, which intensified in the wake of this month’s Palestinian opposition against its settler-colonial and apartheid regime.

Starting around the month of Ramadan, in response to ongoing forcible transfer procedures targeting several Palestinian families from the Sheikh Jarrah neighbourhood, Jerusalem, and a series of assaults on Palestinian worshippers in the Al-Aqsa Mosque compound, the Palestinian people, from both sides of the Green Line, stood in unity in a remarkable outpouring of demonstrations to oppose Israel’s systemic apartheid policies and practices aimed at entrenching its domination.

Jerusalem, the epicentre of the Palestinian struggle, continues to be targeted by an ongoing campaign of repression against Palestinians, including those exercising their right to freedom of assembly to demonstrate against the forcible displacement of Jerusalem communities, amounting to war crime and crimes against humanity. The IOF repressive campaign has been based on multiple arbitrary arrests, including of journalists in the course of their duty, the excessive recourse to force to repress peaceful assemblies, the denial of health services, and the facilitation of colonial settlers’ violent incursions into the Al-Aqsa Mosque compound.

Campaign of Suppression of Palestinian Resistance in Jerusalem

Between 25 and 31 May, the IOF launched a campaign of arbitrary arrests against some 40 Palestinians, including two journalists, in several neighbourhoods of Jerusalem, including the Old City, Jaba’, al-Wad Street, Shu’fat, al-Tur, Qalandia refugee camp, al-‘Eisawiyya, Silwan, and Sheikh Jarrah. They also issued summon orders to two Palestinians from al-Tur.[2]

During the reporting period, Al-Haq documented a number of arbitrary arrests that were carried out with excessive use of force. On 25 May, at around 6:00 pm, the IOF assaulted and then arrested Wisam Sidr, in Bab Hutta, in the Old City. He was later transferred to the hospital for treatment as a result of the IOF assault. Two days later, on 27 May, at around 3:00 pm, the IOF arrested Hamza Abu Sneina from the Hadassah Hospital, where he was receiving treatment for his injuries sustained during escalations in Jerusalem.

In the face of IOF attacks in Jerusalem, Palestinians have demonstrated a remarkable show of support with residents of the Sheikh Jarrah neighbourhood at risk of forcible transfer from their homes, and against decades of Israel’s institutionalised domination and oppression. Throughout Ramadan, Palestinian peaceful demonstrators would gather in the neighbourhood to break the fast publicly with Sheikh Jarrah residents, in support of Palestinian struggle and in resistance to Israel’s oppression. These demonstrations were severely repressed by the IOF, who used tear gas, skunk water and sound bombs to disperse them, before completely closing off the neighbourhood.[5]

Throughout the week, the IOF have pursued the same suppressive policies and practices against peaceful demonstrators standing in support with threatened residents from Sheikh Jarrah, as well as Batn al-Hawa, Silwan, south of the Old City, which is also the target of forcible transfer policies. In particular, on 25 May 2021, at around 9:00 pm, the IOF patrolled near a solidarity tent in Batn al-Hawa, filmed the crowd of demonstrators, while trying to provoke them and incite an incident. The following day, at around 10:00 am, the IOF attacked, beat and arrested Palestinians demonstrating in front the Central Court in Jerusalem, during a court hearing on the forcible transfer of Batn al-Hawa. On 29 May 2021, Sheikh Jarrah continued to be the target of IOF attacks, as the soldiers suppressed, beat, and fired sound bombs at Palestinian demonstrators at the western entrance of the neighbourhood, who were demonstrating the closing of the neighbourhood’s entrances.[6]

As the IOF strengthened their crackdown on Palestinians, they continued to support and protect illegally transferred in settlers in their violent actions towards Palestinians in Jerusalem. Dozens of colonial settlers – in gangs ranging between around 50 to 140 - stormed the Al-Aqsa Mosque compound, at 9:00 am daily from 25 to 27 and from 30 to 31 May 2021, under the protection of the IOF. On 30 May 2021, the settlers were accompanied by the Israeli Minister of Housing when they stormed the courtyards of Al-Aqsa Mosque.[7]

Al-Haq field reports highlight that illegally transferred in Israeli settlers continued to benefit from total impunity. On 28 May 2021, a settler fired his personal pistol in the air and threatened Palestinians in al-Tur neighbourhood, before being removed without arrest by the IOF.[8]

Apartheid, Denial of Fundamental Rights and Freedoms, in Contravention with International Law

The right to resist apartheid policies and practices, in the legitimate furtherance of the right to self-determination, and is notably conditioned by the ability to exercise the right to freedom of thought, conscience and religion, the right to hold opinions without interference, the right to peaceful assembly, as well as the right to freedom of association, which are all recognized human rights under the 1966 International Covenant on Civil and Political Rights.[10] As per the International Covenant on Civil and Political Rights, such rights may only be restricted under strict conditions, and should be prescribed by law, necessary to protect public safety, order, health, or morals or the fundamental rights and freedoms of others.[11]

Through its repressing policies and practices of arbitrary arrests, continuing repression of peaceful assemblies, and denial of health coverage, Israel actually punishes Palestinians for exercising their legitimate and recognized human rights, while reinforcing the coercive environment conducive of forcible transfer. Under Article 50 of the Hague Regulations and Article 33 of the Fourth Geneva Convention also enshrined under customary international law, applicable to occupied Jerusalem, collective punishments are strictly prohibited in all circumstances.[12]

If any further evidence were needed, the IOF crackdown on Palestinian opposition of Israel’s unlawful policies and practices is once again illustrative of its apartheid regime over the Palestinian people as a whole. Israel’s thwarting of Palestinian opposition to its oppressive practices and policies is one of the inhuman acts constitutive of its apartheid regime, namely the “persecution of organizations and persons, by depriving them of fundamental rights and freedoms, because they oppose apartheid”.[13] Al-Haq recommends the that the UN Commission of Inquiry investigate Israeli acts of collective punishment in Jerusalem and widespread and systematic acts of persecution and apartheid in Palestine, and over the Palestinian people as a whole. .

[5] See, for example, Al-Haq, “Action Alert: International Community Must Take Immediate and Concrete Measures to Halt Israel’s Aggression against Palestinian Jerusalemites,” 10 May 2021, available at: https://www.alhaq.org/advocacy/18289.html; and Al-Haq, “Sheikh Jarrah and Silwan: Ongoing Nakba and Israeli Dispossession of Palestinians,” 27 May 2021, available at: https://www.alhaq.org/advocacy/18442.html.