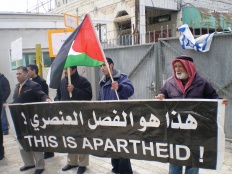 Geneva – The Cairo Institute for Human Rights Studies (CIHRS) delivered a joint statement on behalf of 114 Palestinian, regional, and international civil society organizations, sending a strong message to UN member states that now is the time to recognize Israel’s establishment and perpetuation of an apartheid regime over the Palestinian people as a whole, including Palestinians on both sides of the Green Line and Palestinian refugees and exiles abroad.

“Civil society from around the world has resoundingly affirmed its support for the inalienable rights of the Palestinian people and their pursuit of international justice and accountability. It is only by recognizing the reality of Israel’s apartheid regime that we can begin to work together to overcome apartheid in the 21st century,” said Elizabeth Rghebi, Levant Researcher for CIHRS.

Delivered during the 43rd regular session of the UN Human Rights Council under item 9, which addresses issues of racism, racial discrimination, and xenophobia, the joint statement reiterated the persistent failure of third states to put an end to Israeli impunity. Beginning 1 July 2020, the Israeli government is set to move forward with plans to illegally annex large parts of the occupied West Bank, which will further entrench Israel’s apartheid regime of systematic racial domination and oppression over the Palestinian people. As annexation looms, forty-seven UN rights experts have warned that “The morning after annexation would be the crystallization of an already unjust reality: two peoples living in the same space, ruled by the same state, but with profoundly unequal rights. This is a vision of a 21st century apartheid.”

Accordingly, the organizations called for the reconstitution of the UN Special Committee against Apartheid and the UN Center against Apartheid as critical steps towards ending Israel’s institutionalized impunity and apartheid regime. These mechanisms would serve as an important avenue to monitor Israel’s widespread and systematic human rights violations against the Palestinian people and ensure that third States abide by their responsibility under international law responsibility not to aid or assist in the maintenance of Israel’s apartheid regime and to cooperate to bring an end to apartheid through the auspices of the UN.

In addition, the organizations called on UN member states to endorse the December 2019 concluding observations of the UN Committee on the Elimination of Racial Discrimination (CERD), which recognized, for the first time, the disproportionate impact of Israeli policies and practices of racial segregation and apartheid on Palestinians on both sides of the Green Line. This followed the submission of a comprehensive joint parallel report to CERD by Palestinian, regional, and international civil society organizations, which detailed Israel’s establishment and maintenance of an apartheid regime over all Palestinians.

Countries including South Africa, Namibia, and Pakistan raised concerns about Israeli apartheid during the 43rd session of the Human Rights Council. In a statement under agenda item 7 – on the situation of human rights in Palestine and other occupied Arab territories – South Africa said, “My delegation expressed concern last year that the annexation of Palestinian territory was highly likely. The CERD found in its December 2019 observations that the strategic fragmentation of the Palestinian people formed part of a policy and practice of segregation and apartheid. Annexation would be yet another example of complete impunity that makes a mockery of this Council and would gravely breach international law."

Pakistan underscored the right to self-determination as a fundamental human right of people under illegal foreign occupation or alien domination – a right that Palestinians and millions elsewhere continue to be deprived decade after decade: “During the past 70 years, [Palestinians] have been driven from their homes and their homeland, militarily occupied and obliged to live in conditions resembling apartheid.”

During the general debate under item 9, Namibia drew a parallel to its own historical experience under occupation and apartheid and said, “We remain steadfast in our pursuit to see increased concrete action towards the elimination of racism, racial discrimination and related intolerances globally, including those under foreign occupation such as Western Sahara and Palestine.

“Yesterday, South Africa and Namibia, countries which overcame apartheid, spoke out against Israel’s apartheid regime and denounced the widespread and systematic human rights violations committed against the Palestinian people. They know apartheid when they see it. We call on all UN member states to follow South Africa and Namibia’s lead and to take a courageous stand against Israeli apartheid imposed on the Palestinian people as a whole and to work to bring this injustice to an end,” said Rania Muhareb, Legal Researcher and Advocacy Officer with the Palestinian human rights organization Al-Haq.