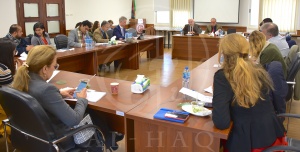 Ramallah, Al-Haq Center for Applied International Law – On 20 February 2020, Al-Haq and Palestinian human rights organisations, including the Jerusalem Legal Aid and Human Rights Center (JLAC) and Addameer Prisoner Support and Human Rights Association, held a briefing for the diplomatic community working in the occupied Palestinian territory. During the briefing, which was hosted by the Al-Haq Center for Applied International Law in Ramallah, Palestinian human rights organisations addressed the human rights situation in Palestine and provided updates on recent developments, including the proceedings before the International Criminal Court (ICC), the recent publication of the United Nations database of businesses operating in illegal Israeli settlements, the recently-announced Trump planentrenching Israeli apartheid over the Palestinian people, and the upcoming 43rd regular session of the United Nations (UN) Human Rights Council.

During the briefing, Al-Haq’s general director, Shawan Jabarin, urged diplomatic representatives in Palestine and their respective Governments to stand firmly in support of an investigation by the ICC into the Situation in Palestine, to hold Israeli perpetrators accountable for suspected war crimes and crimes against humanity committed against Palestinians, and to bring an end to the pervasive culture of Israeli impunity. Critically, Al-Haq urged third States to support international justice and accountability in the Situation in Palestine and warned against the dangers of politicising proceedings before the ICC. In particular, Al-Haq called on third States to withdraw their amicus curiae briefs arguing against the Court’s jurisdiction over the Situation in Palestine as undermining efforts to pursue international justice for victims of atrocity crimes.

In his presentation, JLAC director Issam Aruri addressed the deteriorating human rights situation on the ground and the implications of the Trump plan in furthering illegal Israeli settlement construction and expansion, including the forcible transfer of Palestinians through escalating house demolitions, in particular in the city of Jerusalem. The briefing also addressed the publication of the UN database on settlement business activities and highlighted its importance as an active and living tool for corporate accountability in the occupied Palestinian territory, highlighting it as a step in the right direction towards holding business enterprises accountable for their involvement in human rights abuses, including the entrenchment of Israel’s settler-colonial enterprise and further threatened annexation of occupied territory, in breach of peremptory norms of international law.

Al-Haq placed these developments within the context of Israel’s entrenched policies and practices of racial segregation and apartheid over the Palestinian people on both sides of the Green Line, as recognised by the UN Committee on the Elimination of Racial Discrimination (CERD) in December 2019, and stressed that Israel has maintained an apartheid regime of systematic racial domination and oppression over the Palestinian people as a whole, in violation of the Rome Statute of the International Criminal Court. Accordingly, Al-Haq argued that the concluding observations of the UN treaty bodies must increasingly inform State practice and be adopted by the Human Rights Council to ensure respect for the rights of Palestinians.

Addressing the context of Israeli impunity, Sahar Francis, director of Addameer, highlighted Israel’s systematic use of torture and other ill-treatment against Palestinian detainees and the deprivation of Palestinians’ right to a fair trial, including through the admission of confessions extracted under torture in Israeli courts. She further recalled that Israel unlawfully transfers Palestinian detainees to prisons outside the occupied Palestinian territory, which may amount to crimes under the Rome Statute and warrants immediate investigation by the ICC. Finally, she recalled that Addameer, along with partner organisations, has submitted a written statement on torture to the UN Human Rights Council under item 3 and that Palestinian human rights organisations were engaging under multiple agenda items at the upcoming 43rdregular session.

Overall, Al-Haq and partners urged third States to support and avoid politicising Palestine’s pursuit of international justice and accountability, including by issuing statements in favour of an ICC investigation, ensuring the continuity and annual update of the UN database for corporate accountability, activating universal jurisdiction mechanisms to prosecute suspected crimes in their own courts, and supporting the draft resolution on accountability as well as engaging under item 7 of the upcoming Human Rights Council session, which is set to begin on 24 February 2020.