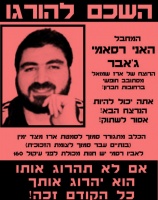 Open Letter: To the High Contracting Parties of the Geneva Conventions,

As an organisation dedicated to the protection and promotion of human rights in the Occupied Palestinian Territory (OPT), Al-Haq is gravely concerned about reports that large financial rewards are being offered by various settler groups for the murder of former Palestinian prisoners released as part of the recent prisoner swap between Israel and Hamas.

On 26 October 2011, Al-Haq’s field researcher documented an incident where several settlers led by Baruch Marzel entered a small supermarket in Haret Jaber Street in Hebron (H-2) and demanded the shop-owner, Ibitsam ‘Ayed Jaber, tell them about the whereabouts of Hani Rosmi Jaber, her brother in law. They also left a flyer in Arabic addressed to the residents of Hebron promising a “big price” in return for any information on Mr. Jaber.

The settlers were subsequently joined by Knesset Member Michael Ben-Ari as well as a member of the Municipal Council of Kiryat Arba’ settlement who continued to post and distribute flyers in Hebrew addressed to Israeli settlers explicitly calling for Mr. Jaber’s murder. The events took place in the presence of Israeli soldiers and policemen, who stood by without interfering in the settlers’ acts.

Furthermore, Benzi Gufstein, a member of the Municipal Council of Kiryat Arba’ settlement made the following inflammatory statement: “The safest place for the terrorist is prison. We will make sure he will not be able to roam freely and call upon all who see him to act in accordance with the scripture ‘kill or be killed.’”

The media reported on a similar incident in which a family from Yitzhar settlement near Nablus offered a 100,000 USD reward for the assassination of the murderers of one of their family members killed 13 years ago. The targets are Khuweiled and Nizar Ramadan, two Palestinian prisoners liberated last week. Another analogous incident was reported from the Tubas area further substantiating the emergence of a practice of incitement to violence and hatred against Palestinians by settlers including public figures.

As an Occupying Power, Israel’s primary duty is to protect the occupied Palestinian population by undertaking effective measures to prevent and punish settler attacks by enforcing the law against settlers and holding them legally accountable for their actions. Notwithstanding, Israel continues to grant immunity to settlers for acts of violence in blatant violation of its duty of due diligence to repress criminal acts carried out by private actors. By failing to properly investigate incidents and punish perpetrators of violent acts, the Israeli authorities are effectively condoning such crimes and harbouring the emergence of a widespread practice of settler violence against Palestinians and their property.

In light of the foregoing, Al-Haq calls upon the High Contracting Parties to the Geneva Conventions to uphold their obligation to ensure respect for the Conventions, as enshrined in Common Article 1 to the Conventions, by taking concrete measures to pressure Israel to comply with its obligations as an Occupying Power to protect the Palestinian civilian population.