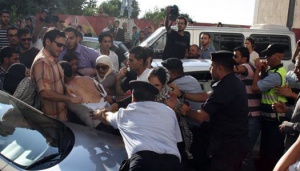 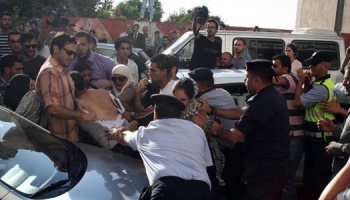 s organizations dedicated to the promotion and protection of human rights in the Occupied Palestinian Territory (OPT), the Palestinian Council of Human Rights Organizations (PCHRO) condemns the recent violent attacks by Palestinian Authority (PA) police forces on peaceful demonstrations and demands that the perpetrators of these violations be prosecuted.

Ahead of a visit to Palestinian President Mahmoud Abbas by deputy Israeli Prime Minister Shaul Mofaz, a group of Palestinian youth called “Palestinians for Dignity” organized a peaceful demonstration on 30 June 2012 to oppose his planned visit on 1 July at the presidential compound in Ramallah and to request the cancellation of this visit. As former Israeli Minister of Defense and former Chief-of-Staff of the Israeli Occupying Forces (IOF), Mofaz is considered a war criminal related to his role in ordering the targeted killings of many Palestinian political leaders, including former Fatah leader Thabet Thabet, former head of the Popular Front for the Liberation of Palestine (PFLP) Abu Ali Mustafa and Sheikh Ahmed Yassin, one of the founding members of Hamas. As head of the IOF during the Second Intifada, Mofaz also gave the orders to invade Palestinian cities in the West Bank in 2002, causing atrocious deaths of Palestinians in Jenin Refugee Camp and other Palestinian cities.

According to testimonies from protestors and photographic evidence from the demonstration in Ramallah’s city center on Saturday, 30 June, uniformed police forces and members of the Criminal Investigation Unit (CIU), used unjustified violence against the demonstrators. When the demonstrators were requested by the police to turn back from their march towards the presidential compound, they refused, insisting on their right to protest peacefully. The police then began to attack the protestors, beating them with their batons; punching, kicking and choking them, as well as hitting them with their walkie-talkies, all in the presence of Ramallah police chief Abdul Latif Qaddoumi and his deputy Mohammad Abu Bakr. A number of demonstrators were arrested and subsequently brought to police stations in the city, while the police forces continually harassed and intimidated the demonstrators, accusing them of being agents of foreign groups.

The PCHRO has documented intentional attacks by the police on journalists, despite being aware of their journalist status. In one particular case, journalist Mohammad Jaradat was attacked when he fell to the ground and a police officer stood on his head. He was subsequently taken to a police station where the police forces continued to beat him in a yard outside the police station before being taken to the CIU, where he found another six men that had been similarly arrested. Mr. Jaradat was then transferred to Ramallah Hospital, where he remained for three days. At least five other protestors were also taken to the hospital as a result of their injuries.

The PCHRO also emphasizes the involvement of members of the CIU dressed in civilian clothing amongst the demonstrators whom, upon receiving orders, began to violently attack the demonstrators.

On the following day, 1 July, another demonstration took place in protest of the previous day’s violence by police and to further protest against the visit of Shaul Mofaz. Once again, the police, under the command of the Ramallah police chief and his deputy, attacked the demonstrators, beating both men and women indiscriminately, and continuing to target a number of journalists. These included Saed al-Hawari, who is a photographer with Reuters News Agency, photo-journalist Ahmed Musleh, photo-journalist Issam al-Rimawi, photo-journalist Mahmoud Hraibat and photo-journalist Ahmed Ouda. At least fifteen individuals who were seriously injured were subsequently transferred to Ramallah Hospital.

The second consecutive day of attacks serves as evidence that the police and CIU are implementing a systematic policy of violence and force to suppress peaceful demonstrations. The PCHRO denounces the use of violence against protestors at peaceful demonstrations and reiterates their rights to assembly and freedom of expression, which have been severely violated by PA forces.

The PCHRO also considers the repression of these peaceful demonstrations as part of a policy to discourage further dissent and views departing from the official line of the PA.

The PCHRO reiterates its condemnation of these attacks on peaceful gatherings and the prevention of demonstrators from exercising their constitutional right to assembly and freedom of expression relating to Article 26 of Palestinian Basic Law, Article 2 of Public Meeting Law, in addition to International Human Rights Law. Although there have been many declarations by the Palestinian government and heads of security agencies about upholding respect for basic rights and freedoms, it is clear that a large gap exists between such declarations and actual reality, where the culture of respect for individual’s rights and freedoms by the police and security services is far from being institutionalized.