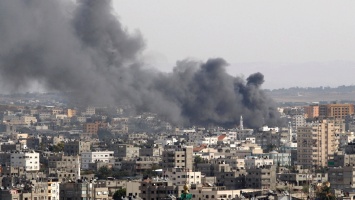 The Palestinian Human Rights Organizations Council (PHROC)* strongly condemns the violations of international law committed during the recent Israeli military offensive on the Gaza Strip. These violations are representative of Israel’s disregard for its legal obligations towards the Palestinian people, which has been a continuous feature of its military occupation of the Occupied Palestinian Territory. All grave violations of international law must be promptly brought to an end, investigated and punished in accordance with the standards set by international law. The failure of the international community to categorically condemn and ensure accountability for previous well-documented violations, including those included in the Report of UN Fact-Finding Mission on the Gaza Conflict of 2009, has indirectly sanctioned Israel’s attacks against civilians during the recent eight-day-long military offensive.

According to our close monitoring of the situation, many of the Israeli concerted attacks on the Gaza Strip were direct attacks on civilians, or disproportionate attacks. According to the monitoring by Al Mezan Centre for Human Rights, since Wednesday 14 November, at least 162 Palestinians were killed as a result of Israel’s attacks. The majority of the victims are civilians, of whom at least 37 were children and 13 were women. Another 1,039 people were injured, including 315 children and 179 women. At least 963 houses have also been damaged or destroyed, including 92 completely. Of those 92 houses, 52 were directly attacked; including 35 deliberately targeted by direct Israeli attacks on houses, referred to as ‘roof-knocking’ attacks. Another 179 houses sustained serious damages. Moreover, Israeli attacks caused varying damages to 10 health centers, 35schools, 2 universities, 15 NGO offices, 30 mosques, 14 media offices, 92 industrial and commercial facilities, 1 UNRWA food distribution centre, 8 governmental building, 14 police/security stations, 5 banks, 34 vehicles, 3 youth clubs, 3 cemeteries, and 2 bridges.

We express our deep concern over the statements made by leading international community leaders; including the United Nations, United States, European Union and EU Member States. These statements, supporting Israel’s right to self-defense, fail to take into account Israel’s belligerent occupation and policies resulting in the continuous dispossession and forcible displacement of Palestinians. The silence over these policies and ignoring the context of occupation allows for grave breaches of international law to continue, and to harm hundreds of civilians.  So far, international interventions failed to condemn direct, deliberate, or disproportionate attacks on the civilian population of the Gaza Strip, a practice which can only serve to perpetuate the culture of impunity and the commission of grave breaches of international law by Israel.

The population of the Gaza Strip has been subjected to an illegal regime of closures for over five years, which has serious implications on the access to adequate health care, housing, water and sanitation. The destruction of civilian infrastructure as result of the recent attacks has further hampered these essential services. The military closure of the Gaza Strip amounts to collective punishment, which is a violation of international humanitarian law and must lifted with no delay.

In light of the devastation that has been wrought on the civilian population of the Gaza Strip, the continuous denial of the right of the Palestinian people to self-determination and the lack of genuine engagement of the UN Security Council, the undersigned organizations call upon the international community to: