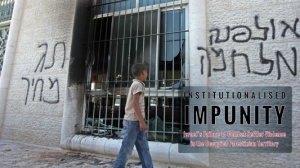 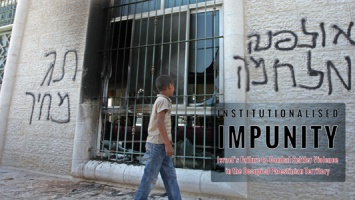 Third States are under an obligation to combat organised crime by ensuring that support, financial or otherwise, is not being lent to violent settler groups by private and public entities within their jurisdiction. A new report by Al-Haq, “Institutionalised Impunity: Israel’s Failure to Combat Settler Violence in the Occupied Palestinian Territory”, details how these duties, including the obligation to investigate, stem from the domestic laws and public policy of some States, set in accordance with international law.

Suspicion has been raised about financial and other support being lent to settler groups and settlements from associations and individuals in France, the Netherlands, the United Kingdom and the United States. In September 2011, for instance, the French Defense League, a private group in France, sent its members to conduct military trainings for Israeli settlers.

In addition to combating support for organised crime within their jurisdictions, Third States should consider taking risk-aversive restrictive measures against settlers and settler groups involved in such crimes, including individually targeted travel restrictions and visa bans. The EU Political and Security Committee recommended such measures on 16 November 2012. Thereafter, the EU’s Magreb/Mashreq Working Group recommended that EU missions in the region “step up monitoring on the Israeli authorities” in their law enforcement against settlers. In January 2013, the European Parliament responded to a Parliamentary question pertaining to these developments by stating that, “actions by Israeli settlers in occupied territory are not an internal matter for Israel.”

Violent acts mounted by settlers regularly involve attacks on Palestinian agriculture, including the destruction of hundreds of olive trees each month. The European Union (EU), which provides funding to the Palestinian agricultural sector, should be urged to take measures to contest and monitor the Israeli authorities law enforcement against the destruction of crops and attacks on farmers by settlers. Reportedly, the EU, which has pressured Palestine not to use international mechanisms such as the International Criminal Court (ICC), has recently insisted that Palestine not pursue membership of the International Olive Council - an application it launched in 2009 - for fear that it could negatively impact on-going negotiations.

In a growing number of attacks labelled ‘Price Tag’, settler groups have publicly proclaimed their intention to influence the political decisions of the Israeli government through acts of violence, which have come in response to government measures that negatively affect settler interests. The intensity and severity of these attacks have, in many cases, resulted in the indirect forcible transfer of Palestinians from their land, often in order to make way for the construction of settlements. Some of these acts and the groups that commit them have received support from Israeli state institutions for educational, social and religious activities, as well as some public officials.

“‘Price Tag’ attacks have allowed settler groups to successfully mobilise a public campaign advocating for the use of physical violence against Palestinians”, said Shawan Jabarin, General Director of Al-Haq. “Israel’s legislative and administrative regime in the West Bank, coupled with its institutional unwillingness to prosecute offending settlers, has created a climate of impunity allowing such violence against the Palestinian population to intensify”, he added.

The report calls on the government of Israel to take all necessary measures to ensure effective law enforcement against settlers and protection of the civilian Palestinian population against further attacks. As an Occupying Power, Israel is internationally obligated to provide protection, effective remedies and access to justice for victims of such attacks.

Al-Haq reiterates its call on the Palestinian representatives to take measures to seek the jurisdiction of the ICC to bring Israeli leaders to justice for unlawful settlement activities and its effects on the Palestinian population. In so far as such acts may entail the commission of war crimes, acts of violence by settlers may also attract their individual criminal responsibility.