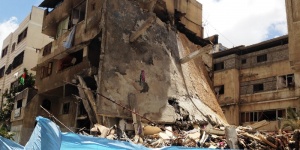 
Briefing Note I: The destruction of water and sewage infrastructure under international humanitarian law

Over the past two weeks Israel has been engaging in hostilities in the occupied Gaza Strip. ‘Operation Protective Edge’ has been characterized by Israel’s indiscriminate and disproportionate attacks against Palestinian civilians and civilian objects resulting in a mounting death toll of 597 Palestinians[1] and over 100,000 displaced as of 22 July 2014.[2]

The Al-Haq Briefing Note Special Series related to the occupied Gaza Strip will address select aspects of Israel’s conduct of ongoing hostilities against the Gaza Strip. In particular this Special Series will apply the framework of international humanitarian law to Israeli acts or omissions. As an Occupying Power engaged in hostilities, Israel must abide by its obligations under international humanitarian law (IHL), which are set out primarily in the Regulations Annexed to the 1907 Hague Convention respecting the Laws and Customs of War on Land (Hague Regulations) and the Fourth Geneva Convention of 1949, both largely reflective of customary international law.[3]

ISRAEL’S CONTROL OVER THE GAZA STRIP

Israel, as the Occupying Power, effectively controls the borders of the Gaza Strip, including air, land and sea. Israel’s control is evidenced by, inter alia, the creation of a buffer zone. The buffer zone, which is a military no-go area, runs within and along the Gaza Strip borders. The precise depth and overall size of the buffer zone on land in the proximity of the fence along the border with Israel and along the Gaza Strip’s shore are uncertain. Likewise, the parameters in terms of people access to the restricted area are similarly uncertain.[4] At sea, Israel has installed a naval blockade, restricting access to the Gaza’s territorial waters.

Related to Israel’s control over the borders of the Gaza Strip is the seven-year long imposed closure, constituting a form of collective punishment. The closure has played a pivotal part in furthering the dire humanitarian situation faced by Palestinians in the Gaza Strip by severely restricting the movement of Palestinians and the flow of goods.[5] In addition, by restricting the entrance of construction materials, the closure has hindered Palestinians from recovering from damage and destruction caused during previous Israeli offensives, including ‘Operation Cast Lead’ and ‘Operation Pillar of Defense’.[6]

Past Israeli offensives have caused great and lasting damage and destruction to vital infrastructure. Israel deliberately destroyed the Gaza Power Plant in 2006, resulting in that the Gaza Strip has remained dependent on the supply of electricity from the Israel Electric Corporation.[7] Similarly, Israel destroyed a sewage pumping station in August 2011.[8]

On 21 December 2012, the UN General Assembly expressed its concern about the “widespread destruction caused by Israel, the occupying power, to vital infrastructure, including water pipelines and sewage networks” in the occupied Gaza Strip, which “pollutes the environment and negatively affects the water supply and other natural resources of the Palestinian people”.[9] Furthermore, in a report published in July 2013, the United Nations Conference on Trade and Development indicated that acute energy and water shortages in Gaza were due to the Israeli military operation, contributing to the deceleration of economic activities there.[10]

THE DESTRUCTION OF VITAL INFRASTRUCTURE DURING ‘OPERATION PROTECTIVE EDGE’

Similar to Israel’s previous conduct of hostilities, ‘Operation Protective Edge’ has resulted in the destruction of and damage to infrastructure providing vital resources to the occupied Palestinian population in the Gaza Strip. For example, Israel has destroyed a pipeline in Beach Refugee Camp and two wells in Gaza City, cutting off water supplies for 100,000 Palestinians. Meanwhile, damage caused to a sewage plant has resulted in the spilling of 25 million liters of raw sewage into the sea. [11] In addition, a water pipeline was closed in Beit Lahiya Municipality in order to avoid water contamination caused by sewage from the Abu Rashed Pumping Station.[12] Oxfam has also alerted to the severe consequences of shortages of fuel, stating that “[w]ater pumps and sewage plants could stop functioning within days because of severe shortages of fuel”.[13]

The UN Office for the Coordination of Humanitarian Affairs has warned that the humanitarian emergency in Gaza could place 900,000 people at risk of losing access to water and sanitation services.[14] Meanwhile the UN Relief and Works Agency for Palestinian refugees (UNWRA) noted that the “public health sector in Gaza is nearing collapse” after 49 UNRWA installations were damaged, including the destruction of water tanks supplying a health center in central Gaza.[15] On 10 July 2014, the World Health Organisation reported that the situation in Gaza was “most critical” as only ten days of fuel reserves remained to power the health sector and hospitals cancelled all elective surgeries to cope.[16]

Article 43 of the Hague Regulations, reflective of customary international law, requires that the Occupying Power restore and ensure, as far as possible, public order and civil life in the occupied territory. This places an onus on the occupant exercising de facto control, to ensure the welfare of the occupied population, arguably including by ensuring that Palestinians enjoy water, sanitation and electricity services. In addition, Article 53 of the Fourth Geneva Convention prohibits the destruction of real or personal property belonging individually or collectively to private persons or to the State or other public authorities except where such destruction is rendered absolutely necessary by military operations whilst taking into consideration the welfare of the occupied population. [17] In this regard, while military necessity may in some instances justify intervention, the striking of this careful balance “should never result in total disregard for the interests and needs of the population.”[18]

Israel’s destruction of and damage to water and sewage infrastructure cannot reasonably meet the criteria of military necessity and most certainly it is not in line with the principles of distinction and proportionality. Israel is required to distinguish between civilian and military objects.[19] Accordingly, Israel must limit its attacks to military objectives, which make an effective contribution to military action and offer a definite military advantage by their nature, location, purpose or use.[20]  Israel must also take into consideration any ‘incidental loss of civilian life, injury to civilians, damage to civilian objects, or a combination thereof, which would be excessive in relation to the concrete and direct military advantage anticipated’ and take all feasible measures to ensure that civilian objects are not subject to attack.[21] The specific obligation to take constant care to spare the civilian population and civilian objects and minimize incidental loss and damage is a rule of customary international law.[22] In particular, Article 54 (2) of Additional Protocol I of 1977, establishes a narrower proportionality test prohibiting attacks during hostilities, which “destroy, remove or render useless objects indispensible to the survival of the civilian population” such as water installations, supplies and irrigation works “whatever the motive”.[23] The extensive destruction of property in this manner, not justified by military necessity and carried out unlawfully and wantonly constitutes a grave breach of the Geneva Conventions and is subject to universal jurisdiction as a war crime. While Israel is not a party to the Additional Protocol I of 1977 the rule is considered declaratory of customary international law, and is featured in Israel’s military manual.[24] Additionally, the intentional directing of attacks against civilian objects, which do not constitute military objectives is a war crime under Article 8(2)(b)(ii) of the Rome Statute.[25]

In terms of the destruction of infrastructure vital for the provision of resources necessary for the survival of Palestinians such as water, Israel cannot be considered to be fulfilling its obligations under international humanitarian law. Indeed, as held by the UN Bureau of Committee on Exercise of Inalienable rights of Palestinian People, Israel’s destruction of ‘critical civilian infrastructure’ is in violation of Israel’s obligations as an Occupying Power under the Fourth Geneva Convention.

Finally, regardless of the closure on the Gaza Strip, Article 23 of the Fourth Geneva Convention and Article 70 of Additional Protocol I, requires the free passage, as rapidly as possible, of essential foodstuffs, medical and hospital stores.

[3] While Israel has accepted the applicability of the Hague Regulations on the basis of their customary nature, it has declared that it will only abide by the ‘humanitarian provisions’ of the Fourth Geneva Convention, although it has refused to specify which provisions it regards as humanitarian. For a recent judgment see HCJ 2690/09, Yesh Din et al. v Commander of the IDF Forces in the West Bank et al., (Judgment, 23 March 2010), paragraph 6.

[9] Permanent Sovereignty of the Palestinian people in the Occupied Palestinian Territory, including East Jerusalem, and of the Arab population in the occupied Syrian Golan over their natural resources (A/RES/67/229)

[10] Report on UNCTAD assistance to the Palestinian people: Developments in the Economy of the Occupied Palestinian Territory, TD/B/60/3 (8 July 2013) at http://unctad.org/meetings/en/SessionalDocuments/tdb60d3_en.pdf (last accessed 17 July 2014)