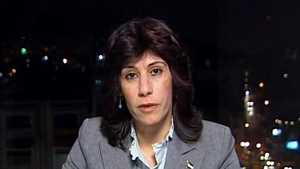 We, the undersigned Palestinian coalitions and associations, request your immediate intervention on behalf of Palestinian Legislative Council Member Khalida Jarrar who has recently been issued with an Israeli military order detailing her forcibly transfer. The order states that Jarrar must leave her place of residence in Ramallah to Jericho for a period of six months with immediate effect.

At approximately 1.30AM on 20 August 2014 Israeli forces surrounded Jarrar's home in Ramallah and delivered to her the military order which she refused to sign. The order states that Jarrar is 'dangerous to the general security of the area'. Since then she has taken refuge at the PLC building in Ramallah where she remains.

The current order is clearly a continuation of the Israeli policy of targeting elected representatives of the Palestinian people. There are currently 36 PLC members being held in Israeli prisons, 28 of these are being held in administration, which is a form of detention without charge of trial.

The order issued to Jarrar comes in the midst of the on-going war in Gaza and the continued targeting of Palestinians in the West Bank, including East Jerusalem. For too long there has been an unwillingness by yourself as Secretary-General and the United Nations as a whole to pressure Israel to end its occupation policies, whether these be the current war on Gaza, the treatment of political prisoners or the targeting of Palestinian elected representatives. It is this unwillingness that has led Israel to believe that it can continue to act free in the knowledge that it will not be held accountable. It is clear that unless enough pressure is brought on Israel, particularly by the United Nations, Israel will not change its policies.

Jarrar was elected to the PLC in 2006 and has been active within Palestinian society for many years, particularly around the issue of Palestinian political prisoners whom she has consistently advocated on their behalf. She is also the head of the PLC Prisoners Committee and is the PLC representative to the Council of Europe. Jarrar has also been banned from travelling internationally since 1998, apart from one occasion in 2010 when she visited Jordan for medical treatment.

The order issued against Jarrar clearly violates Article 42 and 49 of the Fourth Geneva Convention which relate, respectively, to the prohibition of assigned residency of protected persons, and the prohibition of the forced collective or individuals transfer.

We call on your in your capacity of as Secretary-General of the United Nations to intervene immediately with Israel to ensure that: