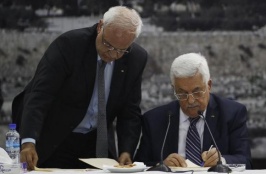 On the evening of 31 December 2014, the President of the State of Palestine, Mahmoud Abbas, formally decided to accede to the Rome Statute of the International Criminal Court. The Palestinian Human Rights Organisations Council (PHROC) heartedly welcome this significant decision as it allows the Court to hold to account persons responsible for committing serious international crimes against the occupied Palestinian population in the Occupied Palestinian Territory (OPT). As such, the Court will be in a position to afford Palestinian victims the justice that they have been denied through the Israel domestic judicial system. Furthermore, the Court, being able to exercise jurisdiction over crimes committed in the OPT following Palestine’s accession, could deter the commission of future crimes.

PHROC urges the State of Palestine to immediately deposit its instrument of accession to the UN Secretary-General pursuant to Article 125 of the Rome Statute. PHROC further calls on the State of Palestine to submit a so-called Article 12(3) Declaration alongside its instrument of accession. In doing so, Palestine ensures that the Court can exercise jurisdiction over crimes committed in the past.