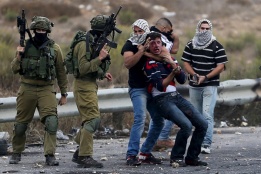 The situation in the Occupied Palestinian Territory (OPT) has undoubtedly taken a turn for the worse, with the eruption of built-up Palestinian frustration from decades of colonial suppression. Although settler attacks and extrajudicial killings of Palestinians have become characteristic of the occupation, such incidents have surged in past weeks, while Israel has reported uncoordinated deadly attacks against its nationals. Al-Haq data provides that 48 Palestinians have been killed by the Israeli Occupying Forces (IOF) since the beginning of 2015, with 17 individuals killed in October alone. The UN agency OCHA further documented the injury of 794 Palestinians by the IOF between 29 September and 5 October 2015.[1]

Al-Haq has been documenting and monitoring Israel’s human rights record for over 35 years. In those years, Palestinians have been subjected to Israel’s vicious policy of fragmentation that aims at ensuring Israeli dominance over the West Bank, including by further entrenching its illegal annexation of East Jerusalem. In the West Bank, Israel’s colonial policy is manifested in the current half million Israeli settlers that illegally live on Palestinian land. These settlements thrive on appropriating natural resources that belong to the native Palestinian population, including its fertile lands, minerals and water sources. The policy is also seen in physical barriers, such as the Annexation Wall, checkpoints and settler-only roads which slice through the West Bank, and other Israeli measures, including the denial of building permits and consequent house demolitions, aimed at forcefully transferring and displacing Palestinians out of Area C and East Jerusalem. In the Gaza Strip, an eight-year suffocating closure physically divides the Palestinian people and imposes severe living conditions on Palestinians there. Due to the closure and numerous Israeli offensives, UN agencies have forecasted that Gaza will be uninhabitable by 2020.[2]

Al-Haq’s General Director Shawan Jabarin affirms, “The international community must pressure Israel to end its occupation and allow Palestinians their inalienable right to self-determination. Measures, including punitive house demolitions and the increasing use of live ammunition against Palestinians, aimed at bringing the situation back to the unlawful status quo are dangerous, counterproductive and short-sighted. Israel and the international community cannot only treat the symptoms of the current escalation, they must treat its cause- the Israeli occupation. Continued suppression of the inalienable, basic rights of the Palestinian people is not only unjust, but will perpetuate cycles of violence.  The occupation must end.”

[2]UNCTAD, Report on UNCTAD assistance to the Palestinian people: Developments in the economy of the Occupied Palestinian Territory, 2015 available at: http://unctad.org/en/pages/newsdetails.aspx?OriginalVersionID=1068;