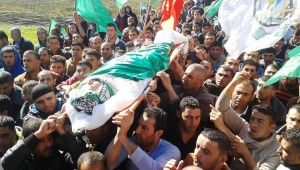 On that day at approximately 2:45 am, about 21 Israeli soldiers disguised as Palestinian civilians broke into the Hospital, pretending to be accompanying a woman in labour. Israeli officials claim that the IOF raided the hospital in order to arrest Azzam Al-Shalaldeh who is accused of stabbing a settler on 25 October 2015 and who was hospitalised for injuries. They also claim that Abdallah, acting as a companion to his cousin Azzam, attacked the IOF while trying to arrest Azzam and hence, they shot him dead. However, witness statements collected by Al-Haq confirm that Abdallah did not attack the IOF, nor pose a threat.

Khaled Al-Suweiti, 50, a hospital patient and witness to the incident who shared Hospital room 207 with Azzam and three additional patients, recalls that five armed people dressed in civilian clothes broke into their room. Abdallah was in a bed when one of the undercover agents approached Khaled and pointed a gun to his head telling him they were "soldiers". By that time, Abdallah had gotten out of bed to stand, when he was immediately shot by the undercover IOF and fell to the floor. While lying on the ground, the IOF agents shot Abdallah several more times. They then abducted the wounded Azzam who was on another bed next to Khaled.

During the raid, the undercover agents threatened hospital staff, including nurses, at gunpoint and prohibited them from moving inside the hospital.

Al-Haq is gravely concerned about the IOF's use of undercover soldiers in raids on protected civilian structures, and strongly condemns the raid on Al-Ahli Hospital. Al-Haq demands prompt, impartial and effective investigations into the incident, and that all perpetrators are held accountable for their violation of the law.

The silence of the international community in the face of Israel's continued violations against Palestinians grants Israel continued impunity.

[1] This provision is part of customary international law.