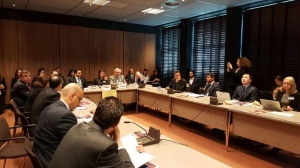 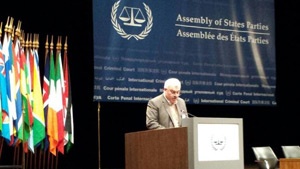 In its fourteenth session, the assembly is concerned with the adoption of the 2016 budget of the Court. It has become clear that states are reluctant or opposing to provide the Court with the budget needed for it to carry out its ambitious and admirable mandate in an efficient and fair manner. The assembly session also sheds light on attempts by states parties to inject politics into the independent judiciary.

During the assembly, the Prosecutor of the ICC also presented her activities report on situations in preliminary examination, including that on Palestine. In it, the Prosecutor reiterated that Palestine is a State for the purposes of the Rome Statute and that it is proceeding with its examination of alleged crimes such as direct attacks against the occupied Palestinian population in the Gaza Strip during ‘Operation Protective Edge’. The report also referred to Israel’s illegal transfer of settlers into the West Bank.

During the assembly session, Al-Haq together with the State of Palestine, the International Federation of Human Rights, and the Open Society Justice Initiative held a formal side event entitled Palestine and the ICC: Advocacy Opportunities and Legal Obligations. During the well-attended event, Al-Haq’s Director Shawan Jabarin emphasised that the case of Palestine represents a crucial opportunity for the Office of the Prosecutor to show that it can exert its mandate in regions beyond the African continent and withstand political pressure.

Al-Haq together with FIDH also delivered an oral statement during the general debate of the assembly session.  Mr. Jabarin urged the assembly to “uphold, at every opportunity the independence of the Court, and to respect its judicial processes and decisions”. In the same vein, Mr. Jabarin underlined that “a peace process does not thwart victims’ legitimate call for accountability and reparation”. Mr. Jabarin referred to State interference in Palestinian pursuit for justice as an example.

In relation to the assembly session, Al-Haq along with other civil society organisations issued a statement calling on states to support the court and referring to the Middle East.

The Assembly of States Parties acts as the legislative body of the Rome Statute regime and Al-Haq are looking to the States Parties to lend their full support to the Court, including by providing it the financial resources.