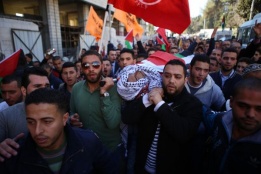 Last week, three months after his death, Mustafa Al-Khatib was buried in Al-Bireh in the West Bank. The circumstances surrounding Mustafa’s killing and burial are emblematic of Israeli policy in the Occupied Palestinian Territory (OPT) and illustrate a system of injustice.

Between October to December 2015, 134 Palestinians were killed by Israel in the Occupied Palestinian Territory (OPT). Al-Haq has noted with concern a policy of “shoot to kill” in which even in situations where Israeli Occupying Forces (IOF) were in a position to subdue an alleged Palestinian attacker, the IOF instead proceeded to fatally shoot the suspect at close proximity. Such killings have been in violation of Palestinians’ right to life.

Further, Israel has rarely investigated whether force used was appropriate, including in cases of conflicting witness testimony or video evidence. Following the killing of alleged attackers, Israel has typically held the bodies and later conditionally releases them for burial. Conditions for turning over bodies have included limitations on funeral attendees and place of burial, and prohibiting autopsies.

On 12 October 2015, Mustafa Adel Al-Khatib, 17, was shot dead in the area of Bab Al-Asbat (Lion’s Gate) near Jerusalem’s Old City. Mustafa was a student in his final year of high school at Al-Ibrahimiya School. The circumstances surrounding Mustafa’s killing remain unclear.

Israel claimed that Mustafa attempted to attack an Israeli border police officer. Eyewitnesses interviewed by Al-Haq reported Mustafa being shot in the back. One eyewitness stated that the situation was calm in the area at the time of the incident; he then saw Mustafa running away from the IOF.  Mustafa tripped and fell to the ground on his face. The witness stated that an Israeli soldier then shot one bullet at Mustafa. Other members of the IOF gathered around Mustafa and continued shooting at him. A second witness interviewed by Al-Haq also confirmed that he saw soldiers shooting at Mustafa as he laid on the ground with his back to them. Both witnesses stated that they did not see whether Mustafa attempted to stab anyone or not, and that they did not hear the IOF calling for Mustafa to stop or any warning shots being fired. The IOF did not allow anyone to approach the scene and no medical assistance was offered to Mustafa. An Israeli ambulance arrived approximately an hour later and took Mustafa’s body. No videos of the incident were released.

On 18 October 2015, the IOF raided Mustafa’s home in Jabbal Al-Mukabber and took measurements of the house. The family has moved out of their rented home, fearing that it might be demolished. Israel held Mustafa’s body for three months, and only released him upon condition that the family would bury Mustafa in the Ramallah-area.

Mustafa’s killing and the pressures placed on his family due to burial conditions and the threat of home demolition mirror the case of Fadi Samir ‘Alloun. In the early hours of 4 October 2015, Fadi, 19, was killed by an Israeli police officer in Jerusalem. Israel claimed that Fadi stabbed an Israeli settler before being killed. Little information has been made public regarding the victim, and a video of the alleged attack has not surfaced. Instead, video recordings only show Fadi being chased by Israeli settlers near the Jerusalem Light Rail close to the Al-Musrara area, before being fatally shot by an Israeli police officer.

In the video, Fadi fell to the ground after the first shot fired by the police officer. The officer continued shooting Fadi.  Settlers can be heard encouraging police to shoot throughout the video, and shouting “death to Arabs.”  Fadi did not pose an imminent threat to any individual at the time he was killed. Israel held Fadi’s body for one week before being given to his family.

Prior to releasing Fadi’s body, Fadi’s father, Samir had to sign a paper agreeing to only have 50 close family members attend the funeral and to bury Fadi in Al-‘Essawiya cemetery, despite having the family’s cemetery in the Old City of Jerusalem. Samir had to pay 20,000 Shekels (over $5,000) as guarantee  that these conditions were respected. At 2:00 am on Sunday 12 October, Fadi’s body was released to the family. The family said their farewell and Fadi was buried in Al-‘Essawiya. On 18 October 2015, Fadi’s home was surveyed by the IOF, although no demolition order has been issued.

Adalah and Addameer human rights organizations sent a request to open an investigation into the circumstances of Fadi’s killing. To-date, the Israeli Police Investigation Unit (“Mahash”) has not responded.[1]  An earlier request by the organizations and family to conduct an autopsy was refused. The Israeli Court refused the request on the basis that there was no reason to conduct an autopsy, as the police officer was acting in accordance with his ‘responsibilities.’

Three months after both Mustafa and Fadi were killed, the situation across the Occupied Palestinian Territory continues to be marked by Israel’s unlawful policies. Al-Haq again affirms that the root cause of violence in the OPT is the occupation. Continued excessive use of force, impunity, and acts of collective punishment, including those targeting the families of Palestinians killed, will only perpetuate the situation.Moreover, the failure to conduct adequate investigations into the killings of Palestinians, let alone prosecute individuals,[2] sends a clear message to Israeli state and non-state actors that their conduct is acceptable and no questions will be asked.

[1]Adalah and Addameer Demand an Investigation into the Killing of Palestinian Youth Fadi Alloun, 12 October 2015, http://www.addameer.org/news/adalah-and-addameer-demand-investigation-killing-palestinian-youth-fadi-alloun

[2] Israel’s unwillingness to genuinely investigate and hold to account individuals for violations of Palestinian rights is clear: since 1987, no Israeli soldier or commander has been convicted of unlawfully causing the death of a Palestinian in the OPT. Amnesty International ‘Trigger Happy: Israel’s Use of Excessive Force in the West Bank’ (27 February 2014), <https://www.amnesty.org/en/documents/MDE15/002/2014/en/> 6