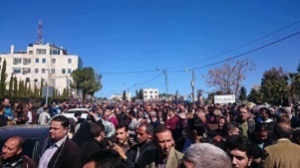 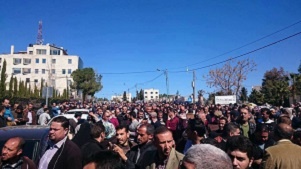 Al-Haq is monitoring the large-scale strike waged by Palestinian teachers at public schools throughout the West Bank. The strike commenced on 10 February 2016 with the suspension of classes after the fourth period of the school day. The schoolteachers’ main demands included the granting of cost of living and work allowances with a retroactive effect starting from 1 January 2014. On the same day, the government presented the Teachers Union with a proposal to end the strike. The proposal was rejected, as the Teachers Union and many teachers found it to be unfair, failed to meet their demands, and was inconsistent with workers’ rights. A general strike was then declared in public schools throughout the West Bank.

During the monitoring and documentation process related to the strike, Al-Haq’s field reports have indicated that numerous teachers have been arrested. Al-Haq issues this alert to underscore that authorities must respect the teachers’ right to strike, and should reach an agreement with the Union as soon as possible so that the academic year can continue. This right is guaranteed by the amended Palestinian Basic Law as well as by international conventions and human rights standards, which the State of Palestine acceded to without any reservations.

Al-Haq emphasizes that the arrest of teachers for exercising their right to strike falls within the framework of arbitrary detention, as classified by the United Nations Working Group on Arbitrary Detention. Al-Haq calls upon government authorities to protect teachers’ rights and ensures that schools return to their regular schedules as soon as possible.

Al-Haq will soon issue a comprehensive report on the teachers’ strike, which will include data on the strike, the applicable legal framework, and recommendations. Al-Haq will also include information related to the strike in its shadow reports on the Palestinian government’s implementation of the International Covenant on Civil and Political Rights and the International Covenant on Economic, Social, and Cultural Rights.