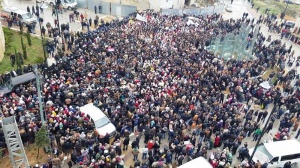 On 23 February 2016, Palestinian security apparatuses set up checkpoints throughout the West Bank in order to prevent striking teachers from gathering and protesting near the Council of Ministers' building in Ramallah. The checkpoints, which were set up at the entrances of cities and towns, were accompanied by the following measures: searching and preventing public transportation, especially buses, from reaching Ramallah by holding drivers' identification cards and licenses; inspecting vehicles and ordering teachers to step out, holding their identification cards and ordering them to return to where they came from. In addition, numerous teachers were served with summonses by the security apparatuses. Several other violations were carried out against teachers in various governorates following the strike.

In light of this, Al-Haq would like to reiterate the warning published on 17 February 2016 concerning the Teachers' Union's actions which resulted in the teachers' strike. The Teachers' Union demanded that the government take full responsibility, act to guarantee teachers' rights and dignity, and provide them with a decent living, in order to ensure the teachers' quick return to their classrooms and the resumption of the educational process.

Violating any of the aforementioned rights and freedoms amounts to a constitutional crime and perpetrators must be held accountable. This is prescribed in Article 32 of the Palestinian Basic Law which states, "any violation of any personal freedom, of the sanctity of the private life of human beings, or of any of the rights or liberties that have been guaranteed by law or by this Basic Law, shall be considered a crime. Criminal and civil cases resulting from such violations may not be subject to any statute of limitations. The National Authority shall guarantee a fair remedy to those who suffer from such damage."

Given the teachers' strike and the Teachers' Union's activities, Al-Haq calls on the following: