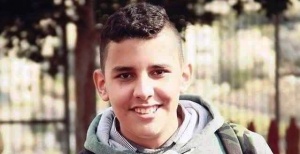 On Monday 20 June 2016 at approximately 10:30 pm, a group of young Palestinians from Beit 'Ur Al-Tahta village, Ramallah, went to the Leen Land park and swimming pool in the nearby Beit Sira village. The group included Mahmoud Badran, Majd Abd Al-Ra'ouf Al-Shami, Amir Isam Khroub, Hadi Ali Mahmoud Badran, all 15, Daoud Isam Abu Hassan and Majed Muhammad Badran, both 13,and Akram Hilal Othman, 21. They spent the evening playing and swimming there, and decided to return to their village, in one car, at approximately 1:30 am that night.

At approximately 1:40 am, as they were about 40 metres away from the bridge of settler-only Road 443 leading to Beit Ur Al-Tahta, heavy shooting targeted their car. The shooting continued until the car hit the bridge's wall.

As a result, 15-year-old Mahmoud Badran was injured and died. His body was kept under Israeli custody until Wednesday night. Amir was shot with a live bullet in his kidney and was transferred to Hadassah hospital. Akram was hit by live bullets on the right side of the chest and shrapnel to his head and was transferred to the ICU in the Ramallah hospital. Daoud was injured by the live bullets on the right thigh. while Hadi sustained injuries due to shrapnel in the head and chest. The Israeli Occupying Forces (IOF) arrested Majed and Majd, and  released them later that day.

According to Daoud, there was a white Toyota car stopped on the bridge of Road 443, which presumably was the source of the gunshots at the car. Majd stated that when he got out of the car, he saw one person dressed in civilian clothes and three soldiers on the bridge.

Later that day, the IOF stated that Mahmoud’s killing was a mistake, and thought that the boys in the car had thrown stones and Molotov cocktails at settler cars passing through Road 443 earlier on Monday, 20 June. The IOF opened an investigation on the case. Given the circumstances surrounding the killing, Al-Haq notes that the case exemplifies other instances of Israel’s shoot to kill policy and not one that can be deemed a “mistake.”

Information gathered from Al-Haq's field work showed that the situation was calm at the time of the shooting. Accordingly, there was no reason for live fire to be used; rather the car could have been simply stopped by the IOF. It appears as though the IOF had been waiting and intending to shoot at any Palestinian car that night.

Israel regularly uses excessive force against Palestinians, including children, causing death or injury, even when other measures could have been used. There have been countless cases of Palestinians killed who did not pose any threat to the lives of the IOF or others. The killing of Mahmoud Badran appears to amount to unlawful killing.[1] In light of this, Al-Haq calls for prompt, impartial, independent, effective, and transparent investigations into the killing of Mahmoud and to hold all perpetrators accountable.