Main Menu
Al-Haq Supports B’Tselem
Latest Topics
Palestinian Organisations Call on the Prosecutor of the ICC to Open an Investigation into International Crimes in the OPT
Special Focus: Yitzhar Settler Violence is on the Rise
testing arcgis online map
Palestinian Voices: Nidal Rabie, Turmusayya
Al-Haq Calls on the EU to Support the Proposal for a Wide Ban of Trade with and Support for Illegal Settlements
EU due diligence legislation: Organisations affected by European supply chains around the world publish recommendations
Al-Haq Supports B’Tselem
25، Oct 2016 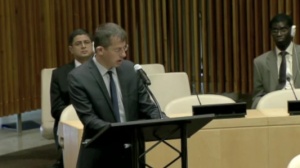 On 13 October 2016, the Director of the Israeli human rights organisation B’Tselem delivered a moving speech to the United Nations Security Council on the issue of Israeli settlements in the Occupied Palestinian Territory. The Director, Mr. Hagai El-Ad, eloquently addressed the overwhelming impact of Israeli occupation on Palestinian life. The speech also referred to the way in which Israel has misused the law to justify its injustice and the devastating  role that the Israeli High Court has had in ensuring Israeli domination.

At a time when Israel is intensifying its attacks against Palestinian and Israeli human rights organisations, Mr. El-Ad courageously called Israel’s occupation “a legal guise for organised state violence”. He also referred to increasing clarity in Israeli official language about Israel’s intention to remain in the occupied West Bank.

Al-Haq welcomes B’Tselem strong speech to the Security Council and draws attention to their call for the end of the occupation. Al-Haq also underscores B’Tselem message that words that are not backed up with action from the international community equal approval for Israel to continue with its occupation.

The speech delivered was received angrily by Israeli officials across the board. Israeli Prime Minister Netanyahu immediately declared his intention to change the law on national service for the purpose of excluding B’Tselem from receiving volunteers. Furthermore, Likud lawmaker David Bitan stated that Mr. El-Ad should be stripped of his Israeli citizenship.

Al-Haq stands in solidarity with B’Tselem and congratulates it on its strong performance at the UN Security Council.