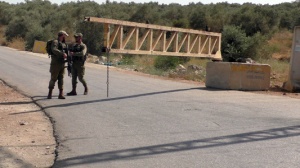 On the evening of Friday, 16 June 2017, Israeli Occupation Forces (IOF) killed Baraa Saleh, 18, Adel Ankoush, 18, and Osama Atta, 19, in occupied East Jerusalem.[1] The three were shot to death while carrying out an attack against the IOF. All three were from the Palestinian village of Deir Abu Mash’al, north of Ramallah. A few hours after the attack, the IOF began to impose collective punishment measures against Deir Abu Mash’al village.

The IOF immediately set up a metal gate at the main entrance of Deir Abu Mash’al on the same evening of the incident, restricting the entry and exit of Palestinians from the village. Around 5 a.m. the next morning, some 50 Israeli soldiers and border police officers raided Deir Abu Mash’al from its main entrance and three side roads. They searched the homes of the three youths’ families, took pictures and measurements of the home, and told the families that their homes were going to be punitively demolished.[2] The IOF also raided two additional homes in the village, one belonging to Ahmad Atta and the other to Muhammad Zahran, neither of whom are direct relatives of the three youth. Also on 17 June, the IOF confiscated around 50 unregistered vehicles from the village in addition to one licensed vehicle. They opened fire at Palestinian youth throwing rocks, injuring two with live ammunition and one with a rubber bullet. 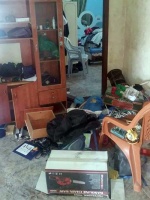 For the next week, the IOF imposed a punitive closure on Deir Abu Mash’al. The Local Council was forced to receive permission from the IOF for the exit and return of some 51 students preparing to take their Tawjihi exam in neighbouring villages on the morning of Saturday, 18 June 2017. On Sunday, 19 June around 5 a.m., the IOF raided Deir Abu Mash’al again and detained Inaya Atta, the wife of a Palestinian prisoner. She was released that same evening. Eighteen-year-old Mustafa Zahran was also detained.[3] Both of Adel Ankoush’s parents were reportedly detained on the charge of ‘incitement.’[4] On Sunday, the closures increased and the IOF prohibited the entry and exit on foot of all Palestinian men aged 15 to 25, severely limiting access to the village that day. On Monday, June 20, the IOF authorised the entry and exit from Deir Abu Mash'al by car, also with the exception of male Palestinians aged 15 to 25. The gate at the entrance of the village continued to be manned by the IOF and was only partially open, letting in one car at a time in each direction. Palestinians underwent ID checks and their cars were subjected to thorough searches.

The collective punishment measures also affected work permits through Ni’lin checkpoint into Israel. All those bearing the family name Atta, Ankoush, or Saleh with work permits have been turned back at Ni’lin checkpoint and continue to be prevented from returning to their workplaces in Israel.[5] Although access restrictions in and out of Deir Abu Mash’al were slightly lifted on 24 June on the occasion of Eid al-Fitr,[6] the metal gate remains in place almost a month later,[7] with occasional checks by the IOF.

Measures taken by Israel in Deir Abu Mash’al in the immediate aftermath of the attack in East Jerusalem including the village’s closure, the issuance of punitive home demolition orders, and the inability of individuals to access their place of employment, form part of a systematic policy of collective punishment against Palestinians in the Occupied Palestinian Territory (OPT).[8] All forms of collective punishment are absolutely prohibited by Article 50 of the 1907 Hague Regulations, Article 33(1) of the Fourth Geneva Convention, and constitute a breach of customary international humanitarian law.[9] The Fourth Geneva Convention prohibits “penalties of any kind inflicted on persons or entire groups of persons, in defiance of the most elementary principles of humanity, for acts that these persons have not committed.”[10]

Each collective punishment measure also infringes on the human rights of village residents. Under international human rights law, the arbitrary closure of Deir Abu Mash’al violates Palestinians’ freedom of movement within the OPT.[11] Moreover, the home raids and detention of some village residents violate the right not to be subjected to arbitrary or unlawful interference with one’s privacy, family, or home,[12] and the right to liberty and security of person.[13]

All of the families of the Palestinians killed on 16 June 2017 have now received punitive home demolition orders. If carried out, the punitive demolitions would render 13 Palestinians, including 4 children, homeless. This would not only constitute an act of collective punishment, but will also violate prohibitions on the destruction of property by the Occupying Power,[14] and the basic rights of the families to adequate housing,[15] to choose their own residence,[16] to family life,[17] and their protection from cruel, inhuman or degrading treatment or punishment.[18]

[5] These restrictions remain in place as of July 13.

[8] This is by no means the first case in which Israel imposed collective punishment measures on an entire Palestinian community in the aftermath of an attack. See, for example, Al-Haq, “Qabatiya Subject to Closure & Collective Punishment by IOF” (11 February 2016), available at: http://www.alhaq.org/documentation/weekly-focuses/1019-qabatiya-subject-to-closure-a-collective-punishment-by-iof.

[14] Article 53 of the Fourth Geneva Convention prohibits “[a]ny destruction by the Occupying Power of real or personal property belonging individually or collectively to private persons, […] except where such destruction is rendered absolutely necessary by military operations.” This provision must be interpreted reasonably and proportionately.[14] Indeed, the “[e]xtensive destruction and appropriation of property, not justified by military necessity and carried out unlawfully and wantonly” amounts to a war crime in breach of Article 8(2)(a)(iv) of the Rome Statute of the International Criminal Court.

[18] Article 7, ICCPR. Article 16, Convention against Torture and Other Cruel, Inhuman or Degrading Treatment or Punishment (CAT). See also CAT/C/ISR/CO/4, Concluding Observations of the Committee Against Torture, Israel (May 2009) para. 33.