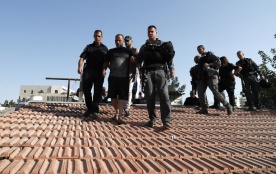 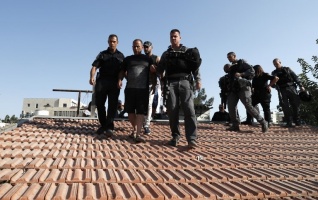 “A large group of IOF raided my home at 5 am, on 5 September, Tuesday. My husband and son Muhammad were with me at home. Muhammad’s wife and kids were at his mother-in-law’s in KufrAqab. The IOF first unplugged the gas in the kitchen. They then removed my husband, who is on a wheelchair, and took him outside of the house. I told them that I would not leave my house, so then 2 police officers dressed in black clothes dragged me out of my house. My son Muhammad stayed inside…after, everyone was forced out. They brought a big truck and put all of our furniture on it, and they gave Muhammad a paper with a phone number on it. One of the IOF said to call it in order to get the furniture back, and told Muhammad that there would be a fine of 160,000 shekel for the cost of removing the furniture.” (Testimony of Faheema Shamasneh, taken on 5 September 2017.)

Three generations of the Shamasneh family have lived in the property since 1964. Prior to 1967, the Jordanian Custodian of Enemy Property administered the property. After the Israeli occupation in 1967, the Israeli military commander transferred the property to the control of the Israeli General Custodian of Property, to whom the family paid rent as tenants. In 2009, the Israeli General Custodian of Property issued an eviction order to remove the Shamasneh family from their home. The family challenged the eviction order in the District Court on the grounds that they had a ‘protected tenancy’ under Israel’s Tenant Protection Law, 1972 but their plea was rejected.1 In August 2013, the family appealed the eviction order to the Supreme Court but they lost their case exhausting all domestic avenues for potential redress. The Court granted the family leave of one and a half years to evacuate the property.2 In July 2017, Israel’s Enforcement and Collection Authority ordered the Shamasneh family to evacuate their home by 9 August 2017.3

The eviction of the Shamasneh family violates Israel’s obligations as Occupying Power under International Humanitarian Law. Article 46 of the Hague Regulations protects family life and states that private property cannot be confiscated. Notably, the belligerent occupant is prohibited from altering title to immoveable property in occupied territory.4 Israel has used provisions of its Tenant Protection Law, 1972, to revoke the ‘protected tenants’ status of Palestinian tenants living in properties, which prior to 1968 were supposedly claimed by Israeli Jews.5 However, a State cannot rely on provisions of its domestic law to evade its international law obligations.6 The application of Israeli law to occupied East Jerusalem and resulting evictions represent a forcible transfer of the protected population, amounting to a war crime.

The forcible transfer of the Shamasneh family from their home in Um Haroun comes two months after the Jerusalem Regional Planning Committee’s announced plans to demolish five Palestinian homes in Um Haroun to build four new Jewish settlements in the area.7 The forcible transfer forms part of Israel’s larger plans to create a Greater Jerusalem and forcibly Judaize the occupied Palestinian territory of East Jerusalem.

As Israel’s targeting of Jerusalem is continuing at a heightened pace, the international community can no longer stand idly by. Al-Haq calls on the international community to take immediate and effective action to hold Israel accountable for its violations of international law, including by fully cooperating with the preliminary examination of the International Criminal Court. Al-Haq further calls on the United Nations Security Council to impose economic sanctions on Israel to deter further colonization and maintain regional peace and security.