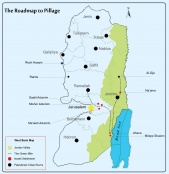 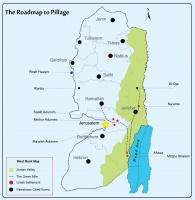 In March 2018, during the 37th Human Rights Council session in Geneva, the United Nations Office of the High Commissioner for Human Rights (OHCHR) is expected to present a report under Human Rights Council resolution 31/36. The report, and the data which shall be transmitted therein, will provide an important tool to end corporate complicity in Israel’s prolonged occupation of the Occupied Palestinian Territory (OPT). For over 50 years, Israel has occupied the West Bank, including East Jerusalem, and the Gaza Strip. Israel has used its control over Palestinian territory to unlawfully colonize Palestinian land and reap economic benefits from the abundant natural resources present for the Israeli national and settler economy.

Israel’s occupation, appropriation and annexation of Palestinian land and natural resources has also served to de-develop the Palestinian economy, fragment and isolate Palestinian communities, and relegate the OPT as a captive market. This is evidenced in the manipulation of Palestinian workers who are forced to seek employment on land unlawfully appropriated from them. While countless UN General Assembly and Security Council resolutions have condemned Israel’s violations of international law, including the continued maintenance and expansion of Israel’s settlement enterprise, the occupation has become further entrenched by the assistance of Israeli and international businesses.

In an effort to shed light on Israel’s continued violations, the Human Rights Council established a fact-finding mission (FFM) “to investigate the implications of the Israeli settlements on the civil, political, economic, social and cultural rights of the Palestinian people” throughout the OPT. The 2013 FFM report highlighted the impact of business enterprises in enabling, facilitating, and profiting from Israel’s settlement enterprise, and underscored activities that “raise particular human rights violations concerns.” These activities range from “[t]he use of natural resources, in particular water and land, for business purposes” to “[b]anking and financial operations helping to develop, expand or maintain settlements,” to “the supply of surveillance and identification equipment for settlements, the wall and checkpoints directly linked with settlements.”

In 2016, the Human Rights Council adopted resolution 31/36 calling for the production of a database of all business enterprises involved in the activities identified by the FFM report. The resolution further called for the database to be transmitted in the form of a report (hereinafter “database”), as aforementioned. The database, along with the increased worldwide focus on business complicity in Israel’s occupation, comes alongside other global developments in the field of business and human rights. These include efforts by the international community to establish a binding treaty on the regulation of activities of transnational corporations and other business enterprises under international human rights law, and the development and enactment of national action plans (NAP) on the implementation of the UN Guiding Principles on Business and Human Rights (UNGPs) by States. As such, Human Rights Council Resolution 31/36 particularly calls on business enterprises to respect human rights in the OPT in accordance with international law and the UNGPs.

Using the Database as a Human Rights Tool

The UNGPs, issued in 2011, call on States and business enterprises to respect international human rights law, as well as international humanitarian law in situations of armed conflict. States have demonstrated their commitment to the UNGPs through the development and publication of NAPs. In its NAP, the United States government, for example, notes that it encourages “businesses to treat tools like the OECD Guidelines and the UN Guiding Principles as a floor rather than a ceiling for implementing responsible business practices.” The US NAP goes on to acknowledge “the heightened risk of serious human rights impacts in conflict-affected areas” and thus “encourages corporate due diligence and reporting under such circumstances.” Germany’s NAP similarly acknowledges the heightened risk of violations in conflict areas, and underscored its “responsibility to try to ensure that German enterprises operating in such conditions have no part in any adverse impacts on human rights.”

These and all other NAPs should be read alongside the 2014 statement on the OPT of the UN Working Group on Business and Human Rights (UNWG) in order to ensure the “non-discriminatory” implementation of the UNGPs. In its statement, the UNWG reaffirmed the applicability of the UNGPs to the OPT, and recognized the situation as one of military occupation. The UNWG further underscored the role of both home and host States in implementing both unilateral and multilateral actions to effectively “prevent and address the heightened risk of business involvement in abuses in conflict situations.” Where the home or occupying state may be “unwillingly or unable to protect human rights,” the role of home states of transnational corporations becomes even more important. States policies should therefore seek to address adverse human rights impacts arising from Israel’s settlement enterprise; Palestinian organisations consider the database as a critical tool in this regard.

In this regard, it should be noted that some States, including Israel, have criticized the data that is expected to be presented in the report. It is unclear as to whether this criticism and possible other pressure on OHCHR was the source the report’s delay. Our organizations, alongside numerous regional and international organizations, therefore reiterate that the database is an important tool that can be used by States and regional and international bodies to ensure the consistent and transparent implementation of policies. By using the database, States can issue targeted guidance and engage with business enterprises domiciled in their territory and operating in the OPT to ensure they are not involved in human rights abuses. The database will similarly put businesses on notice as to their operations and relationships linked to Israel’s unlawful settlement enterprise. Further, in line with the UNGPs, businesses included in the database should provide for or cooperate in the restitution of their adverse impacts. Because the database should be updated on an annual basis, States can then consider whether appropriate actions have been taken by such enterprises, and if not, explore “civil, administrative or criminal liability” should corporate activities “commit or contribute to gross human rights abuses.”

The undersigned Palestinian organizations call on the UN Secretary-General António Guterres, the UN High Commissioner for Human Rights Zeid Ra’ad Al Hussein, and Member States of the UN Human Rights Council to ensure the timely publication and annual update of the database established under Human Rights Council resolution 31/36. We encourage States to establish and enact coherent, consistent policies on business and human rights, where the occupied Palestinian territory is not considered an “exception” to the implementation of NAPs and other domestic policies. Accordingly, we further call on all states to use the database as a tool to facilitate the implementation of measures under UNSCR 2334, including by engaging with businesses domiciled within their jurisdiction which contribute to and profit from Israel’s unlawful settlement enterprise, and by banning settlement products into their domestic markets.

Given the grave breaches of international law involved, including potential corporate complicity in international crimes, Israeli and international business included in the database, which contribute to Israel’s settlement enterprise must cease their activities immediately. Businesses that have previously and continue to profit from such activities must engage with impacted Palestinian communities to ensure effective remedy. After 50 years of occupation, the database comes as an important, instinctual step towards transparency and accountability. Our organizations thus not only call for an end to Israel’s occupation, but also an end to corporate complicity in the colonization of Palestine.

14. Coalition for Accountability and Integrity – AMAN

16. The Centre for Defense of Liberties and Civil Rights (Hurryyat)

19. The Palestinian Coalition for Economic and Social Rights, comprising:

o The Arab Forum for the Sexuality of Individual and Family

o Al-Aqda Centre for Childhood and the Youth

2According to the World Bank, ““[t]he continuous growth in the size of land allocated for settlement activity in Area C has significantly reduced land available for use by the Palestinian private sector”. See more: World Bank, Economic Monitoring Report to the Ad Hoc Liaison Committee, 18 September 2017, available at: http://documents.worldbank.org/curated/en/515891504884716866/pdf/119657-WP-PUBLIC-on-Monday-1-PM-sept-11-AHLC-report-September-8.pdf

3UN Human Rights Council, Report of the Independent International Fact-Finding Mission to Investigate the Implications of the Israeli Settlements on Civil, Political, Economic, Social and Cultural Rights of the Palestinian People throughout the Occupied Palestinian Territory, including East Jerusalem, 7 February 2013, A/HRC/22/63, (hereinafter A/HRC/22/63) available at: http://www.ohchr.org/Documents/HRBodies/HRCouncil/RegularSession/Session22/A-HRC-22-63_en.pdf

4The 2013 UN Fact-Finding Mission on Israeli Settlements detailed the activities in which businesses have been involved in the OPT violation of international law. See A/HRC/22/63, 07 February 2013, para. 96: “Information gathered by the mission showed that business enterprises have, directly and indirectly, enabled, facilitated and profited from the construction and growth of the settlements. In addition to the previously mentioned violations of Palestinian worker rights, the mission identified a number of business activities and related issues that raise particular human rights violations concerns.

8The UNGPs call on States to implement the principles “in a non-discriminatory manner” with special attention to be paid to “populations that may be at heightened risk of becoming vulnerable or marginalized.” See UN Guiding Principles on Business and Human Rights, General Principles, p.1.

9UN OHCHR, Statement on the Implications of the Guiding Principles on Business and Human Rights in the Context of Israeli Settlements in the Occupied Palestinian Territory, 6 June 2014, available at: http://www.ohchr.org/Documents/Issues/Business/OPTStatement6June2014.pdf

14Where third States have not taken concrete action to end Israel’s 50-year occupation of the OPT and annexation of Jerusalem, the European Union immediately implemented sanctions to “condemn the illegal annexation of Crimea and Sevastopol” and affirm its commitment “to fully implement its non-recognition policy.” Accordingly, while imports of products from Crimea or Sevastopol have been prohibited from entering the EU, Israeli settlement products freely flow into the EU. See Illegal annexation of Crimea and Sevastopol: EU extends sanctions by one year, 19 June 2017, European Council, Council of the European Union, available at: https://www.consilium.europa.eu/en/press/press-releases/2017/06/19/crimea-sevastopol-eu-extends-sanctions/

15See: “The Timing of the Report” subsection at http://www.ohchr.org/EN/HRBodies/HRC/RegularSessions/Session31/Pages/DatabaseHRC3136.aspx

18UN Guiding Principle on Business and Human Rights, Principle 3 and 7.