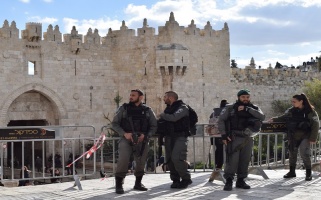 The UN General Assembly 1947 Partition Resolution (181), which was rejected both by the Palestinians and Arab States recommended granting Jerusalem a special international status under the administrative authority of the United Nations. Following the Nakba in 1948, a state of Israel was declared, extending its sovereignty beyond the borders designated by the UN partition resolution and including parts of Jerusalem, currently described as West Jerusalem, whereas the remaining eastern part of the City, was annexed by Jordan, officially in 1950.[1] In 1967, Israel occupied the West Bank including East Jerusalem and then annexed the remaining part of Jerusalem through unilateral action and Israeli laws.[2]

In addition to the excessive use of physical force, coercive measures, and land acquisition, Israel has worked to develop laws and policies that would enable it to seize control and expand its settler-colonial project throughout Palestine, more specifically in Jerusalem. Furthermore, Israel has segregated the city from the rest of the occupied territory physically but also through the applicable legal regimes. While Israel imposes its military regime on Palestinians in the West Bank and Gaza Strip, it has applied Israeli domestic laws in Jerusalem. By doing so, it has disrupted the contiguity of the occupied Palestinian territory, comprising the West Bank, including East Jerusalem, and the Gaza Strip, and served to benefit Israel’s strategic manoeuvres to divide and conquer.

Over the years, the Israeli authorities have adopted and acted upon a master plan for Jerusalem, “the capital of Israel and the centre of the Jewish people” where the demographic target for 2020 would constitute 60 per cent Jews and 40 per cent Arabs.[3] Furthermore, the Israeli Parliament (Knesset) has played a significant role in furthering Israel’s demographic control plans and reinventing a Jerusalem that fits one narrative and one people only; a Zionist-Jewish narrative.

The table below (Table 1) encompasses recent bills in the Israeli Parliament relevant to Israel’s attempts to alter the legal status of Jerusalem – in contravention of international law. The bills have focused on an array of issues relevant to claiming the city as Israel’s capital. In fact, these bills deny Palestinians’ basic human rights, including those in Jerusalem, by denying them their the fundamental right to self-determination, restricting their freedom of movement, the right to an adequate standard of living, as well as other economic, social, cultural, and civil and political rights. It should be noted that the following table provides a non-exhaustive list of bills, reviewed by the Israeli Parliament during its 20th round, which was elected on 17 March 2015 and sworn in on 31 March 2015, and relevant to Israel’s discriminatory and annexationist policies, aiming to alter the status of Jerusalem, by targeting Palestinians residing there.

In addition, Israeli laws (which at times begin as bills before the Israeli parliament) have further entrenched Israel’s illegal claim to the city of Jerusalem. As such, the “Basic Law: Jerusalem, Capital of Israel” of 1980, rejected by a UN Security Council Resolution,[5] explicitly defines a united Jerusalem as the Capital of Israel. The Basic Law has been amended, most recently on 2 January 2018, to reaffirm Israel’s sovereignty over Jerusalem and granting Israel the competence to redraw the municipal borders of Jerusalem, to exclude Palestinian neighbourhoods therein and to annex settlements.[6] The approved amendment further indicated that in order to give up sovereignty over any part of Jerusalem, 80 votes are required from the Members of its parliament. The following table (Table 2) provides a non-exhaustive list of Israeli laws targeting Palestinian residents of Jerusalem and the various attempts to domestically legalise Israel’s unlawful annexation of the City:

Meanwhile, international law rejects as a breach, any Israeli sovereignty over Jerusalem and instead has condemned Israel’s measures to alter the demographics and status of the City. Despite Israel’s extensive efforts to create facts on the ground for Jerusalem to become accepted as Israel’s capital, international law rejects it. Although, portraying a weak stance, surrounded by a lacking substantial action to halt Israel’s efforts of annexation and colonisation, numerous UN Resolutions, by both the General Assembly and Security Council, have been issued, yet not necessarily implemented, focusing on Jerusalem, as illustrated in the table below (Table 3):

This document was developed by Community Action Centre (Al-Quds University) and Al-Haq, and is subject to regular updates.

[1] The West Bank, including East Jerusalem, were annexed to Jordan while the Gaza Strip was under the Egyptian administration, with a Palestinian government claiming the sovereignty over all of mandatory Palestine.

[2] “The illegal annexation of East Jerusalem was first brought about by an amendment to the Law and Administrative Ordinance 1948, passed on 27 June 1967, which held that the law, jurisdiction and administration of the state shall extend to any area of Eretz [Land] Israel designated order of the government. On 28 June 1967, the Israeli authorities used this amendment to place 30,000 dunums of the West Bank part of Jerusalem, including its Old City, under Israeli judicial and administrative control. On the same day, and using another amended law, the Israeli Municipality of West Jerusalem extended its borders over those same 30,000 dunums, bringing the Palestinians of East Jerusalem within its jurisdiction. The East Jerusalem Municipality was ordered to cease operations the next day, and Israel completed its annexation under the banner of integration of services.” See Al-Haq, 40 Years after the Unlawful Annexation of East Jerusalem: Consolidation of the Illegal Situation Continues through the Construction of the Jerusalem Light Rail, 12 October 2010, available at: http://alhaq.org/advocacy/topics/wall-and-jerusalem/144-40-years-after-the-unlawful-annexation-of-east-jerusalem-consolidation-of-the-illegal-situation-continues-through-the-construction-of-the-jerusalem-light-rail

[3] Coalition for Jerusalem, Master Plan 2000 – English Translation, 2 May 2007, available at: http://coalitionforjerusalem1.blogspot.com/2007/05/master-plan-2000-english-translation.html [4] The tables provided in this publication were developed by Al-Haq and Community Action Centre (CAC – Al-Quds University) and is expected to be regularly updated.