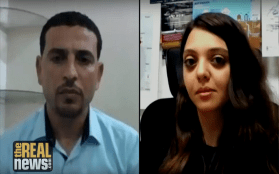 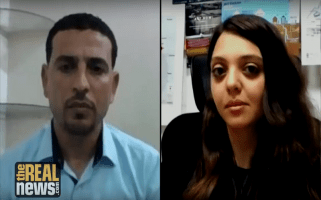 In an interview with the Real News Network, Al-Haq condemned, Wednesday, 25 April 2018, the continued impunity for war crimes committed by the Israeli Occupying Forces (IOF) during the Great Return March. During the interview, the Real News’ Dimitri Lascaris reporting from Montreal, Canada, was joined by Al-Haq’s field researcher in the Gaza Strip, Tareq Zaqqoot, and Al-Haq’s legal researcher, Rania Muhareb, who denounced the unnecessary, intentional, and excessive use of lethal force by the IOF against protected Palestinian civilians, exercising their right of peaceful assembly during the Great Return March.

Tareq Zaqqoot, based in Khan Younis in Gaza, explained that the Great Return March comes as a “result of several factors, which include the suffocating closure imposed on the Gaza Strip and the successive crises as a result of eleven years of imposed blockade.” He highlighted the peaceful nature of the mobilizations and added that “The protesters marched to the border areas to express their demands, their will for and their right of return, in line with United Nations Resolution 194. They consider this an inalienable right, which is yet to be realized.” Speaking from Ramallah, Al-Haq’s legal researcher, Rania Muhareb, noted that Resolution 194 has been reaffirmed over a hundred times since 1948, more than any other resolution in United Nations history, reflecting a longstanding international consensus on the right of Palestinian refugees to return to their homes, cities, and villages of origin.

Discussing Al-Haq’s field documentation of the Great Return March, Tareq Zaqqoot explained that “Since 30 March, the number of Palestinians killed has reached 37. These include four children and two journalists. The second journalist’s death was announced just a few hours ago. The number of injured has reached 2,500. Among them are about 500 children and 100 women. This is in addition to tens of injuries among medical staff and journalists.” Asked about the nature of the injuries documented, Tareq Zaqqoot explained that “The ammunition used has caused the laceration of bones and blood vessels. We have some 28 cases of amputation of limbs as of this moment, among them about four children. The nature of the ammunition used is unknown, although it is causing very serious injury.”

Rania Muhareb further discussed the intentional and deliberate nature of the killings documented by Al-Haq during the Great Return March in Gaza, as evidenced by the nature of the lethal injuries sustained by protesters. She highlighted the precise orders given to Israeli soldiers as supported by statements made by Israeli officials, such as Brigadier-General and former Head of the Southern Command Staff, Zvika Fogel, who in a radio interview on 21 April stated that “It is not the whim of one or the other sniper who identifies the small body of a child now and decides he’ll shoot. Someone marks the target for him”.[1] As a reflection of the widespread culture of impunity within the Israeli establishment, Rania Muhareb commented on the quote saying “we are dealing with premeditated intentional use of force and a shoot-to-kill policy that we at Al-Haq have been documenting for decades, which means that Israel’s response to the Great March of Return is none other than an intentional commission of wilful killings and war crimes”.

She concluded that Al-Haq and partner organizations Al Mezan and the Palestinian Center for Human Rights in Gaza have made a submission to the International Criminal Court (ICC) alleging the commission of war crimes by the IOF during the Great Return March, urging the Court to open an investigation into the situation in Palestine in an effort to bring to an end Israel’s longstanding impunity for crimes committed in the Occupied Palestinian Territory.