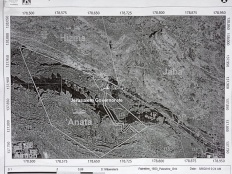 The Palestinian town of ‘Anata is located approximately four kilometers northeast of the city of Jerusalem, and is separated from the adjacent Israeli military camp of Anatot by the Annexation Wall, which contains two watchtowers with military presence therein.[1] ‘Anata is located in the Jerusalem Governorate and comes under the jurisdiction of the Israeli Jerusalem Municipality, but is fragmented with part of the town separated by the Annexation Wall. This has left Palestinian residents with Jerusalem ID’s, on the West Bank side of the Annexation Wall, in a municipal vacuum, where the Jerusalem Municipality refuses to provide services, in violation of Israel’s obligations as Occupying Power under Article 43 of the Hague Regulations, and where the Palestinian Authority is prevented from applying its jurisdiction, under the Oslo Accords.

During the British mandate, an agreement was concluded to supply the waters from ‘Ein Fara spring free of charge to the villages of ‘Anata, Hizma and Jaba’. In 1941, the High Commissioner of the British Mandate of Palestine, Harold MacMichael introduced the Law of ‘Ein Fara, into the Jerusalem municipality. In particular, Article 3 provides that people from the area have the right to use the water from the spring of ‘Ein Fara for their personal use or for their animals, free of charge.[3] The water was piped from the spring of ‘Ein Fara to three water stations and was the main source of drinking and agricultural water for the villages of ‘Anata, Hizma and Jaba’ until 1968, when Israel shut down the pumping station and supplied water instead from the Hagihon Company Ltd., concerned with water and wastewater utility in Jerusalem.[4] The Hagihon Company was founded in 1996 by the Israeli Jerusalem Municipality, as an independent corporation, authorized by the Israeli Water and Sewage Corporations Law, and then became “officially” independent from the Municipality.[5]

In 1983, the Jerusalem Municipality ended the supply of free water to the villages, without offering any reasons. Today, the Palestinian villagers depend on rain water to cultivate crops and for this reason, much of the cultivable lands in ‘Anata, Hizma and Jaba’ are not used, due to lack of water supply in the arid summer and autumn months. Previously, the ‘Ein Fara spring supplied year round water, to support agriculture and Palestinian livelihoods. The water now supplied to Palestinian villagers from ‘Anata, Hizma and Jaba’ is from the Yarkon Springs north of Tel Aviv. Villagers on the West Bank side of the Wall, pay the Hagihon company for the water supplied from the Yarkon Spring, through a coordinating arrangement with the Palestinian Authority. The water is considered by the villagers to be of an inferior quality with locals reporting the poorer quality taste of both the water and animal products (meat and milk) from herds deprived of wandering the nature reserve area and drinking from fresh, free and clean water resources.[6]

[2] (8 dunums on the stream and 8 dunums around the stream, 33 dunums belonging to the Orthodox Church, with the remaining land comprising village lands). Documents and testimonies on file with Al-Haq.

[3] Documents on File with Al-Haq