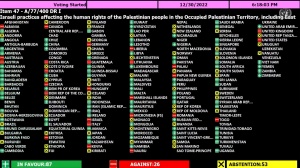 In a historic plenary vote, the UN General Assembly voted in favour of submitting a question for an Advisory Opinion on the Question of Palestine to the International Court of Justice. Al-Haq extends its deepest appreciation to the 87 Member States who aligned with the calls of the Palestinian people and voted in favour of submitting the question for an Advisory Opinion. It is critical that the avenues of justice and rule of law are opened by Third States for the Palestinian people, who have been systematically disenfranchised and denied their inalienable right to self-determination, as well as subjected to grave breaches of jus cogens norms, which incur erga omnes obligations. The Advisory Opinion offers a critically important opportunity for the International Court of Justice to examine the legality of the occupation regime, which if found in breach of international law, may incur, for the first time, important legal obligations on Third States and the international community, to bring the occupation to an end.

Prior to the vote, on 17 December, Al-Haq as a member of the Palestinian Human Rights Organisations Council (PHROC) sent letters to all Member States who had previously voted on the draft resolution at the Special Political and Decolonization Committee (Fourth Committee). Representing the leading Palestinian human rights organisations, PHROC advocated for Third State’s continued full support stating: “in light of the failure of Third States to intervene to bring the illegal situation to an end, it is time for a fresh examination of the legal consequences that arise from an ever entrenching and obviously permanent occupation. It is time for the Court to examine the jus ad bellum necessity and proportionality of Israel’s decades long occupation, now passing the half century mark, and the systematic denial of the inalienable human rights of the Palestinian people”.

Numerous General Assembly resolutions between 1977 and 1980 contained a preambular provision expressing deep concern “that the Arab territories occupied since 1967 have continued, for more than ten years, to be under illegal Israeli occupation and that the Palestinian people, after three decades, are still deprived of the exercise of their inalienable national rights”. More recently in its September 2020 report, the UN Commission of Inquiry provided “two indicators that may be used to determine the illegality of the occupation: the permanence of the Israeli occupation… and actions amounting to annexation, including unilateral actions taken to dispose of parts of the Occupied Palestinian Territory as if Israel held sovereignty over it”.

Further a number of prominent UN experts have warned that Israel’s occupation has crossed the red line into illegality including UN Special Rapporteur Michael Lynk, who proffered a four point test for determining the illegality of an occupation, and UN Special Rapporteur Francesca Albanese who demanded “an immediate end to the illegal Israeli occupation”. While in 2007, then UN Special Rapporteur John Dugard questioned: “[w]hat are the legal consequences of a regime of prolonged occupation with features of colonialism and apartheid for the occupied people, the occupying Power and third States?”. Likewise, UN Special Rapporteur Richard Falk, in his authoritative final report recommended that “the General Assembly request the International Court of Justice to issue an advisory opinion on the legal status of the prolonged occupation of Palestine, as aggravated by prohibited transfers of large numbers of persons from the occupying Power and the imposition of a dual and discriminatory administrative and legal system”.

As Israel’s incoming Prime Minister Netanyahu promised that the government would, “promote and develop settlement in all parts of the Land of Israel – in the Negev, the Golan, Judea and Samaria”, it is not only urgent that that International Court of Justice provides this critical legal opinion, for Palestine, it is existential. It is therefore imperative that Third States now fully commit to the legal process at the International Court of Justice and work towards advancing the calls of the Palestinian people, for full self-determination and freedom from Israel’s settler colonial apartheid rule, and the ending of the permanent annexationist military administration, masquerading as a belligerent occupation.