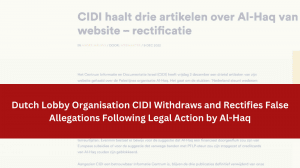 The Center for Information and Documentation Israel (CIDI), a lobby organisation in the Netherlands, has withdrawn its false allegations against Al-Haq. CIDI acted after Al-Haq had legally summoned the organization to remove three defamatory articles from its website and to publish a rectification.

On 28 November 2022, Al-Haq’s lawyer Brechtje Vossenberg, affiliated with the reputable law firm Prakken d'Oliveira Human Rights Lawyers in Amsterdam, delivered a liability notice to CIDI summoning it to withdraw and rectify three articles it had published in May and June 2022. These articles were riddled with factual mistakes and false and unsubstantiated allegations harming Al-Haq’s reputation and work in defending and promoting the human rights of the Palestinian people.

‘Al-Haq had summoned CIDI to remove and rectify those articles because they contained factual inaccuracies and would be damaging to the organization’s good name. CIDI complies with this demand. Indeed, CIDI’s own further investigation revealed that the articles in question falsely give the impression that Al-Haq has extensive ties to Palestinian terror groups and is part of the Popular Front for the Liberation of Palestine (PFLP). There is insufficient evidence for these allegations. It is also falsely claimed that Al-Haq is on multiple international terror lists; it is only on Israeli terror lists. Nor is there evidence for the suggestion that Al-Haq is a financial conduit for European funding or for the suggestion that, because of ties to PFLP, funding was stopped or credit cards were blocked.’

Al-Haq acknowledges the steps taken by CIDI in response to the liability notice, but notes that the rectification does not address all inaccuracies and false allegations contained in the three articles CIDI has now withdrawn. In the present circumstances, however, Al-Haq sees no reason to take further civil legal action against CIDI.

Al-Haq considers the removed and rectified articles as part of a smear campaign launched to undermine its vital human rights work and Palestinian civil society more broadly, as we collectively work to promote accountability and challenge Israel’s settler colonial and apartheid practices and policies towards the Palestinian people. CIDI’s retraction is an important result in Al-Haq’s principled efforts to counter smear campaigns and pursue accountability.

However, CIDI’s removals and rectification do not undo the damage the defamatory articles have already done to Al-Haq since their publication and promotion by CIDI in May and June 2022. Al-Haq believes that CIDI must be held accountable for the harm it has done and therefore maintains the criminal complaint filed against CIDI on 28 November 2022.