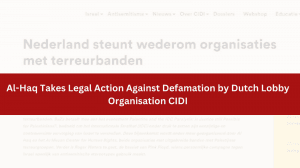 Today, on 28 November 2022, Al-Haq has taken legal action against the Center for Information and Documentation Israel (CIDI), a lobby organisation in the Netherlands. Based on a close review of content published by CIDI, Al-Haq cannot but conclude that CIDI is an organisation that shields Israeli government policies and is hostile towards Palestinian civil society organisations.

Al-Haq has decided to take legal action based on Article 6:162 of the Dutch Civil Code and Articles 261 and 262 of the Dutch Penal Code, in order to hold CIDI accountable for slander and libel (“laster en smaad” in Dutch) in three articles published on CIDI’s website in May and June 2022. This legal action consists of two steps, which are clarified below: (1) a liability notice summoning CIDI to withdraw and rectify the three articles, delivered today to CIDI in parallel to (2) a criminal complaint that Al-Haq and its General Director Shawan Jabarin have filed at the Dutch Public Prosecutor’s Office.

In a recent review of CIDI's website, Al-Haq found dozens of articles published by CIDI during the past years, which Al-Haq perceives as inciting against Palestinian civil society organizations and as delegitimizing their vital work of defending human rights and holding Israel accountable for grave and systematic violations of international law, including war crimes and crimes against humanity. It is Al-Haq’s view that in acting this way, CIDI has effectively been amplifying and aiding the aggressive Israeli government-led campaign aimed at undermining and silencing Palestinian civil society and human rights defenders.

In May and June 2022, CIDI published three slanderous articles attempting to tarnish Al-Haq’s professional reputation. Al-Haq is a leading and internationally respected human rights organization, as also reflected in prestigious human rights prizes awarded to Al-Haq, such as the Human Rights Award of the French Republic (December 2018) and the Bruno Kreisky Prize (June 2022).

Apart from containing numerous defamatory allegations, these articles by CIDI were riddled with serious factual errors. CIDI’s main allegations centre around erroneous and unsubstantiated claims that Al-Haq is involved in terrorism – a grave accusation, legally comparable to complicity in murder.

The articles which prompted Al-Haq to take legal action were published by CIDI on 17 May 2022 (‘Netherlands again supports organizations with terror ties’), 20 May 2022 (‘Ministers silent about external investigation UAWC’) and 15 June 2022 (‘MFA considers Al Haq 'civil society’’). They were written by the same author, identified on CIDI’s website as “J F”. All three articles were promoted on CIDI’s social media accounts.

In September 2022, Al-Haq learned about these articles and their unlawful and harmful content. To challenge the defamatory allegations and factual misrepresentations contained in them, Al-Haq commissioned Dutch lawyer Brechtje Vossenberg to launch two legal steps. Ms. Vossenberg is affiliated with the reputable law firm Prakken d'Oliveira Human Rights Lawyers, based in Amsterdam.

The first legal step is a liability notice, which Ms. Vossenberg sent today to CIDI. The notice addresses CIDI’s defamatory allegations and factual errors in the above-mentioned articles and lays out why and how these articles harm Al-Haq’s integrity and reputation in the Netherlands and possibly beyond. Concluding CIDI’s statements are unlawful and harmful to Al-Haq, CIDI is summoned to remove the three articles from its website and social media platforms within 7 days, that is no later than 5 December 2022. Additionally, CIDI is summoned ‘to publish clear rectifications by which CIDI retracts the identified factual inaccuracies and unsubstantiated assertions, which harm [Al-Haq’s] good reputation’.

The second legal step is a criminal complaint (“aangifte” in Dutch), which Ms. Vossenberg filed today at the Office of the Dutch Public Prosecutor. This complaint was filed due to the severity of CIDI’s false allegations and the harm already done to Al-Haq’s reputation, in particular in the Netherlands. The criminal complaint is directed against CIDI and the author “J F” of the above-mentioned articles. It has been filed on behalf of Al-Haq and its General Director, Shawan Jabarin, requesting the Public Prosecutor to launch a criminal investigation into CIDI’s statements and to prosecute CIDI for its defamation and the harm done by its articles.

Among CIDI’s slanderous and erroneous allegations are unsubstantiated claims that Al-Haq has ‘extensive ties to Palestinian terror groups’ and that it ‘is on various terror lists, including in the EU’, notably ‘as a fundraising mechanism for the Popular Front for the Liberation of Palestine’ (PFLP). CIDI doesn't offer a shred of evidence for such (financial) ties, which do not exist.

These allegations by CIDI resemble Israel’s escalating attack against Al-Haq and five other Palestinian civil society and human rights organizations criminalized by Israel in October 2021, launched to entrench Israel’s settler colonial apartheid regime against the Palestinian people. In July 2022, nine EU member states, including the Netherlands, jointly rejected this criminalization and reaffirmed their “cooperation and strong support” for Palestinian civil society. In doing so, they effectively dismissed the very allegations made by Israel, which CIDI has been echoing and amplifying in its publications. In August 2022, after the Israeli army raided and closed the offices of seven Palestinian NGOs, including Al-Haq’s, the nine EU member states denounced these actions as “not acceptable” and stressed they “stand firm with [Palestinian] NGOs to uphold the right to freedom of expression and association in the occupied Palestinian territory”.

Another example of CIDI’s attempt to frame Al-Haq as an organization linked to terrorism, is its false claim that the EU ended its funding for Al-Haq ‘when the extensive ties between Al Haq and the PFLP came to light’. In reality, however, the EU never drew that conclusion nor cited that reason for its temporary suspension of Al-Haq’s funding, which it had imposed in 2021 based on Israeli allegations. When lifting this suspension in June 2022, the EU concluded ‘no suspicions of irregularities and/or fraud affecting EU funds’ had been found in relation to Al-Haq’s EU-funded project.

Furthermore, CIDI wrongly claims ‘credit card companies Visa, American Express and Mastercard have been blocking all payments to Al Haq since May 2018, after they signalled (financial) ties to the PFLP’. Even more so, CIDI falsely claims that these companies ‘classify Al Haq as a terrorist organization’. Such classifications don’t exist, nor did these companies terminate their financial services to Al-Haq – if only because Al-Haq wasn’t receiving such services.

In a further distortion of reality, CIDI also claims ‘Al-Haq was founded by PFLP commander Shawan Jabarin’. While Shawan Jabarin is Al-Haq’s current General Director, he didn’t establish the organization. More importantly, CIDI’s claim that Jabarin is or was a ‘PFLP commander’ is a shocking example of toxic defamation. Additionally, CIDI accuses Al-Haq’s ‘chairperson’ of links to the PFLP. However, the person referenced by CIDI is not even affiliated with Al-Haq – a clear-cut case of mistaken identity, which CIDI could have easily prevented had it bothered to visit Al-Haq’s website.

Last but not least, CIDI’s attempt should be noted to further tarnish Al-Haq’s reputation through the use of terrifying photos accompanying its articles. In two of the articles, CIDI included photos implying Al-Haq can be associated with armed groups blacklisted by the EU. In Al-Haq’s view, this editorial choice by itself testifies to CIDI’s deliberate intention and efforts to severely harm Al-Haq’s reputation and credibility in the Netherlands and beyond.

It is Al-Haq's convinction that CIDI, by resorting to slanderous statements and factual errors such as those referenced above, makes a mockery of its self-proclaimed status as a reliable and competent resource centre servicing the Dutch parliament, media, educational sector and public at large. While the contested publications reveal in Al-Haq’s view that CIDI falls far short of this status, the perception CIDI enjoys among relevant target audiences increases the harm done to Al-Haq – visitors and followers of CIDI's website and social media may take its allegations against Al-Haq for granted.

Accordingly, Al-Haq has decided to draw a red line and hold CIDI legally accountable for its unlawful and harmful behaviour. In recent years, we have defied the Israeli government efforts to shut down Al-Haq and silence us, which we will continue to do. In the same spirit, we will not be silenced by groups that smear us to disrupt our principled human rights work.

If CIDI doesn’t remove and rectify the three contested articles within 7 days, Al-Haq is prepared to take further legal steps to defend its credibility, integrity and work promoting and protecting the human rights of the Palestinian people.