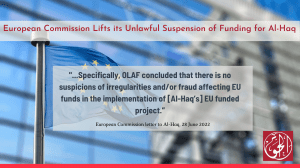 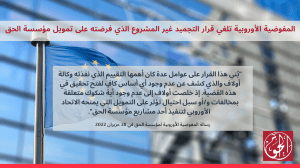 On 28 June 2022, more than 13 months after it had imposed an arbitrary suspension of funding on Al-Haq’s EU-funded project, the European Commission finally lifted this disgraceful suspension, which was unlawful from the start and based on Israeli propaganda and disinformation.

The suspension has been lifted unconditionally and with immediate effect. In its official letter to Al-Haq, it clarified:

“This decision is based on several elements including OLAF’s assessment, who did not find sufficient ground to open an investigation. Specifically, OLAF concluded that there is no suspicions of irregularities and/or fraud affecting EU funds in the implementation of [Al-Haq’s] EU funded project.”

As explained in our statement on 21 January 2022, the absence of indications of fraud or other irregularities had already been established by the Commission in July 2021, following a financial audit of Al-Haq’s project, which promotes the implementation of international rights instruments Palestine has acceded to. The latest assessment of the EU’s anti-fraud agency OLAF only confirms this conclusion.

Since its imposition in May 2021, it was clear that the suspension was not prompted by any genuine concerns about the possible misuse of funding. Under the direct responsibility of the Hungarian EU Commissioner Olivér Várhelyi, the suspension became a political initiative aimed at giving the Israeli government a tailwind in its attempts to disrupt and defame Palestinian civil society and to oppress the voices of Palestinian human rights organizations and defenders. Based on what we have experienced with this suspension in the past 13 months, no other conclusion can be drawn.

Due to our human rights work to hold Israel accountable for its grave and systematic violations against the Palestinian people, Al-Haq has been a long-time target of smear campaigns,  intimidation and reprisals, including death threats. These tactics have been deployed to distract Al-Haq and to divert its resources from its core mission to promote human rights and accountability – in order to enable Israel to entrench its settler-colonial and apartheid regime in Palestine and against the Palestinian people as a whole.

We have no illusions about Israel’s escalating campaign to shrink civic space for human rights organizations and its attempt to silence human rights defenders in Palestine, the culmination of which was Israel’s decision in October 2021 to designate Al-Haq alongside five other leading Palestinian NGOs.

However, when a rule-based actor like the EU effectively aligns itself with such a toxic campaign, a red line is crossed. This is what happened when the Commission suspended Al-Haq’s funding without any grounds, transparency and accountability and in violation of our rights. Instead of defending us, the Commission abandoned us, thereby worsening our vulnerability.

Throughout 2021, the Commission consistently ignored our questions and requests. In early 2022, we therefore appointed a Belgian lawyer to defend our rights vis-à-vis the Commission. On 1 April 2022, he launched a procedure for “amicable settlement” on our behalf, including our proposal on how the dispute between the parties should be resolved.

In violation of its contractual obligations and despite our repeated requests, the Commission has failed to respond to our proposal. In fact, it failed to present its own proposal based on a timetable it had suggested. This only confirms the Commission has been acting in bad faith, including through endless delaying tactics.

At that point, we drew a line and decided to legally challenge the suspension by taking the Commission to court for its ongoing violations of Al-Haq’s rights and the harm resulting from that, which has been exploited by the Israeli government and groups affiliated with it. On 16 June 2022, our lawyer handed the subpoena to a bailiff, who submitted it to the Commission. The first court session at a Brussels court of First Instance has been scheduled for 4 July 2022.

For decades, Al-Haq has been working on protecting the rights of the Palestinian people against international law violations committed by Israel and other perpetrators. The suspension amounts to another violation. We will continue promoting accountability and upholding the rule of law.

In our interaction with the Commission, we have requested assurances regarding the Commission’s commitment to execute the remainder of the project in good faith, ruling out any further politically-motivated disruptions based on slanderous allegations against Al-Haq.

We are glad to see the suspension of our funding being lifted and value our partnership with the EU, which we want to continue in good faith, despite the Commission’s mistakes and misconduct. In that regard, it is essential that this disgraceful episode will not be repeated.

In between these turbulences, Al-Haq recently received the prestigious Bruno Kreisky Prize for Services to Human Rights. Read our statement on the occasion of the award ceremony on 23 June 2022 here.