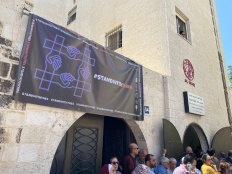 During the early morning hours of 18 August 2022, at approximately 3:00 am, Israeli Occupying Forces (IOF) entered Ramallah, targeting, forcibly entering, raiding the offices and confiscating property from the six designated Palestinian civil society organisations, Al-Haq, Addameer, the Bisan Center for Research & Development, Defence for Children International-Palestine, Union of Agricultural Workers Committees (UAWC), and the Union of Palestinian Women’s Committees (UPWC). The IOF also raided the offices of the Health Workers Committees. The incursion, raids, pillage and closures, are the latest in a pattern of repressive attacks by Israel, targeting Palestinian civil society organisations who advocate for human rights and international rule of law, and call for an end to Israel’s aggressive 74-year colonial and apartheid regime, that denies the collective right to self-determination of the Palestinian people and the right of refugees to return.

On 19 October 2021, Israel designated six leading Palestinian human rights organizations as “terrorist” groups under its Counter Terrorism Law, 2016. The designation was given effect in the occupied Palestinian territory (OPT), on 3 November under a military order, declaring the organisations as unlawful associations under Regulation 84(1)(b) of the Defense (Emergency) Regulations of 1945. The military order declares that  “every member of the institution ‘Al-Haq Institution’ or ‘Al-Haq’…is an illegal organization in the meaning of the defense regulations.” Following yesterday’s decision by Benny Gantz, the military order has taken full effect in the OPT, whereupon Yehuda Fox, the Israeli military commander, led an armed incursion into Ramallah to forcibly close the six organisations, in an attempt to quash the work of human rights defenders, in serious violation of the right to freedom of expression and association. Such orders infringe upon and overreach into the work of human rights organisations and civil society, exceeding the competence of the military commander under Article 43 of the Hague Regulations (1907), in addition to violating fundamental humanitarian rights guarantees of protected persons under Article 27 of the Fourth Geneva Convention (1949).

At 3:23 am, Israeli Occupying Forces (IOF) forcibly blasted through the locked security door of Al-Haq’s offices, bursting the door from its hinges and raiding the premises, setting off the alarms. Below the premises of Al-Haq, the IOF bludgeoned and broke the front door of the Episcopal Church, leaving long shards of exposed broken glass, sponge-grenades, and several teargas canisters, rubber coated and live bullets around the property. Armed military forces broke into Al-Haq, systematically raiding each room and blasting the hinges off the locked doors of the finance department, the administrative office, the General Director’s office, and the main server room, causing material damage. The military rummaged through files, scattered and displaced accounting folders to the ground, knocked over coffee cups leaving spillages, and trashed offices, and trashed and bathrooms.

In Al-Haq’s meeting room, raiding soldiers tore an Irish flag to the ground, which had been symbolically placed in recognition of the Occupied Territories Bill, prohibiting the import of settlement goods and services. In addition, the IOF tore down large maps of 1948 Palestine, maps which depict an unfragmented Palestine, free from the tyranny of settler colonialism and apartheid and the infliction of international crimes. The IOF also removed from the wall at reception, the framed certificate of the prestigious Geuzenpenning Prize for Human Rights Defenders, awarded to Al-Haq in 2010, for Al-Haq’s commitment and excellence in documenting and monitoring Israel’s widespread and systematic violations of human rights against the Palestinian people.

After raiding and rampaging through Al-Haq’s offices, the IOF welded a new reinforced iron door to the outside of Al-Haq’s office, completely sealing off the office and preventing any entry, attaching, alongside it, a military order, and another copy of the order on the main entrance door. The military order states that, under Article 319 of the Emergency Regulations, of 1945, and following the declaration on 3 November 2021 of Al-Haq as an unlawful association, the Israeli military commander orders the closure of Al-Haq’s offices for the safety and security of the area, the IOF and public order. The military order further warned that “those administering the organisation, must shut down the organisation, refrain from managing it and keep it shut, from the moment of receipt of this order”. According to the military order, Al-Haq's office is considered to be illegal or is used to conduct activities that are considered illegal.

In raising this urgent alert, Al-Haq calls on the international community to immediately intervene to protect the six designated organisations, whose finances and assets risk being confiscated, and their staff members, directly targeted, arbitrarily arrested and imprisoned. Al-Haq warns that, in targeting the Palestinian civil society organisations, Israel is dismantling the very fabric of the Palestinian society, and systematically removing the critically vital monitoring and oversight institutions, necessary for a viable and functioning society based on the principles of democracy, human rights and the rule of law.

In view of the above, Al-Haq urges the international community to take concrete actions, including: