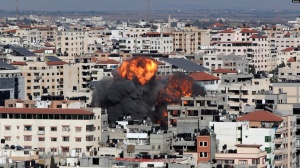 On Friday, 5 August 2022, Israel launched an attack on the occupied Gaza Strip, killing 14 Palestinians, including five-year-old Alaa Qaddoum, and wounding 125 Palestinians.[1] Following its bombing of a 14-story apartment building in the Palestinian neighborhood of Al-Rimal, which injured several civilians and damaged nearby structures, Israel indiscriminately targeted several Palestinian homes and agricultural lands within Gaza, employing excessive force including missiles and artillery shells. Al-Haq warns that Israel’s aggressive attacks on the Gaza Strip disproportionally affecting the civilian population, are excessive in relation to the concrete and direct military advantage anticipated, and may amount to war crimes. Al-Haq calls upon the UN Security Council, UN members states, and the international community to take immediate measures and use all necessary means to cease Israel’s attacks against the protected occupied population in Gaza.

That Israel intends to further escalate its aggressive use of force against the Gaza Strip is evident from the statements of senior Israeli politicians. Israeli Defense Minister, Benny Gantz, has approved a draft order of up to 25,000 soldiers for operations in and around Gaza and has begun calling upon its reservists in preparation for the escalation of violence in the Gaza Strip. The Israeli Prime Minister, Yair Lapid, announced that Israel's military operation against the Gaza Strip "will take as long as it needs," stating that the government’s priority is the “elimination of a concrete threat against the citizens of Israel” and that “[a]nyone who needs to be arrested will be arrested.” The statements are further reminiscent of Israel’s incitement to aggression leading to hostilities in Gaza in May 2021, and the escalation in Jerusalem in April 2022, which were the subject of Al-Haq letters to this Council.

Al-Haq strongly condemns Israel’s military incursion and aggressive attacks in the occupied Gaza Strip, as well as its continued illegal blockade and use of collective punishment against Palestinians in the occupied Gaza Strip. In the days preceding the attack, Israeli authorities closed all crossings into Gaza, restricting the movement of Palestinians, as well as inhibiting the flow of fuel to Gaza’s sole power plant, impacting the delivery of vital electricity resources to more two million people in the Gaza Strip.

This Council, charged with the maintenance of international peace and security, must fulfil its mandate by immediately intervening, with all necessary measures, to halt Israel’s indiscriminate and excessive attacks on Gaza, ensure the provision of vital humanitarian supplies and prevent further killings of the protected Palestinian population in Gaza.

Specifically, Al-Haq calls on the UN Security Council to:

[1] Field documentation on file with Al-Haq. Preliminary figures initially sourced from the Palestinian Ministry of Health, while Al-Haq carries out field investigations. These statistics may increase as Al-Haq continues to collect further information as the escalation develops. Figures as of 15:35 on 6 August 2022.