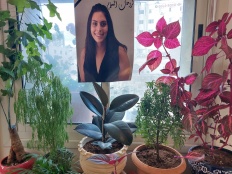 Today, 11 July 2022 marks one year since the sad and untimely death of Suha Jarrar, 30, Al-Haq’s Senior Legal Researcher and Advocacy Officer, a year which has left in its wake, a deep painful harbour of collective grief and mourning for our beautiful friend and colleague. We particularly extend our thoughts today to Suha’s parents, Khalida, Ghassan and sister Yaffa.

Suha’s sensitive and empathetic nature pierced deep into her work interests and she was driven by a reaching and expansive concern for the victims of all human rights violations. While she spearheaded Al-Haq’s advocacy work on prisoner’s rights, women’s rights, and other marginalized groups rights, she also laid the research foundations for an entire field on environmental law and climate change at Al-Haq.

Her last substantive pieces of work included webinars on “Shrinking Space in Area C” in January 2021, and on “the Conflictual Legacy of Palestinian Women” in her Earth Day Lecture on environmental justice in Palestine to the University of Georgia's Students in the US, in April. Speaking to the students about the impacts of Israel’s egregious arbitrary arrests and administrative detention on women, on baseless and unsubstantiated “secret evidence”, Suha explained that:

“Palestinian women detainees represent all facets of the Palestinian society. They include parliamentarians, leaders, journalists, social workers, mothers and healthcare service providers.  Between 1967-2020 more than 10,000 Palestinians women were jailed by the Israeli authorities for their involvement in Palestinian resistance.”

The cruelty of Israel’s arbitrary administrative detentions, ripped deep into the fabric of Suha’s family and home life. For much of Suha’s adult life, her mother, Khalida, a respected and prominent feminist and parliamentarian in the Palestinian Legislative Council, was persecuted and incarcerated by the Israeli military for her peaceful political activism. When Suha passed away suddenly, Khalida, who only had one month left of an administrative detention term, was denied humanitarian release to attend her daughter’s funeral, despite the interventions of the ICRC, and Third State representatives.

Deeply influenced by her mother’s work, Suha cautioned that the broader collective realization of the Palestinian right to self-determination and the dismantling of Israel’s apartheid regime must not be sacrificed on the altar of feminist rights, rather that the rights must be understood together as indivisible and interrelated. Suha said:

“Whenever we are invited or asked to be part of a panel, to talk about women, the conversation naturally kind of diverts away from the efforts to end the apartheid regime and the occupation. And this is something that is really important to keep in mind, because this is at the center of our struggle. And it reminds me of one thing that my Mum always says. She tells me that there is absolutely no full liberation without liberation from the occupation, and vice versa. Also we cannot be liberated without being liberated inside, internally as well. But the occupation at this moment and the apartheid regime, is the priority to be liberated from. And that doesn’t negate the fact that we need to be liberated also as feminists”.

Reflecting on the tools for a future Palestine, Suha questioned:

“Where is the leadership going to come from? The same place that any leadership, in any place comes from. Through an elected democratic process and through allowing that democratic process to actually take place. … We have a unified vision. We don’t have effective leadership…. As of now… at least…allowing a generation like mine to choose their leadership… even that is not available right now. I think that would be a starting point.”

Suha’s commitment to human rights and the realisation of the right of the Palestinian people for self-determination lives on through her work, and her ethos and spirit is carried in the continued commitment to advocacy and human rights of the Al-Haq team.

May she rest in peace and in power.

Watch Al-Haq’s video tribute to the work of the late Suha Jarrar.

Suha Jarrar, Unpacking Gender in Coercive Environments: The Case of the Jordan Valley

Suha Jarrar, The Struggle for Self-Determination in the Face of Climate Change

Suha Jarrar, No Justice, No Adaptation: The politics of climate change adaptation in Palestine"

Suha Jarrar, The Israeli Occupation is alive and well under COVID-19 lockdown (Mondoweiss)

Suha Jarrar, Palestine Civil Societies Inaugural Submission to Convention on the Elimination of Discrimination Against Women

Suha Jarrar, Al-Haq Meets with the United Nations Special Rapporteur on the Human Rights to Safe Drinking Water and Sanitation