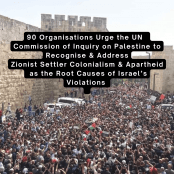 On 31 May 2022, Al-Haq and 90 Palestinian and international organisations sent a joint submission to the United Nations Independent International Commission of Inquiry on Palestine (CoI) examining Zionist settler colonialism and apartheid as the root causes of Israel’s ongoing violations of the inalienable rights of the Palestinian people. The joint submission comes in response to the unique mandate entrusted with the ongoing CoI established in May 2021, which is the first investigating UN body to examine the underlying root causes of systematic discrimination and repression in the entirety of colonised Palestine; allowing for the acknowledgment that Israeli violations in Palestine are rooted in a historical and an ongoing settler colonial project, and for the consideration of the Palestinian people and territory as a self-determination unit, instead of a fragmented people and territory.

The submitting organisations acknowledge that the CoI’s unique mandate, is mainly attributed to the Palestinian people on the ground, who, in May 2021 mobilized in a collective struggle of popular resistance. This popular resistance challenges 73 years of fragmentation, imposed by Israeli settler colonisation and apartheid in what is known as the Unity Intifada/Uprising.

Before delving into the Zionist settler colonial and apartheid regime as the root causes of Israel’s ongoing violation, the submission explains the necessity behind this framing, instead of the hegemonic narrative around Palestine, that still portrays the situation as the “Israeli-Palestinian conflict” which is centred ‘only’ on Israel’s occupation since 1967. Adopting the settler colonialism and apartheid framework allows for consideration of the plight of the Palestinian people in its entirety. This shifts the discourse from a focus on so-called political solutions to a struggle for self-determination, aimed at dismantling Israel’s regime of settler colonialism, rather than seeking “reforms” to living conditions under the reign of Zionism, or “liberal equality”.

The joint submission then delves into the history of the Zionist settler colonial movement, in order to understand the Israeli settler state as a product of this movement. The submission addresses the Zionist movement’s emergence by the end of the 19th century, and how the Movement adopted the combined ideologies of racialist self-identification of persons of Jewish faith and settler colonialism, which involves the elimination of the indigenous people and the annexation of their lands to the benefit of the newly constructed colonising racial group.

The organisations outline how the Zionist movement used a proto-state apparatus, and colluded with imperial powers “to create for the Jewish people a home in Palestine secured by public law.” The submission outlines Britain’s illegal role in facilitating Zionist colonisation in Palestine, in violation of the Legal of Nations Covenant, which provides for the provisional recognition of the Palestinian people independence, and their right to self-determination, and in violation of the Mandatory Power’s obligation to administer the territory in the interest of the indigenous Palestinian people.

The submission then delves into Israel’s apartheid regime, by examining the series of laws and policies Israel has developed since its establishment, particularly in the domains of land, planning and zoning, nationality, residency, and immigration, clearly dividing between the indigenous Palestinian people and Jewish Israelis, in order to legalize and legitimize crimes committed before the Nakba, and ensure the continuation of displacement and dispossession. The submission explains how these apartheid policies and plans continue after the belligerent occupation, to maintain the domination and Palestinian subjugation on both sides of the Green Line.

The submission then examines Israel’s strategic fragmentation of the Palestinian people as a tool to consolidate its apartheid regime, through the denial of Palestinian refugee their right to return, the imposition of freedom of movement, residency, and access restrictions, and the denial of family life. The submission explores Israel’s intention to maintain its apartheid regime by suppressing Palestinian resistance through its military rule, wilful killing, suppression of demonstrations, arbitrary detention, torture and other ill-treatment, and collective punishment, as well as smear campaigns against groups, and human rights defenders, seeking to challenge its apartheid regime.

In conclusion, the organisations address Israel’s impunity and the role of the international community in enabling the colonisation of Palestine. The organisations commend the CoI as a promising opportunity toward the acknowledgement of the situation in colonised Palestine as is and to work toward decolonisation, genuine justice and reparations for the Palestinian people.

To read the full submission and the list of endorsing organisations, see here.