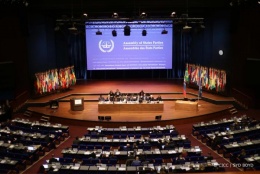 On 8 December 2021, Al-Haq delivered a joint statement on behalf the Palestinian Centre for Human Rights and Al Mezan Center for Human Rights, during the General Debate of the 20th session of the Assembly of States Parties (ASP) to the Rome Statute of the International Criminal Court (ICC). The statement addressed the Israeli occupying authorities’ designations of the six leading Palestinian civil society organisations as “terrorist organisations”, as inhuman acts amounting to the crime of apartheid, within the jurisdiction of the Court. The six organizations include, Al-Haq, Addameer Prisoner Support and Human Rights Association, Bisan Center for Research and Development, Defence for Children International-Palestine, the Union of Agricultural Work Committees, and the Union of Palestinian Women’s Committees.

The statement clarified that the decision to label the six organisations as “terrorist” comes as the “culmination of years-long orchestrated campaign that aims at silencing human rights defenders.” It further showed that the tactics used in this campaign include “several intimidation and harassment methods, such as smearing campaigns, attempts to dry financial resources, targeting with notorious Pegasus spyware, and even death threats.” The statement added that Israel’s targeting of the six organisations is primarily because of the organisations’, “long-lasting constructive engagement with the ICC”. It further confirmed that through these designations Israel, the Occupying Power, “aspires to hinder the work of the ICC by depriving it of one of its main sources of information, evidence and supporting analysis”.

Further, the statement reminded the ASP that the Former ICC Prosecutor, Fatou Bensouda, had acknowledged in her 2016 report on the preliminary examination that “staff members of certain organisations that have gathered information of relevance to the Office of the Prosecutor’s preliminary examination, such as Al-Haq and Al Mezan, have been subjected to threats and other apparent acts of intimidation and interference.” Notably, According to Article 70 of the Rome Statute, such acts of “tampering with or interfering with the collection of evidence”, when committed at the trial stage, for example, amount to “offences against the administration of justice.”

The statement reiterated that Israel’s unsubstantiated designations are a clear attempt by an Apartheid regime to conceal its crimes and to prevent the ICC from acquiring the information and evidence that have been collected by Palestinian human rights organisations. Notably, the Apartheid Convention lists “Persecution of organizations and persons by depriving them of fundamental rights and freedoms, because they oppose apartheid” as one of the acts of apartheid. The statement urged the Office of the Prosecutor to therefore, “expedite its investigation in the Situation in Palestine, including of the evident crimes against humanity of apartheid and persecution.”

It further asserted that the ASP has a unique responsibility to address the Israeli baseless designations of Palestinian organisations. It urged state parties to “act swiftly and decisively to protect human rights defenders in Palestine.” It further called of the ASP and its States Parties to “boldly and unequivocally condemn Israel’s designation.” Moreover, the statement proclaimed that the silence of the Assembly and its State Parties in this situation “sends a very unfavourable message to other civil society organisations working actively on the ground, especially in situation countries to which the ICC has no access”.

The statement reiterated that: “If colonial Occupying Powers will be allowed to interfere, influence and even outlaw human rights organisations under baseless allegations of terrorism, then we can only envisage a very dystopian future ahead of the human rights movement and international justice as a whole, in which victims will be abandoned, impunity will prevail, justice will be denied and the ICC itself could be rendered irrelevant”.

Watch a video of the statement here