672 European financial institutions have financial relationships with 50 businesses that are actively involved with illegal Israeli settlements. These financial institutions provided US$ 114 billion in the form of loans and underwritings and held investments to the amount of US$ 141 billion in shares and bonds of these companies. This is the key finding of a new research report published today by a cross-regional coalition of Palestinian and European NGOs, which looked at financial flows between January 2018 and May 2021.

The “Don’t Buy into Occupation” (DBIO) coalition is a joint project between 26 Palestinian, regional and European organisations based in Belgium, France, Ireland, the Netherlands, Norway, Spain and the United Kingdom (UK)[i]. The coalition investigates the financial relationships between businesses involved in the illegal Israeli settlement enterprise in the Occupied Palestinian Territory (OPT) and European Financial Institutions (FIs).

Israeli settlements are illegal under international law and constitute acts which incur individual criminal liability as war crimes and crimes against humanity under the Rome Statute of the International Criminal Court (ICC). Yet European financial institutions continue to invest billions into companies that are actively involved with the Israeli settlement enterprise.

Research by the DBIO coalition shows that between 2018 and May 2021, 672 European financial institutions, including banks, asset managers, insurance companies, and pension funds, had financial relationships with 50 businesses that are actively involved with Israeli settlements.[ii] US$ 114 billion was provided in the form of loans and underwritings. As of May 2021, European investors also held US$ 141 billion in shares and bonds of these companies.

These businesses and financial institutions play a critical role in facilitating the economic viability growth of the Israeli settlement enterprise. As the UN Special Rapporteur on the situation of human rights in the Palestinian Territory occupied since 1967, Michael Lynk, writes in a foreword to the DBIO report: “The involvement of these corporations with the settlements – through investments, banking loans, resource extraction, infrastructure contracts and equipment and product supply agreements – provides them with the indispensable economic oxygen they require to grow and thrive.”

These businesses, creditors and investors have a responsibility to ensure that they are not involved in violations of international law and are not complicit in international crimes, and to address any adverse human rights impacts arising from their business activities and financial relationships. 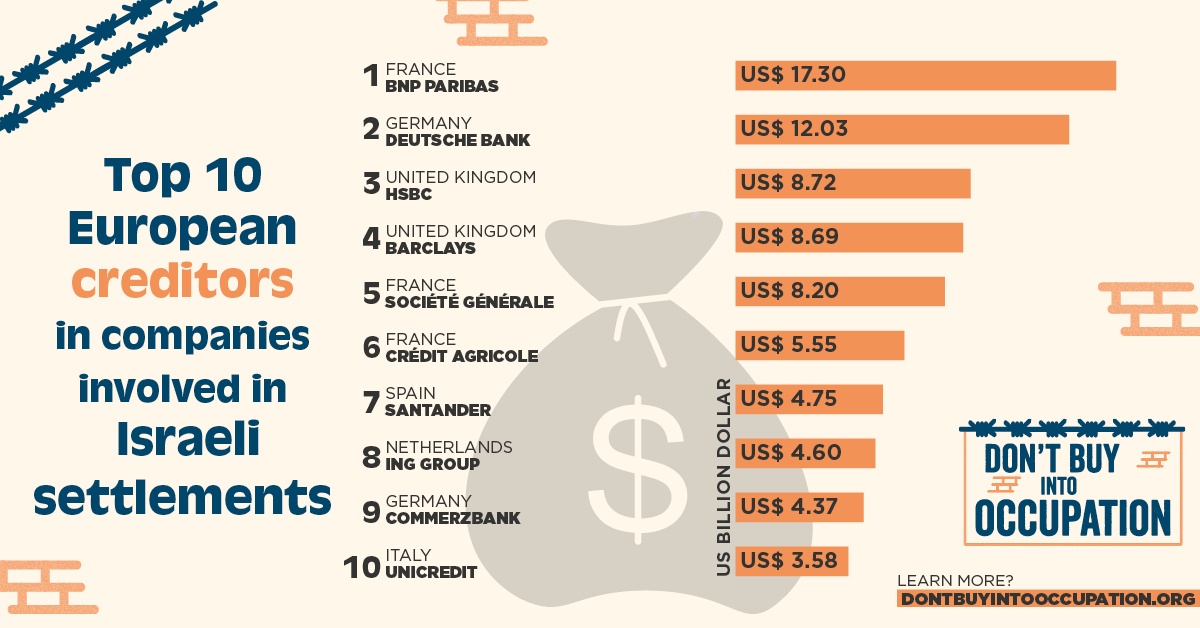 Companies are expected to have a rapid response and to consider responsible disengagement. International financial institutions, including banks and pension funds, have a responsibility to use their leverage to ensure their investee companies act responsibly and in line with international law standards, and to divest from those who are unable or unwilling to do so. 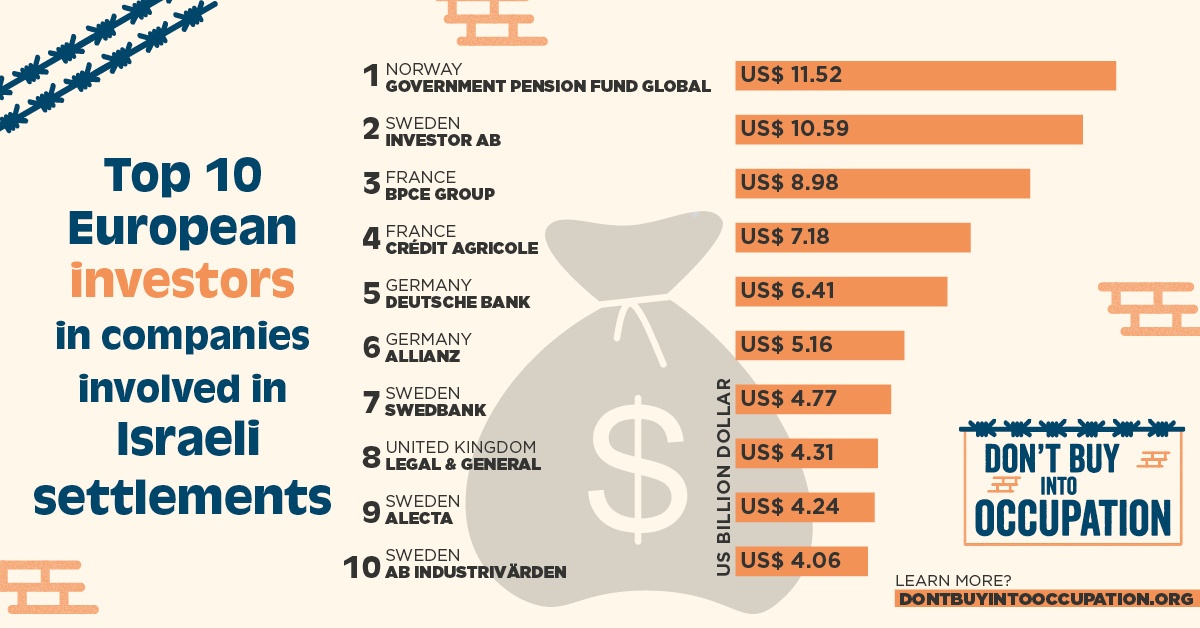 Recently, several financial institutions and companies have taken up their responsibility by divesting from business enterprises linked to Israeli settlements. The two most recent and important examples are those of Kommunal Landspensjonskasse (KLP) and the Norwegian Government Pension Fund Global (GPFG). KLP is Norway’s largest pensions company, who in July 2021, divested from 16 companies linked to Israel’s settlement enterprise. In a similar vein, GPFG announced in September 2021 that it will exclude three companies that are actively involved with Israeli settlements. The 19 companies excluded by KLP and GPFG were listed in the UN database of businesses involved in certain activities relating to Israeli settlements in the OPT, mandated by the Human Rights Council in 2016, and published in February 2020.

The full report can be found here.

Note: The report shows investments in a company at the group level, regardless of other activities or the percentage of turnover it derives from settlement-related activities. It is impossible for a financial institution to be sure that the financial services it provides to a company will not be used for activities linked to the settlement enterprise.